JetBlue Fired Kalina Collier Over Hostage Hoax In Jamaica? Everything You Should Know 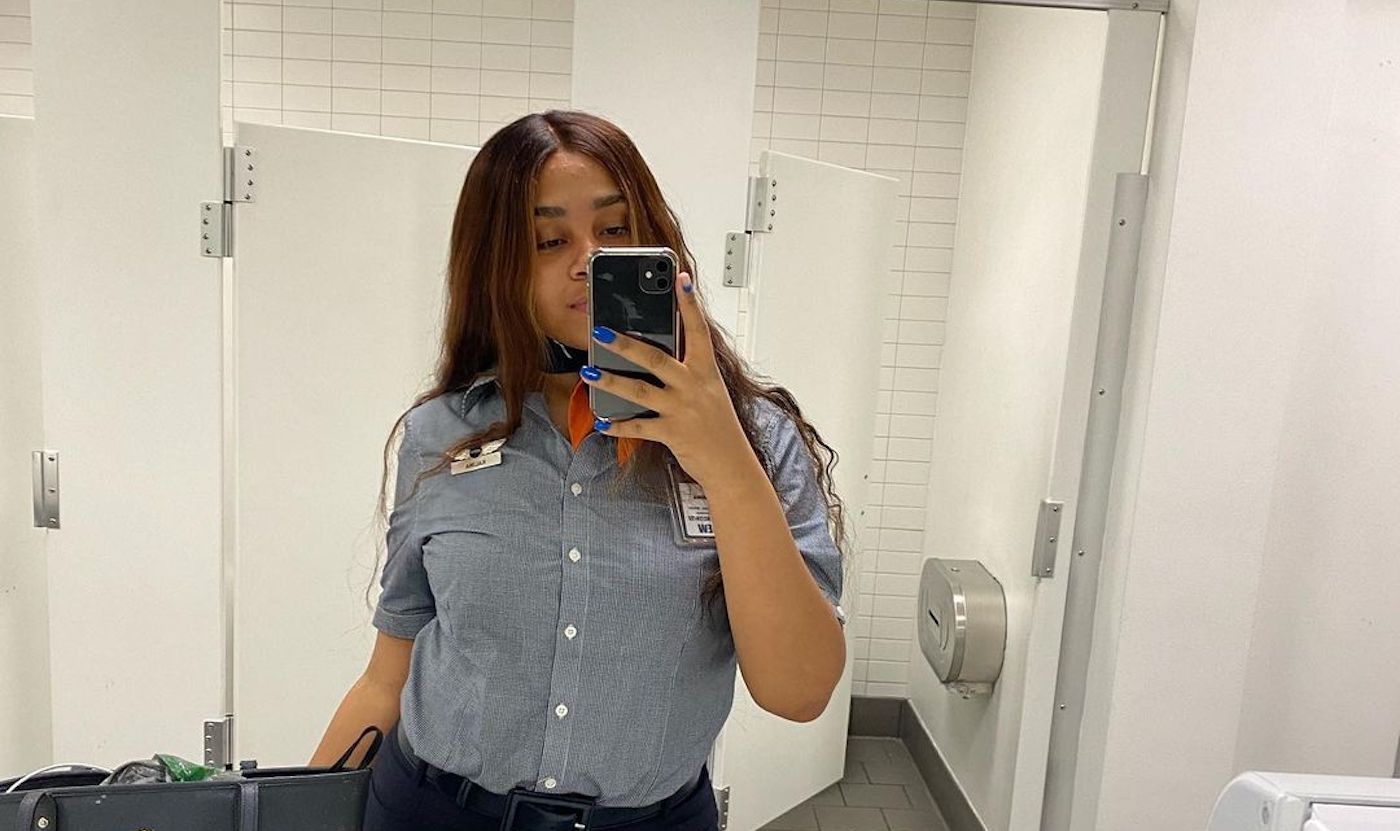 Kalina Collier, the JetBlue Travel Agent that faked her kidnapping in Jamaica in order to avoid being quarantined after she positive for Covid-19, has been fired by her employer.

The former flight attendant made several videos that she uploaded to her social media accounts, claiming that her covid positive tests were fabricated because the government and hotel wanted to keep her at the hotel. Collier insinuated that authorities were holding her for sex trafficking or organ trafficking.

Her followers also implied that the government was holding her because there was a monetary incentive for quarantining tourists, which is inaccurate as the government via taxpayer’s expense and the tourism enhancement fund offset the expenses of those who quarantine, which include food and shelter.

Collier arrived in Jamaica on January 28 and was scheduled to depart on February 1, 2021. As part of the new travel protocols instituted by the United States President Joe Biden to curb the impact of the covid-19 pandemic in the U.S., anyone, whether citizen or visitor who are arriving in the United must submit a negative Covid-19 test to airline authorities before they can board.

In her preparation to travel, Collier did an antigen test that returned a positive result for COVID-19. Not accepting the result, she did a second test an hour later, which tested negative. Usual Ministry health protocols to rule out false positives testing is for a PCR test to be done. The PCR test is a swab that goes into the nose all the way to the back of the throat, which is determined to be a more accurate test, although uncomfortable for some. It is far more reliable than an antigen test that uses saliva.

On February 2, the PCR test result came back positive, which led to a quarantine order being given for her. Collier, not being happy with the tests, took to her Instagram account as she claimed that there was some sinister reason for wanting to keep her in Jamaica as the test is fake and she isn’t sick.

Among those, she reached out to include many YouTubers and social activist Amanda Seales as she alleged she is being held in Jamaica against her will. Soon the hashtag #FindKalinaCollier started trending as friends and family members went online to say they can’t find her or haven’t heard from her.

Collier herself released a video using her cellphone, saying she didn’t know what date it was or what time it was. She also made several videos as she alleged that there were cameras in her room to watch her.

A leaked email from an unknown person but supposedly from the U.S. Embassy in Kingston was sent on February 11, 2021, to the Prime Minister of Jamaica Andrew Holness, along with several persons from JetBlue, New York City state troopers, the office of the City of Chesapeake, various international news media in the U.S, Britain, and Jamaica, the NAAP and even the United Nations Human Rights Committee.

The email alleged that U.S. citizens Collier and her mother Candace Page were missing on the island of Jamaica and that they have been reported missing to Interpol and the FBI. The email said it is suspected that Collier was “auctioned off for human trafficking” as there are cameras in her room.

The entire email read, “this is the last I.G. video she posted before her account was deactivated. Her brother called and a man answered the phone. This has been reported to the Falmouth police; they have been reported missing to the FBI and INTERPOL. Kalina Collier and Candace Page were at the Ocean Coral Spring Resort in Trelawny. Please help us find them we are concerned for their safety and well-being. We suspect she was auctioned off for human trafficking as there are THREE CAMERAS IN HER HOTEL ROOM. I will be contacting the governor of her state and news media around the world until they are found. She is a JetBlue flight agent who has not reported back to work.” 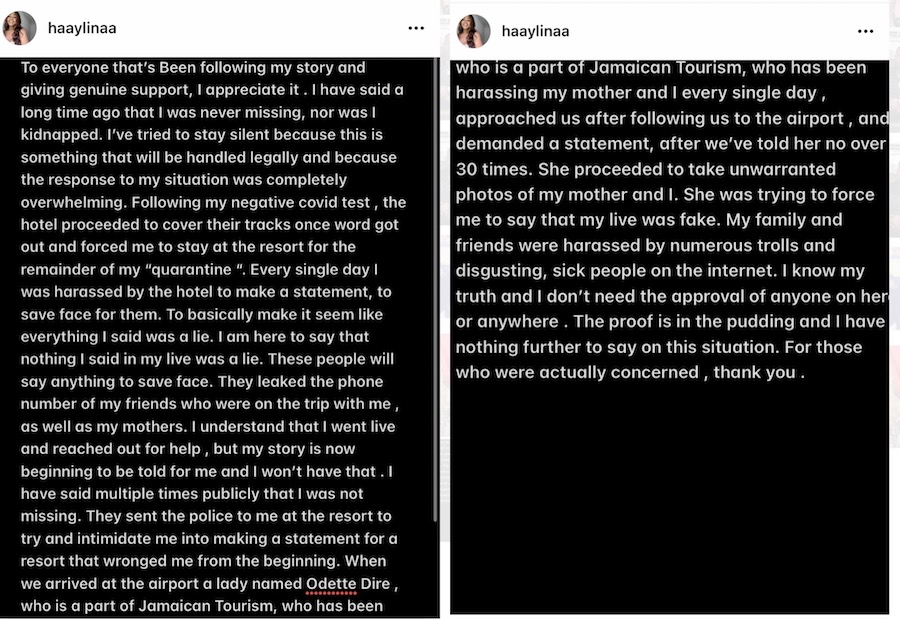 In fact, Collier deactivated her own account after posting videos that there were cameras in her room, which many social media users quickly identified as motion sensors and smoke detectors as found in all modern hotels as required by Jamaican building code laws. The backlash from followers who initially took her side led to silence. However, according to hotel staff and the Jamaican police- Collier refused to put out a statement that she was fine and was not kidnapped. The hotel further provided video evidence to show that Collier was seen leaving every day in a Mazda car as her mother picked her up from the resort.

Further, the agents from the Jamaica Tourist Board who tried to assist Collier and her mother have since received death threats from people associated with Collier.

Jamaican police also released a statement advising the public of the situation. “The Police are advising members of the public to dismiss as rumour information that has been circulated via social and other media that American National Kalina Collier was kidnapped in Jamaica. The police assert the information is baseless and mischievous,” a statement from the Jamaica Constabulary Force reads. “On arrival in Jamaica, Collier who was tested positive for the Covid-19 virus was placed in isolation. This is in keeping with Jamaica’s Covid-19 prevention protocols as stipulated by the Ministry of Health and Wellness. She remains in isolation and awaits medical clearance to be able to travel back home. The Police are therefore warning persons to desist from sharing social media posts claiming Collier has been kidnapped, as sharing false information can constitute an offence under the law.”

February 14: Kalina Collier and her mother cleared to fly from Jamaica

Collier was cleared to leave Jamaica on February 14, 2021, when she completed the 14-day quarantine and was allowed to leave. However, the damage left in her wake means that Jamaica is scrambling to repair its reputation worldwide as a safe destination. What made Collier’s situation believable was fueled by the fact that Jamaica has a high domestic crime rate. However, in spite of this, tourists are relatively safe. In fact, the government of Jamaica says of its 5 million people coming to the island in 2017- more than half of those are return visitors who come to Jamaica annually. The government has not stated any action to be taken, although there have been recommendations to declare her persona non grata, which would effectively ban her.

Collier’s action is also going to be very costly for the Ocean Coral hotel, which was bombarded with negative reviews online by people from the #freekalinacollier movement in a time when the local tourism industry hangs by a thread and employment remains unstable for many due to the dip in travel tourism that Jamaica relies on for a large part of its GDP.

In addition, staff members who came into contact with Collier will also need to seek medical attention after Collier said she “coughed on everyone,” as she was displeased with being quarantined.

“After an investigation, the crewmember in question is no longer with JetBlue. We continue to offer our apologies for the frustration and concern this incident has caused and reiterate our confidence in the health protocols Jamaica has put in place,” Derek Dombrowski, Manager of Corporate Communications of JetBlue, said in a statement. “We deeply apologise to the people of Jamaica and the Jamaican government for the concern and frustration this incident has caused.”

Comment by Inez Malone on February 19, 2021 at 8:38am
What does this statement hve to do with this situation she faked an abduction what does football and sports have to do with what she did?

Hey, virtual games Duck dice are simulation of football, basketball, hockey and other matches, tennis tournaments in accordance with the rules, principles and canon in real sports. The result for virtual sports is generated by a set of random numbers and depends only on the theory of probability. The advantage of virtual gambling is the short duration of matches, 24/7 availability and no “agreements” between teams. But it is impossible to predict the victory of a team or a player, so you can only count on luck.

Comment by Inez Malone on February 19, 2021 at 6:29am
There are consequence for bad behavior mom this is how u taught your daughter?wow

Comment by Roots aka TJ What De Ras on February 17, 2021 at 3:36pm
Damn well she caused this upon herself