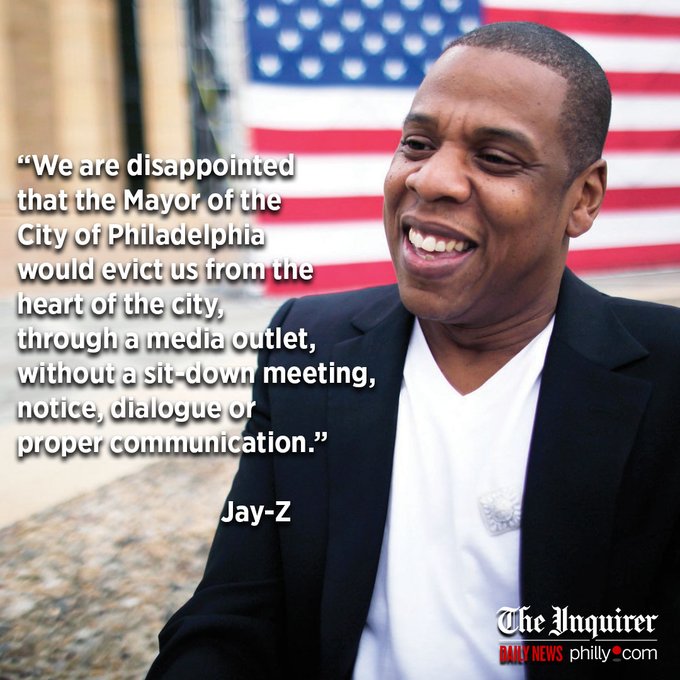 The City of Brotherly Love is showing Jay-Z’s Made in America Festival no love and the Philadelphia Mayor planned to kick the event out of the city after September.

It’s a move that has angered the Roc Nation CEO who wrote an Op/Ed in the Philadelphia Inquireron Tuesday, slamming Mayor Jim Kenney and challenging his decision to cancel 2019’s Made in America Festival, after six years of success in the city.

Jay-Z fired off in his lengthy address:

“We are disappointed that the mayor of the city of Philadelphia would evict us from the heart of the city, through a media outlet, without a sit-down meeting, notice, dialogue, or proper communication,” he writes.

“It signifies zero appreciation for what Made In America has built alongside the phenomenal citizens of this city. In fact, this administration immediately greeted us with a legal letter trying to stop the 2018 event.”

“Is this an accurate representation of how he and his administration treat partners that economically benefit his city? Do they regularly reject minority-owned businesses that want to continue to thrive and grow alongside his city’s people?”

“How does an administration merely discard an event that generates millions in income and employs the city’s people as if we are disposable now that we have served our purpose? The city is right in one respect; the first Made in America festival took place when there was a great need for tourism. By their admission, the festival first started as a “unique attraction to the city on an otherwise quiet Labor Day weekend. Over the years, tourism has grown overall.”

The event has drawn major stars to the streets of Philadelphia including performers Beyonce, Rihanna and Kanye West, just to name a few.Variety reports that Kenney argued that the costs for the concert was too high, however, Jay’s Roc Nation company covered half the fees.

According to Vulture, since Jay-Z’s open letter took flight, Mayor Kenney’s office has walked back its plan to evict the Made of American event and says it is working to the mogul to mend its relationship. The statement reads:

“The City of Philadelphia supports the Made in America festival and is greatly appreciative of all that it has done for Philadelphia. We are committed to its continued success and thank them for their partnership. We hope to be able to resolve what has been an unfortunate misunderstanding. We are working with Roc Nation and Live Nation to resolve this issue and we are committed to continuing our partnership with the Made in America festival.”

I love the fact that Jay-Z responded with class to being moved from the successful weekend event in Philadelphia, I pray that everything is return to normal status as well.  (Two thumb up ) Jay-Z!

You see what happens when you respond intelligently? If that were others, there would of been a few f bombs...and foh-heres all through the statement Jay made...Well said and well played Jay Z...a real life business man fa sho..

Comment by Dicorn on July 20, 2018 at 7:39pm
Budweiser has sponsored this event for years. After him & the orange Mussolini had words, Budweiser dropped out. Eff them too! They should get Corona or Modelo as a sponser.

Comment by Anthony Phoenix on July 20, 2018 at 3:35pm
I was mad when I watch this story unfolding on my local news, although I'm not a Jay Z fan, I believe that the Made in America tour was going great without any reasons for concerns of this nature!

New York would gladly embrace you

Comment by S. Young on July 20, 2018 at 1:59am
When has he done any type of event for BROOKLYN like that? He assisted in the development of the Barclay Center but where are our annual music festivalsthat give local artists opportunities?

Eff them! Bring it home me to NYC.