'Even the greatest can fall': Jay Z and Beyoncé spark controversy by including Justin Bieber's mugshot in photo montage played during On The Run Tour 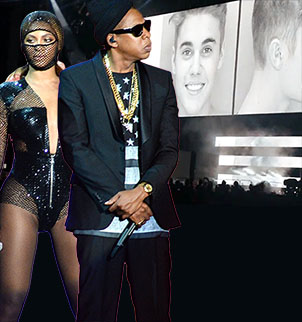 Jay Z and Beyoncé's On The Run Tour certainly got off to a roaring start.

From the dazzling costumes to the incredible 42-song setlist and even intimate never-before-seen footage of both their 2008 wedding and daughter Blue Ivy's birth, nothing is off-limits as they wow audiences with their amazing collaborative star power.

But during Wednesday's opening night concert in Miami, the pair got people talking for a whole other reason when 20-year-old singer Justin Bieber's mugshot was included in a montage of infamous celebrity jailhouse snaps projected onto huge screens as Jay performed hit song Izzo (H.O.V.A.)
to the packed stadium. 'Even the greatest can fall': Jay Z's decision to include Justin Bieber's mugshot in a montage of famous faces during his performance of Izzo (H.O.V.A.) during Wednesday's opening night On The Run Tour show in Miami has divided fans of the 20-year-old's, with some calling it a diss

While Justin was undeniably in good company, featuring among such greats as Tupac, P Diddy,
50 Cent, Robert Downey Jr, Russell Brand and even Jay Z himself, some diehard Beliebers have dubbed his inclusion a diss.

Of course, the star has been in plenty of trouble with the law of late, from egging his neighbour's house to allegedly drag racing while under the influence in Miami back in January - which is when
the mugshot was taken.

According to concertgoers, as Bieber's image lit up the screen, Beyoncé said: 'Even the greatest
can fall' - which again, critics have taken both ways.

A number of fans were up in arms that the couple had seemingly 'disrespected' their hero, taking
to Twitter to slam the allegedly underhanded move. Bringing down the house! The 44-year-old rapper's joint tour with wife Beyoncé got off to a roaring start, with concertgoers and critics alike won over by the pair's 42-song setlist and dazzling outfit changes, along with the intimate never-before-seen footage of their wedding and daughter Blue Ivy's birth

'The fact that @justinbieber's mugshot was shown at @Beyonce's concert followed by "even the greatest fall." that's just f*****,' one angry user wrote, while another suggested, 'Justin is gonna freak'.

However, others thought it more of a tribute than an insult, with one follower commenting: 'She is totally right. Respect,' while another explained: 'She was proving a point, it was not an Insult.'

Though he is yet to publicly comment on the alleged diss, Justin's actions seemingly proved that
he wasn't in the least bit offended by his inclusion and was perhaps even a little proud of the accomplishment.

The Never Say Never hitmaker retweeted a snap posted by Twitter user @belieberbabes, which showed the singer's mugshot up alongside Tupac's, Bill Gates' and Rakim's - of hip-hop duo Eric
B & Rakim - with the caption: 'Justin's mug shot makes an appearance at Beyoncé & Jay Z's "On
the Run Tour." Wonder if he's excited lol.' No hard feelings? While Justin is yet to comment on his inclusion, he did happily retweet this photo posted by Twitter user @belieberbabes of him alongside Bill Gates, Tupac and Rakim, which had the caption, 'Justin's mug shot makes an appearance at Beyoncé & Jay Z's "On the Run Tour." Wonder if he's excited lol'

Other A-listers to have made it into the 44-year-old rapper's video compilation include Woody Harrelson and David Bowie, while both Jay Z and his 32-year-old wife's images appeared as the
03 Bonnie And Clyde collaborators morphed into the real-life American outlaws of the same name.

The couple's joint stadium tour is already a certified hit with both audiences and critics alike, just one show into the sold-out tour.

The pair will play in Cincinnati on Saturday night, before zigzagging across the States and Canada, prior to heading to France on September 12. Who runs the world? Jay Z and Beyoncé! The couple's sold-out joint stadium tour will play in Cincinnati on Saturday night, before zigzagging across the States and Canada, prior to heading to France on September 12 Like water off a duck's back: As the controversy over the mugshot pic gathered speed on Saturday, Justin appeared to be having a great time as he showed off his skills during the Sprite Celebrity Basketball Game during the 2014 BET Experience at LA Live

Hip-hop’s royal couple Beyonce and Jay Z kicked off their highly anticipated On The Run Tour in Miami last night.
The couple also had a few surprises for their legion of fans which includes Beyonce’s former bandmate Kelly Rowland and her husband Tim Witherspoon.
During their performance of Jay Z’s smash hit “Forever Young,” never before seen footage from their 2008 wedding was being played on a wide screen in the backdrop. They also shared video footage of their adorable daughter Blue Ivy Carter. The footage also show the couple getting their “IV” tattoo on their ring finger.
This is probably one of only a few times anyone get to see Beyonce in her wedding dress. She gave fans aglimpse in her music video for “I Was Here.”

Cosign @TIG. Our culture was never like that but that sort of thing happens when our minds become colonized and greed and envy take over.

I remember reading a book when I was 16 years old by Franz Fanon named black skin white mask whereby he explained that sort of thing. He diagnosed it as a mental disease coming from extreme trauma passed down generation to generation. we are a damage people, most of us don't know that so we can't fixed it. Knowledge is the key and as long as we know that we are on our way to recovery. Even Marcus Garvey talked about it in his book called psychic trauma . It is quite serious, it all happens at the sub conscious level. It explains all the petty bs alcoholism drug abuse that our people are suffering from it manifest it self in many ways.

Calling talented woman like Beyoncé jealous of a non talented less rich fake woman does not ad up.

When they chose to share their story is their decision, like any of us, but again wishing our own the best is hard for many of us because of lack of knowledge.

Comment by Carmen Johnson on June 28, 2014 at 4:12am
Beonce need to stay off the stage nd grab a comb nd brush to do Blues hair so she won't look like a little boy anymore.

Comment by Smiley on June 27, 2014 at 8:16pm
After all this time??? Friends in their circle getting married and they're fighting within: damage control!

Comment by lynz on June 27, 2014 at 3:47pm
Who knows why the hell they decided to show their wedding...and who cares. I'm not trying to analyze ppls reasons..& if they really are indeed jealous of K.K. something is really wrong with them both.