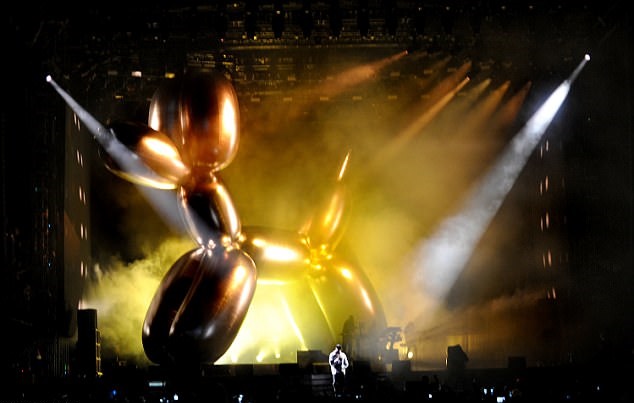 Jay-Z returned to the stage as he headlined V Festival in Staffordshire, England on Saturday night. He performed some 4:44 tracks live for the very first time, including “Kill Jay Z,” “The Story Of O.J.,” “Family Feud,” and “Smile.” Hov also paid tribute to his late collaborator Chester Bennington by performing “Numb/Encore”.

Next up for Hov is Philadelphia’s Made in America Festival, which he’s co-headlining with J. Cole, on September 2-3. His 4:44 Tour kicks off the following month on October 27. 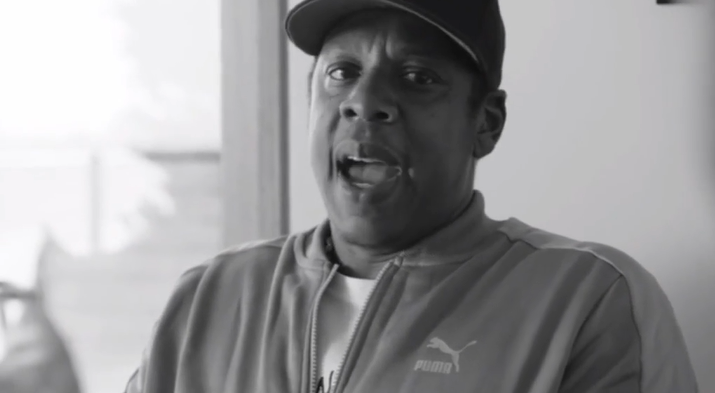 There had been rumors of tension between Kanye West and JAY-Z, but the world didn't know details until West ripped Hov during a November of 2016 in-concert rant.

West was angry that his longtime friend and collaborator hadn't visited him following his wife, Kim Kardashian, getting robbed in Paris.

"Jay Z, call me. You still ain't called me. Jay Z, I know you got killers. Please don’t sent them at my head," West said at the time.

The G.O.O.D. Music CEO also expressed frustration with Beyonce: "Beyonce, I was hurt 'cause I heard that you said you wouldn’t perform unless you won Video of the Year over me and [Drake's] Hotline Bling."

West's diatribe culminated when he questioned why Jay and Bey had not brought their daughter Blue Ivy over to play with his children.

Jay had been silent on the issue until a new interview with Elliot Wilson.

"What really hurt me is [you] can't bring my kids and my wife into it," Jay explained to Wilson. "Kanye's my little brother. He's talked about me a hundred times. He made a song called Big Brother. We've gotten past bigger issues. But when you brought my family into it, now it's a problem with me. That's a real, real problem. He know it's a problem 'cause me and him would have been talked about it. We would have been resolved our issue. He know that he crossed the line."

Jay-Z's "4:44" Album Has Been Certified Platinum 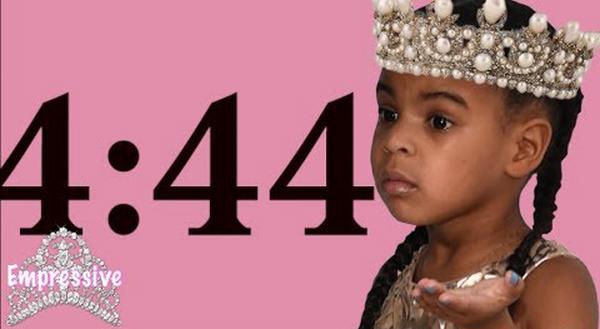 Move over emcees and make room for the new Princess of Rap. Beyonce and JAY-Z's 5-year old daughter, Blue Ivy, has made her rap debut. We honestly don't understand what the cute kid is saying other than "boom shakalakah," but she gets bonus points for having a flow.

Blue appears on a just released bonus song on the iTunes version of Jay's "4:44" album. The name of the song is "Blue's Freestyle/We Family." Give it a listen below.

Jigga APOLOGIZES To Beyonce . . . For CHEATING ON HER With ‘BECKY’ {Should Bey ACCEPT His Apology?} Jay Z's 13th studio album 4:44 which was released last week via his partnership with Sprint x Tidal has been certified platinum by the Recording Industry Association of America.

This makes Hov's 13th consecutive platinum LP release which is more than any other Hip-Hop artist in the history of RIAA’s Gold & Platinum Program.

His biggest-selling album to date, according to the RIAA, is Vol. 2... Hard Knock Life, which was certified 5x platinum.

Congrats to Jay-Z and Roc Nation!

Jay Z has officially APOLOGIZED to Beyonce for allegedly cheating on her. The rapper in at least THREE of the songs – has addressed his apparent infidelity to his wife, and offers his APOLOGY.

In the track ‘Kill Jay-Z’, Jay, he raps ‘You almost went Eric Benét / Let the baddest girl in the world get away’ – acknowledging that his behavior may have caused Beyonce to leave him.

Later in the same track, Jigga made reference his elevator fight with his sister-in-law, and admitted it was his fault.

Jigga rapped, “You egged Solange on knowin’ all along / all you had to say you was wrong,”

And finally, in the track “Family Feud” Jay rapped – “Nobody wins when the family feuds”. He added, “Yeah, I’ll f*c* up a good thing if you let me / Let me alone, Becky / A man that don’t take care his family can’t be rich.”

Look, I apologize, often womanize / Took for my child to be born / See through a woman’s eyes.

Took for these natural twins to believe in miracles / Took me too long for this song.

Like the men before me, I cut off my nose to spite my face / I never wanted another woman to know / Something about me that you didn’t know.

And if my children knew, I don’t even know what I would do / If they ain’t look at me the same / I would prolly die with all the shame.

‘You did what with who?” / What good is a ménage à trois when you have a soulmate? / “You risked that for Blue?

Jay Z: ‘We must use our platforms to demand social justice’ 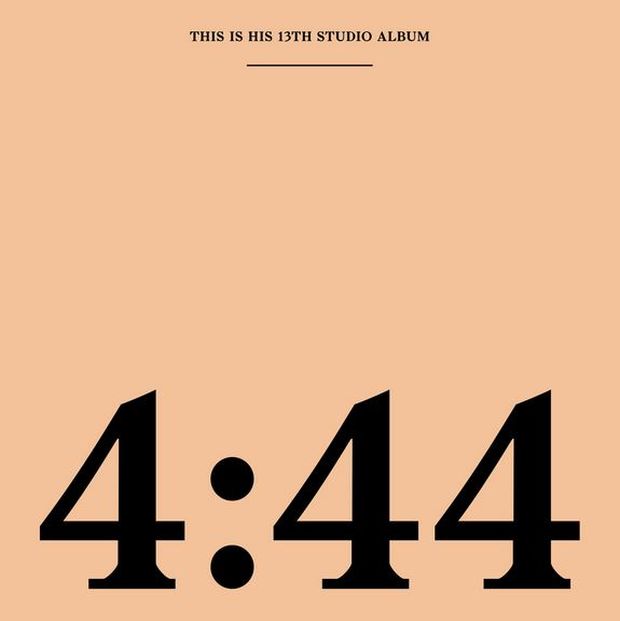 Jay Z is speaking up in order to encourage people to use their voices and their platforms to bring about a change for the better in terms of social justice.

“Look around at what’s happening in your town and your city right now. Think small and you can do much bigger things,” he wrote in a powerful essay for the Hollywood Reporter this past Wednesday.

He spoke of how he has used the resources available to him in order to tell the story of Kalief Browder, who committed suicide in 2015 after spending three painful years at Rikers Island for allegedly stealing a backpack.

“The power of one voice is strong, but when it comes to social justice the power of our collective voices is unstoppable,” Jay Z wrote.

“Now is the time to recognize that through our voices we really can affect change.”

“Some of us will do the important work locally at the micro level to awaken our neighbors,” he went on. “Some of us will work for progress regionally. And a few of us will be like Kalief Browder, a modern day prophet whose death two years ago started a discussion that continues today about how poor, black juveniles are treated in the criminal justice system.”

Jay worked with Harvey Weinstein to bring the documentary series “Time: The Kalief Browder Story” to television He said working on a project like this one made him realize that we “could raise our voices and create that collective we need.”

“We can work together to demand change from our elected government officials,” he said. “We put them in office, we make the laws, and we show them the path to progress. That is our power and it’s the only way that healing will come for Kalief and his family.”

Next on his plate is another project that will force us to look at the reality of race in America. The upcoming documentary will be called, “Rest in Power: The Trayvon Martin Story.”

“My hope is for my next documentary…to create a similar conversation that leads to change and helps keep our children safe,” he wrote in the essay. “But social justice isn’t a political issue it’s a human one. It’s a story of empathy. When we are able to identify that we are all not perfect and have compassion for someone else, we can move forward as a society.” 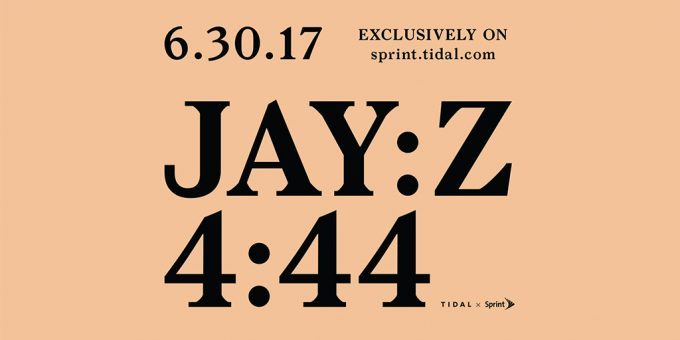 Jay Z has had a busy week.

In addition to recently being inducted into the Songwriters Hall of Fame, making Jay Z the first rapper to receive that honor, he and wife Beyoncé have also just had their twins. And on top of all that, he’s just announced a brand new album: 4:44.
However, this album won’t be available just anywhere but instead will be exclusively available to Sprint customers as well as anyone who subscribes to Tidal as part of a recently announced partnership between Tidal and Sprint.

“Today is an exciting day to be a Sprint customer,” said Marcelo Claure, Sprint president and CEO. “Jay Z is a global icon and we’re giving customers an incredible opportunity to be among the first to experience his new album 4:44. Our loyal, existing customers, and customers who switch to Sprint, can experience the album exclusively, plus access a complimentary six-month trial of Tidal HiFi, giving them access to content they can’t get anywhere else.”

Sprint and Tidal have also announced their commitment to the 1Million Project, which is focused on helping 1 million high school children in low-income areas that do not have access to the internet.
The announcement comes after fans have long been speculating that a new album is on the way, especially after posters and online posts saw the numbers “4:44” and the date “6.30.17” everywhere.

Love Yourself #BlackLoveMatters from Black Love Matters on Vimeo.

Our Master Teachers & Scholars Dr. Leonard Jeffries, Ashra Kwesi & Merira Kwesi , and the Late & Great Ancestor Dr. Yosef Ben-Jochannan know #blackwomenmattter while debunking #Europeans theory of Caucasians being the creators of Ancient #Kemet / #Egyptian Civilizations. On February 5th 2018 during the live broadcast on the TODAY show NBC’s Kelly Cobiella reports On Travel Channel’s “Expedition Unknown,” Josh Gates attempts to whitewash Queen Nefertiti, the mother of King Tut with a newly reconstructed bust that shows what Queen Nefertiti may have looked like if they could continue to rewrite African history with their myths & lies.

Comment by mr1stroke on August 20, 2017 at 12:20am
Thats why i dont get when they fight and kill each other they blame it on poverty, when they have money instead of getting together open up businesses that can help people tjey rather be fighting each other, and we are talking about grown ass mne, niggers are quick to compare their selves with white people, or blame everything on white people, but white people are busy get rich and congratulating each other. I dont even talk to a negro unless he or she has something to offer why would i waste my time beefing, they are nothing but distraction damn Niggers

Jay-Z Isn't Deep, and Neither Is His Album. His Job Is Social Control. 7/03

Comment by HandsomeMan on July 7, 2017 at 8:06pm
The OJ song is deep.
My skin is black.
A song that every black person should listen and can take advice from. I am the new Jay z fan.

who dafck cares about her making her rap debut? If people are excited about this little girl, they need a life and priorities...put your energy in your own children's lies like checking theri homework, talking to them instead of at them, holding them and telling them how much you love them, no matter what----make them feel blessed---FCK Blue Ivy

4:44 that album title is deep... when you see this number make note that something important has happened which needs to be understood. Number 444 is 12 and 3 in numerology, it represents the working universe and how you relate to it, meaning there is something that needs your attention and you should get it.