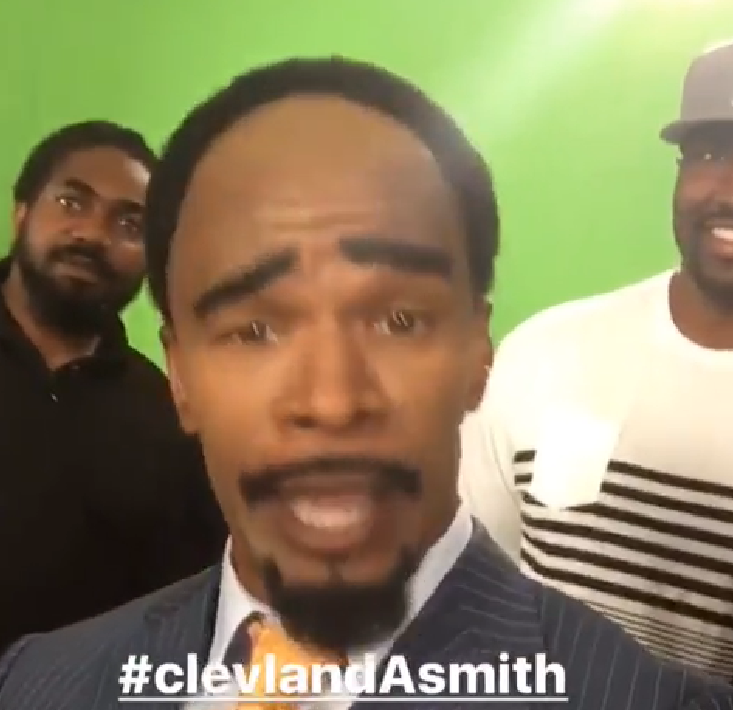 Comedian and actor Jamie Foxx had some fun at the expense on Stephen A. Smith on Tuesday. Watch as he impersonates the ESPNhost's "twin brother," Cleveland A. Smith.

Jamie Foxx didn’t fight Floyd Mayweather, but social media has clobbered him for his rendition of the National Anthem before Saturday’s fight between Mayweather and Manny Pacquiao in Las Vegas. The Grammy Award-winner got knocked out hard on Twitter for his lackluster performance of the Star-Spangled Banner.

In fact, Foxx trended on Twitter for hours, while Mayweather, who beat Pacquiao in a unanimous decision, did not. A Twitter user, who goes by Campbell, wrote, “The only fight that took place in that ring was between Jamie Foxx & the American national anthem.” “maypac should’ve been the undercard, the real fight was Jamie Foxx vs the National Anthem,” echoed another Twitter user by the name of Keith.

A woman by the name of Regine tweeted, “So can we talk about how horrible Jamie Foxx’s performance was?” Similarly, a Twitter user named Kathleen commented, “If there’s anything we all learned from this, it’s that Jamie Foxx can’t sing.” Taja felt, “Jamie Foxx, you tried but that anthem was dreadful to watch.” And a guy named Mitchell expressed, “Let’s all just erase Jamie Foxx’s appearance from our collective memory.”

And those were hardly the meanest tweets about Foxx’s singing on Saturday night. Check out the video below of Jamie Foxx singing the National Anthem before the Floyd Mayweather-Manny Pacquiao fight, and tell us what you think.

Comment by Kat on May 8, 2015 at 1:06pm
Didn't like it at all, when I saw him Mary J I thought she was going to sing,very disappointing

Ha!Yea Dexter the only chance he will get is if he sing it for his town sporting events or BET award shows.

Comment by Dexter on May 5, 2015 at 10:42pm
I don't know Rashid, I think Jamie should be banned from singing the anthem like Janet is banned from the superbowl


Jamie Foxx explains why his anthem was a ‘little off,’ impersonates Floyd Mayweather

Jamie Foxx sings the national anthem of the United States of America before the welterweight unification championship bout between Floyd Mayweather Jr. and Manny Pacquiao on May 2, 2015 at MGM Grand Garden Arena in Las Vegas, Nevada. (Photos by Al Bello/Getty Images)

Jamie Foxx has seen the tweets, memes and screams concerning his rendition of the national anthem at Saturday’s Mayweather Pacquaio fight.

The comedian wants everyone to at least know one thing: “We still love America.”

Foxx joked with Ellen Degeneres about what went wrong during his performance. He said his “inner ears” came out and he couldn’t hear his organ player while he was singing.

Watch Jamie Foxx explain what happened during the anthem below:

Sure Jamie, we got you. Maybe you can redeem yourself at the rematch.

I don't know why this comes to mind

Comment by colley on May 5, 2015 at 8:17pm
He could have sound better melody was like a church song

Comment by rashid rourk on May 5, 2015 at 10:00am
I can only imagine what the Caucasians were saying about him.

Comment by Dexter on May 5, 2015 at 9:31am
Buffer & Jimmy Lennon did the announcing together on all the fights if I remember correctly. It was definitely a historic moment seeing the showtime/HBO announcers & commentators working together. I said the same thing about Jamie trying to add soul to the song. I've seen some black singers pull it off but I think Jamie may have been trying too hard to change the song up & confused all the white people in the audience. I could here them saying "hey the song doesn't go like that a******".