After allegedly being involved in a fight at an LA restaurant this weekend, Jamie Foxx posted a light-hearted clip showing that he is fine.
At the beginning of the clip, he can be seen holding a cloth to his eye, and when he removed the cloth, his eye appears to be crossed … until he looks right at the camera and grins.
“I’m just f*****g with y’all, man. Everybody’s good. This is 2017; we don’t want no violence.”
He then easily transitions from speaking about violence to showing off the poster for Sleepless and telling everyone to go see it.
According to witnesses who saw the altercation, Foxx was eating with Tyrin Turner, his barber Conrad Hilton, and other friends when they were approached by another patron to ask them to be quieter. Things allegedly got heated, and witnesses claim the man said, “You don’t want to mess with me. I’m from New York.”
“F*** you, I’m from Oakland,” Foxx allegedly replied.
That’s when things reportedly became physical, as witnesses say the man lunged at Foxx. However, from there, the accounts are garbled, with some saying Foxx put the man in a headlock and others says Foxx didn’t touch him but instead had his friends deal with the problem.
You can check out the clip of Foxx below! 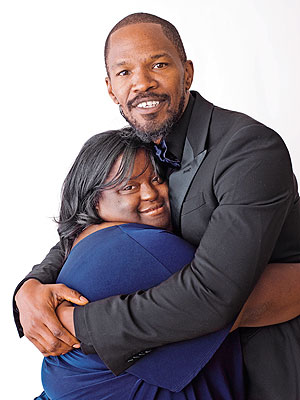 Jamie Foxx has always looked after his kid sister DeOndra Dixon, who has Down's syndrome.

The 47-year-old Django Unchained star lent his power presence to help her and others who suffer from the genetic chromosome disorder as he attended a gala to benefit the Global Down Syndrome Foundation in Denver, Colorado.

Jamie and DeOndra practically stole the spotlight at Saturday's festivity as they smiled for the cameras posing back-to-back in that stance that had 'I got your back' written all over it.

Foxx couldn't resist giving his 31-year-old sibling a warm hug on the red carpet as they strolled to the festivity entitled Be Beautiful, Be Yourself Fashion Show.

The actor, who has also turned out a string of hit songs including this year's You Changed Me and Fall For Your Type from 2011, displayed his entertaining talents at the show too. At one point, Jamie brought out his six-year-old daughter Annalise and DeOndra for a chat on stage.

The event raised a record $2 million - in the past seven years the annual show has brought in a total $12 million.

'Global really gets down to business when it comes to bringing awareness to Down syndrome,' Jamie said in a statement.

'I always lose the dance battle because she's got the good moves,' Jamie said after that show.

Foxx has always had a soft spot for DeOndra, who is the daughter of the actor's mother Annette and his stepfather George Dixon.

When DeOndra was born, the then-16-year-old held her in his arms adoringly.

After Foxx became a star in the early 2000s, he invited his family including DeOndra to live with him in Los Angeles.

'I'm happy to have a big brother to count on, who I love every day,' DeOndra told People. 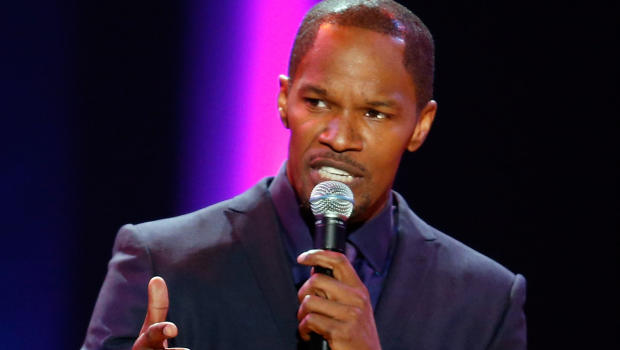 A joke that Jamie Foxx made while onstage during the 2012 Soul Train Awards has gotten him in hot water with some religious groups.

Many in the audience found humor in the joke, but not Rick Warren, pastor of Saddleback Church in southern California and author of "The Purpose-Driven Life."

“That sent shivers up my spine,” Warren said, according to The Examiner. “There’s a word for that – it’s called blasphemy. It’s wrong. That’s called creating an idol. Idolatry is forbidden by the first two commandments of the Ten Commandments."

Bill Donahue, the president of the Catholic League for Religious and Civil Rights in the United States issued a statement regarding Foxx's comments.

"Foxx’s epiphany is startling. It just goes to show that even though Obama did not succeed in stopping the oceans from rising (as he promised to do in 2008), he did succeed in convincing Jamie Foxx, and no doubt legions of others, that God exists," Donahue wrote. "Whether God can survive an ACLU lawsuit accusing him of violating church and state grounds remains to be seen."

Donahue also points to a 2011 interview where a reporter asks Foxx what God means to him. He responded by saying: “What does God mean to me? I don’t know, what does he mean to you?"

Fox News also got in on the debate during a recent segment on the Sean Hannity Show. "The intellectually superior don’t need the crutch of religion," said radio host and Fox News commentator Mary Walter. "Those of us clinging to our guns and religion… we’re somehow less evolved. It’s about a societal religion as opposed to a church religion, because if the government gives you everything, the government becomes your religion, and he’s our leader.”

Foxx has responded to the uproar in an interview with ET's Nancy O'Dell. "I'm a comic," Foxx says, "[and] sometimes I think people get a little too tight. And, it's getting a little tougher for us comedians [because] some people take it and want to make a huge story out of it, but it's a joke."

Is this all a big fuss over nothing? Or do the religious groups have a point?

Information from the Huffington Postwas used in this article

Comment by Quentin Archer on January 10, 2017 at 6:55pm
It's really be coming a problem with saying anything because people take everything to serious, stop minding other people and take care of yourself.

Didn't Hillary say something similar in one of her campaign speeches?

@Evo, I am inclined to agree with the X choice, but some can't handle that. And again the same way X said Fk the white man if he doesn't want us around, I feel B.O should do the same politically and end the War on Drugs & have Eric Holder start threatening these racist criminal laws that our people have suffered for so long. So with you view on MLK, I think B.O. should sit right next to him cause he's doing the same thing. It also upsets me because he has read X, he still does what he does..