Jameis Winston Vs. Marcos Mariota: Who Would You Pick As Your NFL Franchise Quarterback? (Video) The biggest question going into the 2015 NFL draft is which teams will pick quarterbacks Marcos Mariota and Jameis Winston.

It's very hard to predict which one will have a better pro career, but they both have the potential to be franchise leaders for the next decade.

Both are former Heisman Trophy winners. Winston won it in 2013 while playing for Florida State. Mariota, the former University of Oregon quarterback, took home the trophy in 2014. 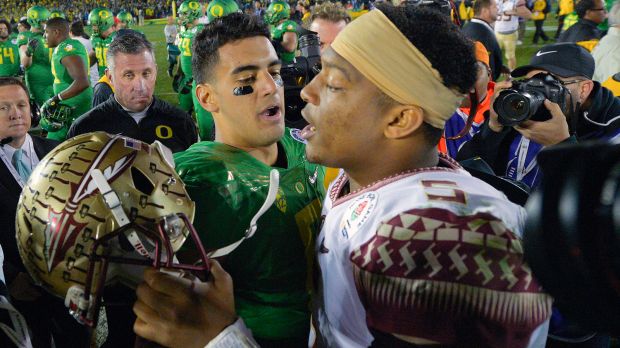 The Tampa Bay Buccaneers hold the number 1 overall pick in the draft, followed by the Tennessee Titans at number 2. Both teams are in need of a quarterback. Most draft experts have Mariota and Winston going either 1 or 2.

Character issues and a recent report that his right shoulder is weak may prevent Winston from going 1st. However, he looked great at the NFL combine over the weekend and comes into the league already knowing how to run a pro-style offense.

The only question about Mariota is will he be able to successfully make the transition from running a college spread offense to commanding an NFL offense.

If your were an NFL general manager who would be your pick?