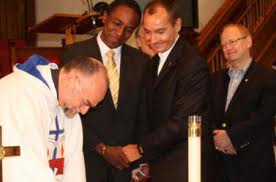 Tomlinson is a leading gay activist in Jamaica — the only country in the Western hemisphere where gay sex is still illegal.

In Toronto, he married Tom Decker, a police officer-c**-pastor in the Metropolitan Community Church of Toronto.

The UN’s former special envoy for HIV/AIDS in Africa was the best man. Hawkes married them. Tomlinson wept with joy throughout the ceremony, but he didn’t invite any of his family out of fear.

Talk about a double life.

“In Canada, I have a husband,” he told me from their little red-brick row home in Toronto’s east end. “In Jamaica, I have a good friend.”

In the past year, Tomlinson has received three death threats for speaking out against the country’s virulent homophobia.

He’s stopped going to parties and bars and public beaches, he says.

He’s right to be scared. Vigilante justice against gay men is common in Jamaica, a country where 82 per cent of people self-identified as homophobic in one recent survey. Last year, two men were chopped to death with machetes because they were gay.

Former Prime Minister Bruce Golding was openly homophobic: he said he’d never appoint a gay person to his cabinet. According to the law, consensual sex between two men in Jamaica will get you 10 years of imprisonment and hard labour. Any “act of gross indecency” — like kissing — will get you two years.

The law is rarely enforced. More often, police use it for extortion, Tomlinson says. But its very existence fuels the mobs, machetes in hand, since gays are legally criminals. Even the police officer who recorded his first death-threat report “went on a tirade that he hates gays, who deserve to die,” says Tomlinson.

For two years, Tomlinson has collected victim reports as a legal adviser for Lewis’ international advocacy organization, AIDS-Free World. Now, he’s taking them to the Inter-American Commission on Human Rights, since the Jamaican charter protects the laws against “sexual offences” from constitutional review.

“There’s an African proverb: you are mopping the floor while the tap is still running,” says Tomlinson, 40. “If you don’t change the law, you’ll never change the attitude.”

The commission is likely to hear his petition this spring. Even though it has no authority over Jamaica’s parliament, it will be a big moment for the island’s underground gay community.

Dirty laundry for all to see.

There is other good news. On Jan. 29, Tomlinson will be in England to receive the inaugural David Kato award for gay human rights activism. Kato, a Ugandan gay activist, was murdered last year. The award comes with a $10,000 grant that Tomlinson plans to use to give Caribbean police officers anti-homophobic training.

And, last week, Jamaicans elected a new prime minister, Portia Simpson Miller, who pledged to put the country’s anti-sodomy law to a vote in parliament.

“Justice will out!” Lewis wrote me in an email. “I genuinely believe this would not have happened had Maurice not spent the last two years on a personal crusade to convert Jamaica to tolerance.”

Tomlinson is less optimistic. He is sure parliament will be swayed again by the powerful evangelical churches and that machete mobs will continue unabated.

Change both seeps and charges. Just think: 11 years ago this month, Hawkes performed the country’s first gay wedding, wearing a bulletproof vest under his clerical vestments.

Looking at the freckles that splash down Tomlinson’s left cheek like sugar grains, I wonder how anyone could hate a man this breathlessly beautiful. He’s worried he’ll be dead by the time gays are no longer criminals in Jamaica. He’s applying for Canadian citizenship, he tells me. We’d be lucky to have him.

But I hope he stays in Jamaica.

That country needs him more.

Comment by Kiana on January 12, 2012 at 9:17pm
Comment by Kiana 1 second ago
Delete Comment
I don't understand why a different opinion sparks so much venom? The beauty of the country is the freedom to choose, speak, assemble and worship as one pleases. My personal views on homosexuality should have no bearing on citizens are treated as far as the law goes. There's no need to wish harm on anyone...and to those who are being rude towards me, I'd much rather add to the discourse with you than to skip over the really disrespectful things you write.

Comment by Bombahdrop on January 12, 2012 at 8:44am
What happened thought you was off to work, did they cancel your community service in the park due to heavy rains

Comment by Bombahdrop on January 12, 2012 at 8:37am
Who the f*** in thier right mind promotes Batty Mon bizness, I know who ,kianas wrinkle behind,mifucked up life n that other . You sick Demons are goning beside yourself to believe this is appropiate in mankind. Foolish soul you soon burn for believing supporting and promoting badmind behavior.

Comment by Bombahdrop on January 12, 2012 at 8:24am
Hahaha yeah right hoe,anybody interested in wasting time like these losers faking jacks do some worthless research and yoi will notice she and the rest of the Fools that follow do just that Entertain Foolishness bad behavor all negative s*** dem ah deal wit

Comment by One Love on January 12, 2012 at 8:20am
Wow you did not sleep? Have you notice the people you defend on the blogs often leave you on your own? That's because they know you ain't right in the head so they just use you as support.
by the way dark skin girls don't get wrinkles so stop hating on the dark skin sister. I told you before you can go get some butt shots considering you envy the curvy sisters, but before you do so go and get the GED so you can get a job to pay for it. Its never too late to improve.
I am off to work. We can fight later.

Comment by Bombahdrop on January 12, 2012 at 8:06am
I call u out everytime and you follow you a scrubb who follows me around whereever I go I even have you working for me digging dirt that your illiteraye ass cant even do so you make up s*** hahaha keep working boo I have more assignments for you since your teacher isnt teaching you s***.

Comment by Bombahdrop on January 12, 2012 at 8:00am
And u up all day n night losing sleep over me Ha you need to shut you f***** ass mouth up You Dick with ears Lovin mother f*****. Im to real for you niggabitch . Shouldnt you b getting ready for school, see thats y u still stuck in grade school , you illiterate no class havin lying ass.

Comment by One Love on January 12, 2012 at 7:00am
Stop lying.you up all night talking nonsense. Other than you and hateful jamrocklady who do I call out on the regular with the foolish talk? Who did I give the awards for 2011?
Let me remind you of the.awards.
Bombahdrop gets the No Class award.
Jamrocklady lady gets the award for most hateful racist.
Joshua Martin most annoying.

You all accepted it so why are lying.
Now bombahdrop its not hard to see why I gave you the award and now adding your promiscuous lifestyle so I have to revise.the award a bit.
Some days you know Jesus and some days.you don't. From last night to this morning you still acting up. Don't you pray or what I said is. Really getting to you?
Did.you start the GED classes yet?

Comment by Bombahdrop on January 11, 2012 at 10:52pm
Theres like twenty other people here that he says the same s*** to that he says to me . You need help to tell everyone you fight wit that they are prostitutes hookers strippers excetera excetera bunch of babbling is all you do stop poppin s*** you already stupid .