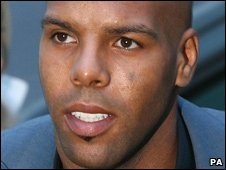 Marlon King's convictions today for sexual assault and actual bodily harm are the latest in a long list of court appearances stretching back 12 years.
London's Southwark Crown Court heard that since the age of 17 the Jamaica international has found himself in the dock on no less than seven previous occasions involving 13 offences. They feature dishonesty, drink driving and other motoring offences, and violence against women.

Only one, receiving a stolen £30,000 BMW, resulted in a prison sentence – 18 months reduced to nine on appeal. Apart from some community penalties, the other punishments were fines.

King's first brush with the law was in December 1997 at Camberwell Youth Court when he was convicted of wounding another footballer. At the time he was playing for a local Dulwich side. His victim was part of a St Thomas's Hospital team.

Magistrates heard how he grabbed his opponent round the neck and, as the referee booked him, returned to the attack with a head-butt and a punch in the face, fracturing his cheekbone. He was given an 80-hour community order and ordered to pay £250 compensation.

Two years later, at Tower Bridge Magistrates' Court, he was fined a total of £240 for two counts of theft and two of fraudulently using a tax disc.

In 2002 he was brought before Camberwell Green Magistrates for driving with excess alcohol and while uninsured. He was fined £650, ordered to pay £40 costs and disqualified from driving for nine months.

A week later at Greenwich Magistrates' Court he received a six-month community rehabilitation order and was ordered to pay £100 compensation for criminal damage and attempting to obtain property by deception. Later that year, at Inner London Crown Court, he was jailed for receiving the BMW Cabriolet.

A year after that he was at Bow Street Magistrates' Court for two counts of common assault. The court heard how a cab driver had called police about a "disturbance" in Berwick Street, Soho. When officers arrived they saw King chasing two women along the road with a belt and buckle wrapped round his right fist.

One of them explained he had attacked them for "no apparent reason", punching her in the face and causing cuts and swelling. He was fined £1,000, and ordered to pay £500 compensation as well as £100 costs.

His last court appearance was in 2005, again at Bow Street, when he was convicted of threatening behaviour. This involved him approaching a woman near Leicester Square, and again for "no apparent reason" spat at her. He was fined £300, and ordered to pay £500 compensation and £55 costs.

Comment by charles thomas on November 13, 2009 at 10:59am
first form of therapy jail,then while in jail some sort of professional help cause he has a problem and finally some stiff c-c* from his neighbors in jail.That should calm him down some lol.

Comment by Hailo on October 31, 2009 at 6:27pm
The problem is they need to stop fining him and put his a$$ in jail then I will learn his lesson. Cause pure man in deh feh beat-up pan him!

Comment by anna maria on October 31, 2009 at 7:27am
This guy make Jamaicans look bad. Rest assured not all Jamaicans spit on their blessing. He got his just desserts. Cow don't know the use of his tail until he loses it.

Comment by cynthia drake on October 30, 2009 at 9:51pm
In all actuality this man's fame has gone to his head, behaving a like a common criminal and has gotten a slap on the wrist.It's time for a change, how can change come about, give him 12 yrs in jail,since that how long he has been committing crime, and add 2 yrs as an out patient for the mentally ill.

Comment by vanessa thomas on October 30, 2009 at 5:25pm
he should be in jail or get professional heip ;he got alot of serious issuses.

Comment by Zakiya on October 30, 2009 at 2:19pm
This dude has some serious issues, and he should seek professional help. He has been lucky thus far...paying fines and 18 months in jail. His luck wiill run out soon, if he does not get his act together. He needs to address, why he has issues with women.

Comment by tania harris on October 30, 2009 at 11:31am
what is wrong with these people who are priveliged please for heavens sake behave urselves and make it bad for the rest of us

Comment by Andrea Brown on October 30, 2009 at 11:00am
it is amazing how these people have such a good life and take the time out to ruin it this is a shame any way one fool does not mean all jamaican are fools please keep up the good work