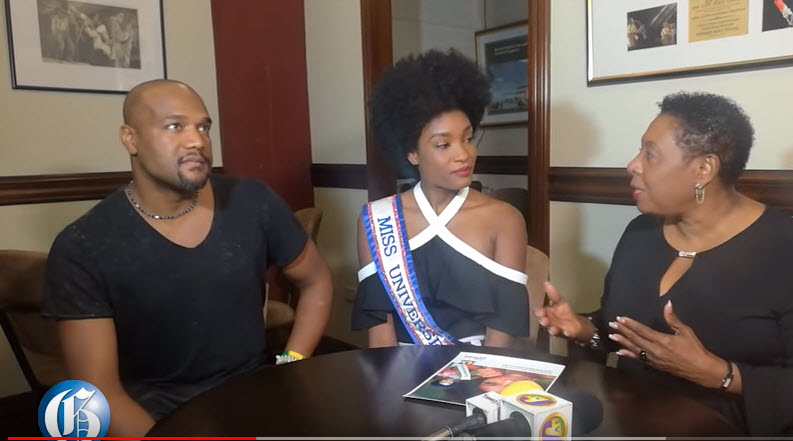 Jamaica's Davina Bennett was placed third from a field of 92 contestants, the highest ever in the Miss Universe pageant.

Miss Universe Jamaica Davina Bennett has been declared second runner up to the 2017 Miss Universe.

Bennett, emerged from a field of 92 contestants from across the globe.

Bennett, 21, was selected as Jamaica's representative for the 66th staging of the pageant after securing the crown at home back in August.

Currently a second-year marketing student at the University of the West Indies, Mona campus, Bennett has modeled for Pulse at London Fashion Week.

Bennett, who is from Clarendon has also established a foundation for the deaf.

In an interview with The Gleaner in September, Bennett revealed that she never thought she would one day represent her country on the world stage.

"I didn't think I could do pageantry. I was always afraid of speaking. I was more of a walk on the runway and come off type of girl, but I decided that it was time for a change. I started the foundation before Miss Universe. I needed a platform to have a voice for these persons who need my support. That was my main motivation going in, and what can I say? I'm the winner today," she said after Miss Universe Jamaica.

This year, Cambodia, Laos and Nepaul competed at the Miss Universe finals for the first time ever.

It was also the largest number of competing countries.

Margaret Gardiner won the title in 1978.

Nel-Peters is only the second South African to win the title after Margaret Gardiner won the title in 1978.

The 22-year-old business management graduate beat 91 other contestants to the title in Las Vegas on Sunday.

Laura Gonzalez of Colombia was the first runner-up, with Davina Bennett of Jamaica the second runner-up.

Big ups to Clarendon for having one of your own defying the euro status quo beauty standard within these pageantry,gwan with unno bad self...setting it off!

Jamaica you finally showed out with a daughter kissed and loved by the Sun,nice to see an authentic,exotic black empress represented in  miss Universe from us...truly a breath of fresh air!   She won in my eyes,on the merit of showing up with her own natural crown,the Afro made her every bit more elegant to perfection.

Little black girls who possess her skin complexion and hair texture,saw a representation of themselves without feeling left out for once.   Darker skin is beautiful too and good enough,wear yours with pride.  My one wish is for Davina presence to have a positive impact on our darker hue sistars,stop this bleaching epidemic... see your own unique beauty in the skin you were  born in!

Out of many one people...yet  it took Jamaica this long to have a beauty representing what is closer to the majority of the people *look at us side ways*.  Should've been showcasing all our varieties/diverities equally on the international stage way before now... full circle moment  still,we have come a long way  and just like that,the barriers which are upheld by the warped Jamaicans with slaved/colonized minds are being chipped away one day at a time ...inclusivity reign and will make us stronger.    Shed the old mindset,set the minds free.

Comment by rebelflower on December 3, 2017 at 8:23am
South Africa is pretty too but there’s something bout Jamaica

Comment by rebelflower on December 3, 2017 at 8:17am
This is the only picture I’ve seen of Southafrica on social media. Jamaica has took her shine

Comment by lynz on November 28, 2017 at 3:20pm
She’s a QUEEN who owned that stage with her ELEGANCE, natural beauty, skin tone and fro.. they couldn’t handle it. We ALL KNOW she won that, no competition.

Comment by Fang on November 28, 2017 at 1:53pm
Susette Bookal and El-bull, You both speak the gospel truth. Miss Jamaica should have that crown...I say this not because I'm Jamaican. All the contestants where beautiful, but from the final three Miss Jamaica stood out with her natural beauty, stands and her answers to the last two questions. (1) She spoke on a topic that is plaging this USA and the word today and that is Sexual arrastment also (2) she have her own organization that will help deff people all over the world. The other two contestants could not form proper sentences to give a good answer to the two guestions. The hispanic one can't even speak english in a englist country, and event...Will always need a interpretator. I love this country, I lived here since I was a child and it as afforded me to achieve a good life...but I'm a Jamaican first. America always and always will try to keep jamaicans down the ones who strive to reach the top, because we are a spiritual race of people and don't conformed nor accepts some views and lifestyles of this country. So....
....................

There is no such thing as a white African, let alone a white South African---This is racist and a slap in the face to everything African as if they are trying to redefine what an African is and looks like. in the end, they will erase blacks from the continent as the original people of the planer as they love to change history , the meaning of history and words to suit their agenda----WAKE UP AND FACE THE TRUTH PEOPLE, THEY HAVE AND ARE STILL TRYING TO ERADICATE US FROM THE PLANET VIA POPULATION CONTROL, VACCINES AND OTHER METHODS