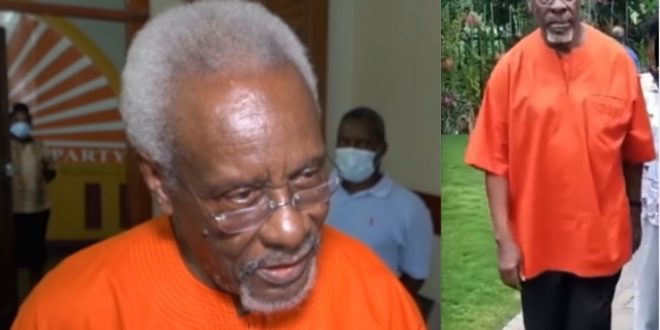 A video has surfaced online with the former Prime Minister of Jamaica and President of the PNP, P.J. Patterson walking without aid almost a year after sustaining a knee injury because of a motor vehicle accident that took place at his St. Andrew home.

Percival Noel James Patterson more commonly called P.J. recently spoke in an interview with a reporter and outlined that he will not be taking any side in the upcoming People’s National Party presidential election where Lisa Rene Hanna is touted to be the favourite.

In the released video we see the former leader walking from a car seemingly up to a doorway, he took short steps and struggled to walk about 50 feet in total before a male said “ok you can stop now” after which the video cuts. However according to reports P.J. is now doing better than he was doing health-wise months ago.

The video did not show Mr. Patterson getting out of the car which leads many to believe that the man who once ruled Jamaica strongly has lost most of his strength nowadays “Once a man twice a child” said one person.