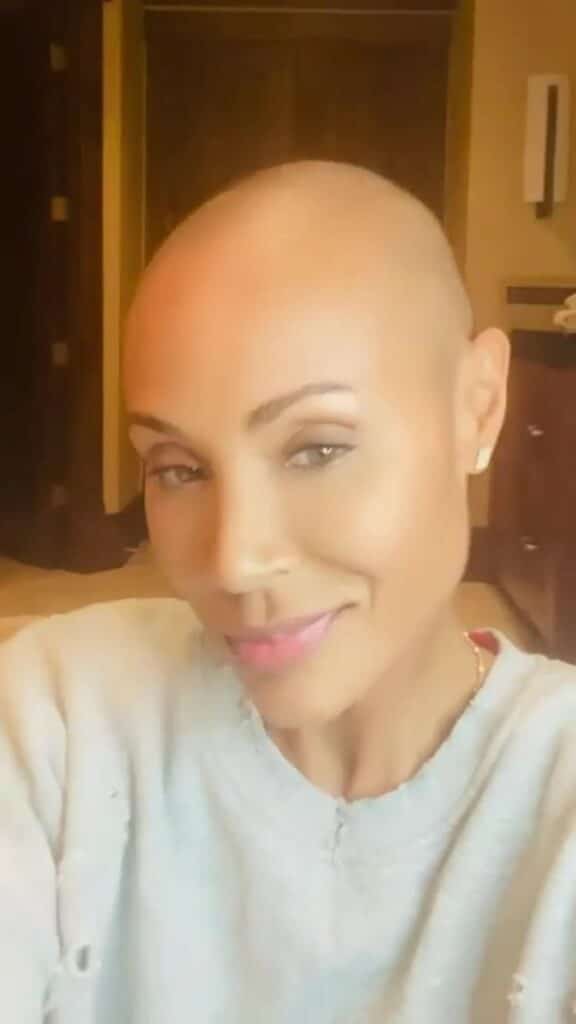 Jada Pinkett Smith shared a video update this week about her hair loss journey and her battle with alopecia.

“Now at this point I can only laugh,” she said in a clip shared on her Instagram page, pointing out line of hair loss on her bald head. Pinkett Smith said the line appeared “just all of a sudden one day.”

“Y’all know I’ve been struggling with alopecia,” she explained, adding, “look at this line right here…it just showed up like that. And this is going to be a little bit more difficult for me to hide, so I thought I’d just share it so y’all not asking any questions.”

Check out the clip below.

Pinkett Smith revealed in 2018 on her Facebook Watch show “Red Table Talk” that she suffers from alopecia.

Over the summer she debuted a buzzcut and is often seen wearing turbans to cover up her hair loss.

She captioned her newly released video update: “Mama’s gonna have to take it down to the scalp so nobody thinks she got brain surgery or something … Me and this alopecia are going to be friends … period!”

When Pinkett Smith first noticed her hair was falling out, she called the moment “terrifying.”

“I was in the shower one day and then just handfuls of hair just in my hands … It was one of those times in my life that I was literally shaking with fear,” she previously said.

Hair does not matter.. its internal thing which matters..

She should apply for a job as a mannequin.

Bald head ass hoe in love with a dead only child ass n****, what a dumb hoe

Comment by mr1stroke on January 1, 2022 at 11:13pm
God bless her, and you still look good, hope your health gets better