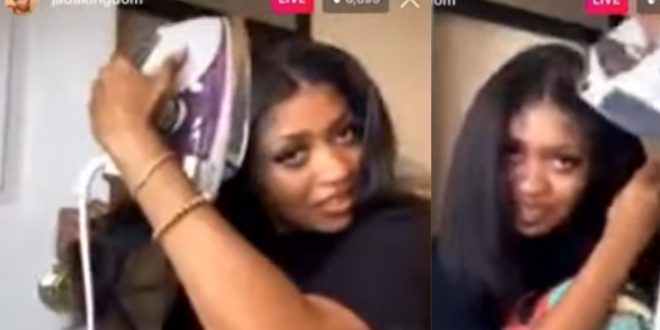 A social media post by female dancehall singer Jada Kingdom has fans wondering if she is indeed a real person.

The entertainer who also goes by the name twinkles was spotted in the video flat ironing her hair when it seemed as if something went wrong with the machine she was using to get the job done.

It would have seemed to the fans that “Muma heavy” was eager to do her hair as she did not let an inoperable flat iron stop her, all she did was to get a real clothes iron to finish up.

In the video, Jada can be seen with the iron running through what looks like a brand new hairpiece until it was all straightened.
She even at one point, almost got burned.

In the end, it did look as if the hair was done using the proper tools.

This act done by twinkles is not uncommon among women in Jamaica who run through similar issues while taking care of their hair.

She is the first however to do such a trivial act on camera and fans are loving it.

Jada who is now 22 years old recently celebrated her birthday in fine style and just cant stop from going viral online on a weekly basis.

Comment by vaughn mitchell on September 21, 2020 at 8:18pm
Damn, watch some woman copy it and burn the hell out of their scalp.