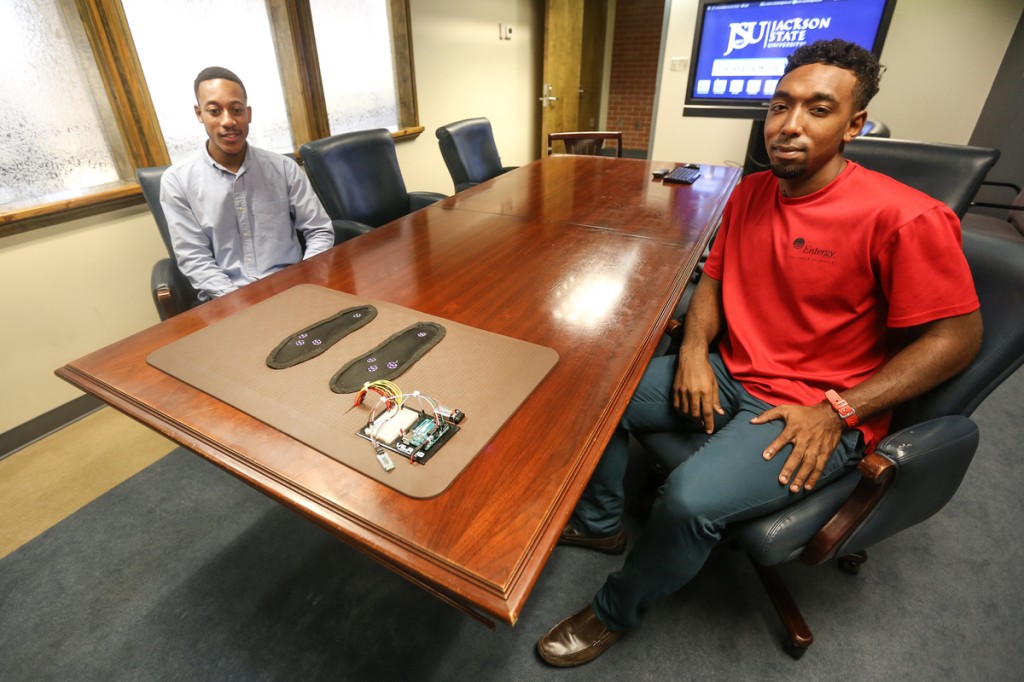 Engineering students at Jackson State University have designed a “smart mat” that gauges foot temperature of diabetics to help thwart the danger of lower extremity amputations – particularly in Mississippi, where the risk is greater, according to the CDC.

The Mississippi Department of Health said the Magnolia state ranked second in the nation for prevalence of diabetes in 2012. Accordingly, four of every 1,000 deaths resulted from complications of the disease.

As part of their senior design project, JSU students in the College of Science, Engineering and Technology recently created the temperature-measuring device.

For one group member, the “smart mat” project is personal.

“As a result, we wanted to help other diabetic patients,” he said. “Upon research, we realized that a lot of them suffer foot ulcers, and we uncovered an issue with temperature. So, we developed a mat that diabetic patients could stand on to register the temperature of their feet. If there’s a four-degree difference between the two over a period of time, the lower one would be at greater risk of ulceration,” he said.

Also, the native of Pascagoula, Miss., said, “A diabetic patient has abnormal (high) glucose levels in the blood, affecting its flow to the lower extremities. This causes the foot to be colder than average. By outputting temperature values, the patient can see which foot is more affected. Then, that information can be relayed to a physician.”

Dr. Gordon Skelton, professor in the Department of Electrical and Computer Engineering and director of the graduate program for CDS&E (Computational Data-Enabled Sciences and Engineering), said this senior project, and others, aimed to find solutions to real problems.

“A lot of the issues related to diabetes end up being problems with neuropathy and a few other things, resulting in the loss of feeling in your feet. You don’t really know there’s an issue until you develop an ulceration, which could possibly lead to worsening conditions that result in amputation. The condition could even accelerate a second amputation that can significantly compromise a person’s ability to move around,” Skelton said.

Dr. Gordon Skelton, professor in JSU’s Department of Electrical and Computer Engineering and director of the graduate program for CDS&E (Computational Data-Enabled Sciences and Engineering), said, “The idea behind the ‘smart mat’ was to realistically see if there was some means of collecting data for a doctor or caregiver as an early warning.”

“The idea behind the smart mat was to realistically see if there was some means of collecting data for a doctor or caregiver as an early warning. Products such as these have real value,” he said.

Developers of the smart mat say they encountered a few problems along the way.

Although the smart mat is quite durable and can be placed on most surfaces, team member Chevan Baker said one issue was that the original temperature sensor pads produced erroneous values due to moisture, such as wet feet. He said the group eventually switched to a more sturdy, efficient, waterproof sensor called the lily pad.

Another issue occurred with formatting an accompanying Android app to display the data that was being collected. Baker, a computer engineering major from Kansas City, Mo., said the team eventually resolved that dilemma, too. The app, which is still being fully developed for access on other mobile devices, stores previous temperatures (Fahrenheit and Celsius) for future comparison.

Butler, Baker and team members are engaged in ongoing discussions about modifications and placing the product on the market. Their other partners are Jordan Barber, a computer engineering native from Jackson, Miss., and Fred Harris, an electrical engineering native from Forest, Miss. The group says the mat cost slightly less than $500 to produce.

Meanwhile, Skelton said the initial prototypes of these types of products validate the concepts of each design; however, refinement and formal adjustments are required for eventual commercialization.

Among other promising products in this year’s slate of senior projects:

Wireless pedometer: This device can be outfitted on running or dress shoes, for example. It measures the number of actual “foot strikes” and produces more accurate counts within a 90th percentile for users rather than current products on the market that calculate motion of any kind.

Smart bag: This product involves placing a device on backpacks or other bags and is especially useful to students who leave behind or misplace items such as laptops or iPads. With RFID (radio frequency identification) circuitry and pressure sensors, users know if an item is missing from a bag based on weight. The device also has Bluetooth technology to alert users leaving a room that an item is missing.

Automated RFID attendance: This device saves time and eliminates the need for professors, for example, to take roll. With a unique RFID tag, the electronic classroom attendance reader can determine each student’s name, when the person entered the room, whether the student left class early or whether the person was legitimately enrolled for a particular course. Also, it alerts the professor about the frequency of attendance.

Of this year’s teams, Skelton said, “This was an excellent group of students who showed great promise for their engineering careers. They will make themselves and Jackson State University proud.”

Standing on the prototype, Baker shows how the feet are positioned for reading by an Android app. (Photo by Charles A. Smith/JSU)

Comment by Eddie elie on January 10, 2016 at 8:34pm
Congratulations to the student for coming up with this new technology. Companies are making billions off treating symptoms & not eliminating the main cause of diabetes. Everbody needs to

check out this link i found. http://diabetesdestroyer.com/special/v1/

Wishing them much success...

Comment by Big Woman on January 8, 2016 at 7:51pm
Kudos to these students, I hope.they market it and help those suffering.

Yeah, any different opinion of Mississippi now. One would expect such technologically progressive stuff like that coming from Massachusetts Institute of Technology (MIT) or a major/advanced academic institution on the East or West coast. Similarly, is the recently reported advancement made by Cuban doctors in the same medical arena.

Former Brooklyner (NY) now residing on the Gulf Coast. No offence meant; just props to "colored people/minorities" as we are lowly referred to.

Comment by Colin on January 8, 2016 at 2:08pm
Congrats to the two young men, I'm so proud of them. Hope they have a strong patent on their work.