When the socialites joining Mayor de Blasio at last night’s gala fundraiser rolled up to Gracie Mansion and descended from their black SUVs, it’s possible that they heard a distant clamor from across East End Avenue, where about 100 residents of public housing, corralled into a cattle pen of police barricades, were staging a protest.

Carrying signs that read “Funding, Not Gentrification,” and “Build it on your lawn,” the residents were there to protest de Blasio’s plan to partially fund the New York City Housing Authority by allowing private developers to build luxury apartments on ostensibly underused portions of public housing property.

The Gracie fundraiser marked the reopening of the Governor’s mansion after renovations. For the protesters, this swanky celebration of “the people’s house” mere blocks from the public housing where the mayor plans to allow developers to build market rate apartments was too good an opportunity to pass up.

Last month, the city revealed further details of its plan to rescue the city’s foundering public housing agency, specifying that the Holmes Houses, a complex with more than 900 residents a few blocks north of Gracie Mansion, would be among the first sites where private developers will be all... to carve out plots for market-rate housing. Residents from the other public housing complex marked for private development, Wykoff Gardens in Brooklyn, also attended the protest.

"I've been living in Wykoff Gardens for 30 years," said Beverly Corbin, 62. "We don't need them to build new houses. We need them to take care of the ones we've already got, that we're living in."

NYCHA could certainly use the money private developers could provide—after years of mismanagement and declining support from Washington and Albany, the housing authority has racked up $17 billion in debt and is expecting to have a $200 million operating deficit by 2020. NYCHA has also yet to receive $3 billion promised from FEMA for damage incurred during Hurricane Sandy.

The plan to infill public housing spaces with private development was first floated by Mayor Bloomberg in 2013. Bloomberg proposed allowing developers to build 80 percent market-rate housing on public land. As a candidate for mayor, de Blasio was vocally opposed to the scheme.

“NYCHA land is not for luxury condos,” he told the Metropolitan Council on Housing that year. But de Blasio made it clear that it was the details of the plan, not its broad outline, that he objected to. “Any future infill plan must include substantial amounts of affordable housing, the hiring of NYCHA residents for construction and permanent jobs, and the resources generated must be used to improve conditions for NYCHA families.” True to his word, when de Blasio unveiled his own plan to raise money for NYCHA this year, his proposal for private infill in public housing included a much higher ratio of affordable housing. The plan calls for some 17,000 new infill units to be built on public housing properties over the next ten years. At the Holmes Towers, the plans call for the elimination of a playground to make way for as many as 400 units, about half of them affordable housing. In the Wykoff Houses, the plan is for roughly 600 units, half of them affordable.

But for some, including City Councilmember Ben Kallos, 50 percent affordable housing is still not enough.

“We shouldn’t be building luxury housing on public land," Kallos said at the protest last night. "Any development on public housing land needs to come with the approval of the existing tenants, and it needs to be 100 percent affordable.”

Javier Sepulveda, a tenant in the Dewitt Clinton Houses and a tenant organizer, said the city’srecent announcement of a funding package for the MTA shows that there are other options. “The Governor and the Mayor just came up with $26 billion for the MTA,” he said. “They didn’t have to give up any property. Why should we? It’s a land-grab.”

"This isn't a matter of money," Sepluveda said of the chronic underfunding of public housing. "I believe it's a matter of desire and will."

City Hall defended the plan in a statement to Gothamist this morning: “The City has made unprecedented investments in NYCHA—over $500 million since Mayor de Blasio took office,” the statement reads. “But NYCHA is in a deep financial crisis with over $17 billion in unmet capital needs across the portfolio. We believe NYCHA residents will be best served through our plan which maximizes affordable housing, while generating revenue to repair aging buildings and make necessary upgrades.”

A handful of protesters briefly made good on their rhetorical threat to build on the Gracie Mansion grounds. Crossing out of the protest-pen set up by police, they erected a mock housing tower made of cardboard just inside the mansion’s gates. “You call this progress,” read words on the side of the cardboard tower. “We call it gentrification.”

As they turned away from Gracie Mansion and started heading back to the Holmes Towers, the protesters passed some late arrivals on their way in to the gala, and asked them to pass a message on to de Blasio: “Tell the mayor the whole projects came to dinner and he ain’t let us in.” 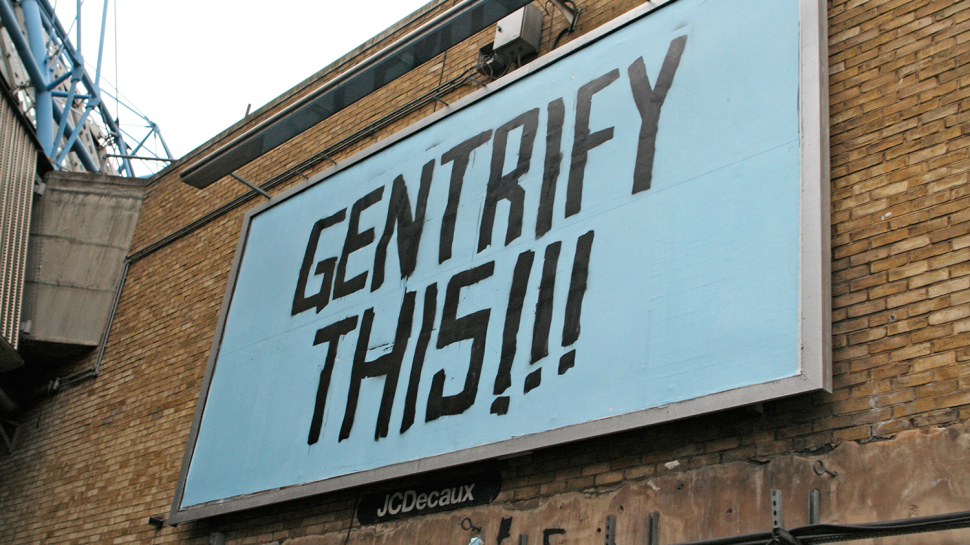