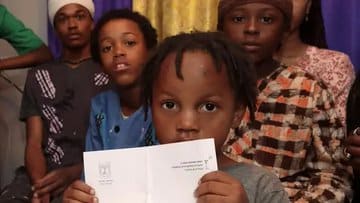 Members of the Hebrew Israelites Community of Dimona in southern Israel have been ordered to leave the country by September 23 or face forcible deportation.

As someone noted on Twitter, “Israel welcomes white American Jewish immigrants but if you’re black it’s often another story (you may as well be Palestinian)”.

Here’s more from The Times of Israel:

In response to appeals asking to be allowed to stay, the Interior Ministry’s Population and Immigration Authority wrote to each family that neither residency in Israel for a long period nor work in the country were sufficient grounds for a change of status.

The letters were received on Thursday, although they were dated August 9. The recipients plan to appeal against the decision to a court in Beersheba. Earlier this year, 17 letters were sent to the families numbering 51 individuals in total, some of whom were born in Israel and some of whose children have served in the IDF.  They were told to leave within 60 days but were given the right of appeal.

Per the report, the families who received deportation notices are Americans who entered Israel as tourists and remained in the country once their temporary stay expired.

Some of the adults “are not eligible for US citizenship or have given it up are stateless and have nowhere to go,” the outlet writes.

The community, some 3,000 strong, is not recognized as Jewish by Israel’s religious authorities.

Ashriel Moore, 30, the son of one of the community’s founders is an Israeli citizen. He is coordinating the campaign to stop the deportations.