Is this how a pro acts !!!Yikes! Brandy Performs to an Empty Stadium 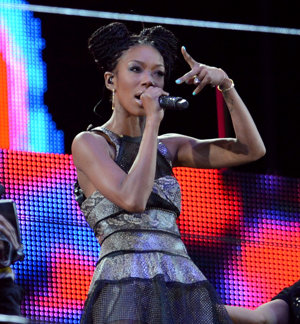 In retrospect, it seems like someone should have said something sooner.

Brandy was secretly slated to be the surprise grand finale at the Nelson Mandela Sports and Culture Day, but since fans had no idea the singer would be the final act at the end of a packed schedule, almost all of them had left the building by the time she stepped on stage. Oops.

To put it in perspective, the FNB stadium in Soweto, South Africa, holds 90,000 guests and had been packed the entire day. When Brandy came out for her big moment, however, only 40 people remained. Oh, and reportedly, the lights were on (which was probably one of the reasons guests thought this shindig was done).

"Brandy performed to an empty stadium. With the stadium lights on," local musician Kabomo tweeted.

Other event-goers shared Kabomo's shock. Twitter user Crazy Girl Tutu (how we love that name), shared, "I gave up the min I saw the empty stadium. Brandy performing for the chairs!"

But Dawn Ngwenya thought Brandy had at least one fan left, tweeting, "Well Brandy is going to perform for herself and Mbaks only. Stadium now empty." Mbacks refers to Fikile Mbacks, South Africa's minister of sport, who likely had advance warning that the star would be showing up.

Faced with an empty stadium awash in light, Brandy didn't stick around long either. "People didn't know there was a concert after the games. No one knew Brandy was around. Maybe a 40 people audience," Kabomo shared on the social media site. "She sulked after two songs and walked off."

To be honest, we can't really blame her. And while we're fairly certain Brandy won't be running back to perform in South Africa again anytime soon, we also have a hunch that next time she does, people will know about it!!!!!!!!!!