IS ANIMAL EQUALITY GETTING TOO OUT OF HAND!?!??!?! Vegetarian Activists Push Message with Semi-Naked Women in Bloody Meat Packaging! [PHOTOS]

An animal rights group has put on a gruesome display in Barcelona to press home its message on World Meat Out Day.

The group's aim was to raise awareness of animal rights and to stop people eating meat.

Animal Equality said: "Covered with artificial blood in large trays six animal right activists were plasticised to protest against animal use for food and called for a vegan lifestyle.

"Dozens of other activists accompanied the protest by holding placards.

"This is a symbolic protest to raise awareness of the suffering and death billions of other animals go through because of human consumption."

Animal rights groups say that vegetarianism and veganism would improve the lives of animals. Scientists have said that lower consumption of meat would have environmental and health benefits.

A report by the UN Environment Programme in February recommended cutting meat consumption by half or giving it up altogether.

They said the horsemeat scandal showed the reality behind meat processing and that farming practices were destroying the planet.

Cancer Research UK warned that processed meats were the cause of three percent of premature deaths.

Yinka Ebo, senior health information office, said: "There's a clear link between eating too much processed meat and bowel cancer, but this study suggests that cutting down on these meats could also reduce the risk of dying prematurely." 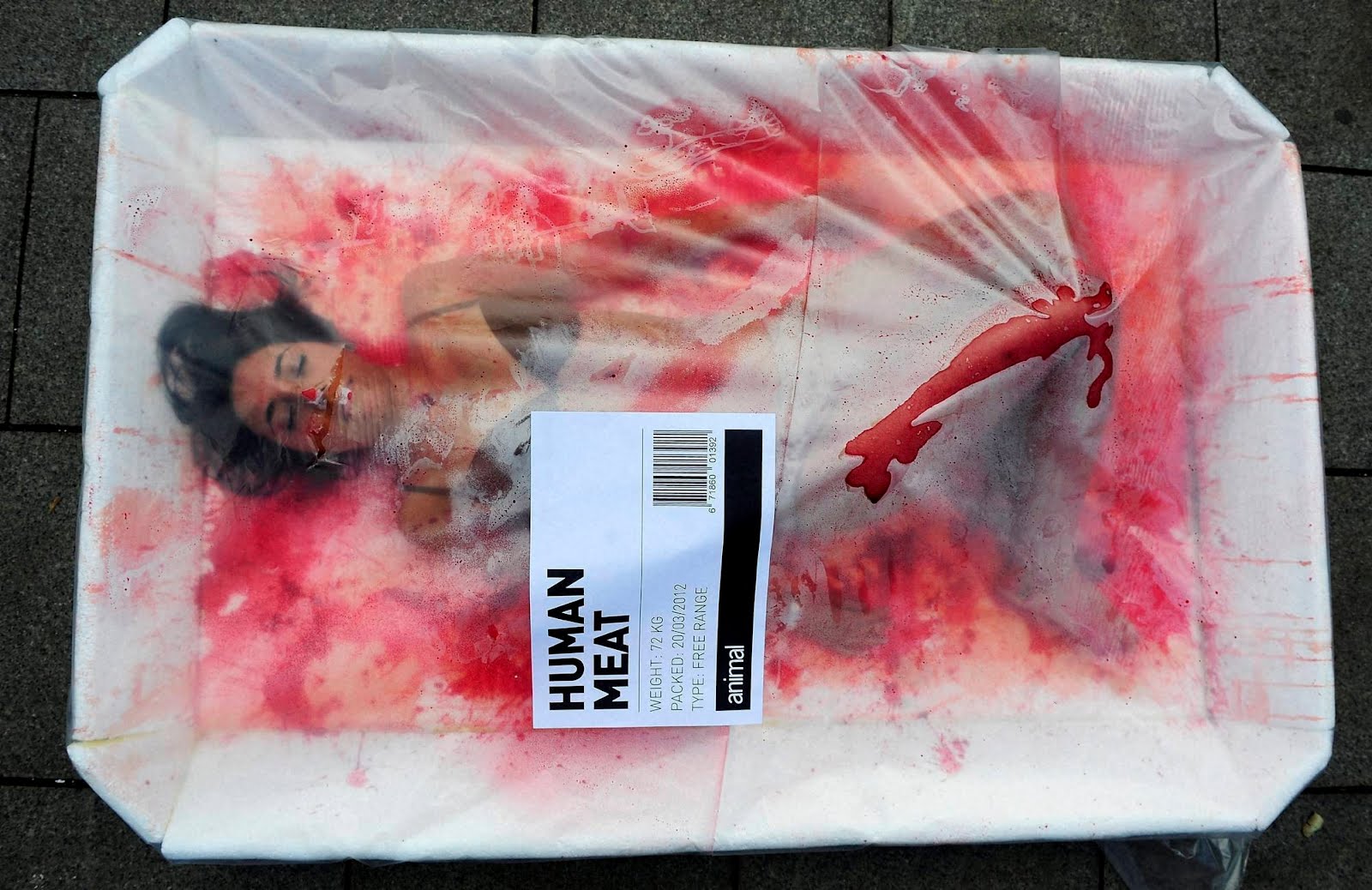 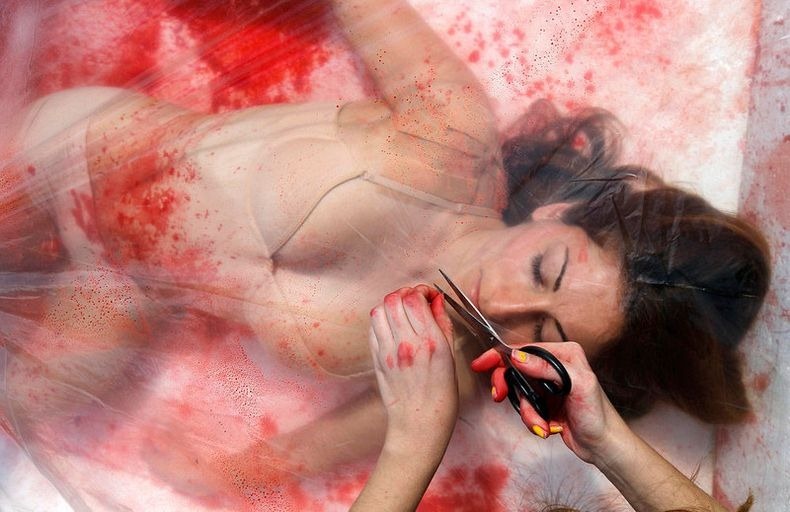 WHAT DO YOU THINK? SHOULD WE HAVE OUR OWN CHOICE ON WHAT TO EAT? OR LET THESE PEOPLE DICTATE OUR LIFE!?!?

You have not heard about this:

A new study found that meat-eating cavemen died earlier than cavemen who were vegetarian. Not from starvation. They were just murdered after they kept talking about why they ate meat.

Comment by Fedora McClaren on October 21, 2013 at 10:40pm
As a person who has been a vegan (and continually do not eat flesh), I would say the Concept is extreme.

It isn't necessary to consume flesh as many humans do, for luxury. Luxurious eating is what breeds certain cancers, not eating meat. If one lives in colder climate, it is necessary to eat meat, such as beef in order to sustain protein and proper fats in order to survive. In warmer climates, if needed, poultry and fish is more sustainable.

I personally do not support the meat industry because I have seen how the companies treat the "product" prior to slaughtering. There is fear instilled within these guys before they are murdered. Many of us ingest this fear when we eat.

It is best, if one eats meat, to eat anything which was done in the process of halal, where the animal has no time to be scared.

One more thing, humans tend to forget they are mammals too...they have hair and do not lay eggs. Humans are a form of animal which was developed in a "more advanced" fashion.

I, too, thought about the lives of vegetables. They are living as well. In this case, the only food anyone will be able to consume are foods which are ripened and fall from it's root, or tree... Therefore, there will be no fuss about separation from the root...

we all should one day stop eating meat and see how good your body will feel trust me.

Just give it time...someone will champion the rights of vegetables, trees and fruits. Soon they will start saying stuff like, "STOP MURDERING THE INNOCENT CARROTS AND GREEN PEAS", ....then I guess we will all have to drink water until we fade away...lol

What are a these people smoking !!!! I can't there is a thing called the food chain !!! Eat what you want !!! But if we na eat the animal we could do more harm to the Eco system then good!!! Some people are extreme with there's I think they lost it!!! I have gone vegan and some times go a week or two with out meat to kill for survival is one thing to kill for excess I can agree is a waste like game hunting and not eating what you shoot!!! But this is stupid!!!

What dem a go do wrap themselves in condems for people who eat p**** !!! It na meat jus de same doe!!! LMAO

Listen, why don't these people spend their energy fighting for slaughtered babies from abortions? It seems like animals have more rights than humans...I tell you what, so long I give thanks for my stewed chicken and rice and peas...it's going down the hatch.

I think some group should get up and do the same for vegetables and the vegetation cause they suffer and die too at the hands of man there are a lot of people who believe that trees do hurt and bleed as we do and then we should watch how we walk cause we may crush some insect an ant maybe and then we will be in the perfect world with no food to eat and no death no obesity problems etc etc lets be realistic this is a sinful world solving one problem sooner or later create a next temperance is the key word here.