IOC 'fully satisfied' over Russia's anti-gay law- I must Break You !!!! HAAAAAAA!!!!!!!Dem na go have Olympics!!!HAAAAAAAAAA 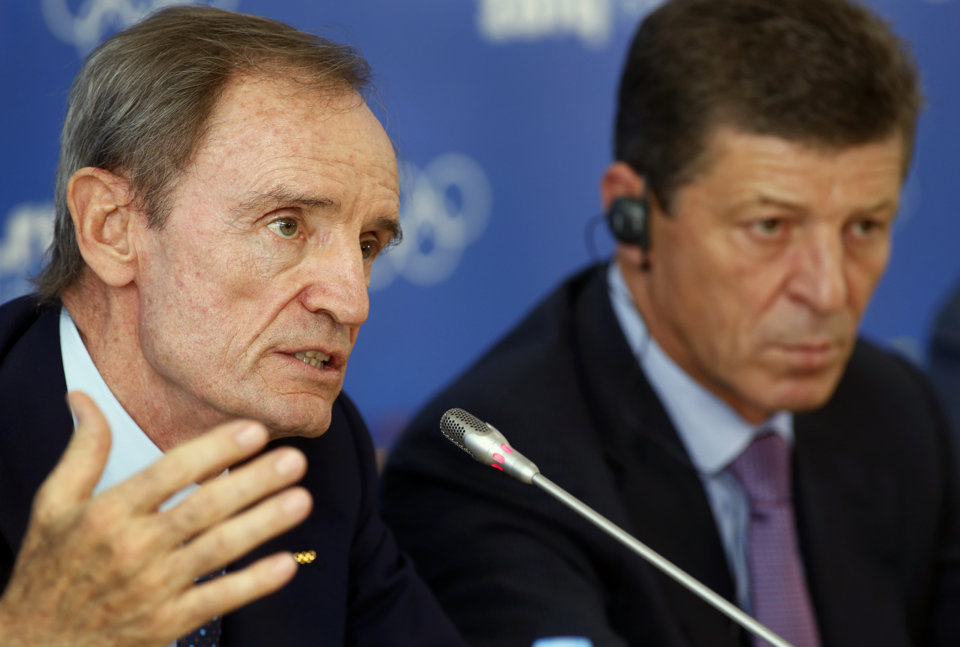 Jean-Claude Killy, chairman of the IOC Coordination Commission, gave his stamp of approval during a news conference Thursday at the conclusion of the commission's 10th and final visit to Sochi before the games, which begin on Feb. 7.

Russia has come under scrutiny as the next host of the Olympics because of the law passed this summer outlawing "propaganda of nontraditional sexual relations among minors," which many worry may apply to gay athletes and visitors to the games.

Killy said the commission deliberated for several days and concluded "the IOC doesn't have the right to discuss the laws that are in place in the country hosting the games, so unless the charter is violated we are fully satisfied."

Russian officials insist the law is designed to protect children and doesn't infringe on the rights of gays.

"Regarding this law, if people of traditional sexual orientation spread propaganda of non-traditional sex to children, then they will also be held accountable," said Dmitry Kozak, a deputy prime minister in charge of overseeing preparations for the Sochi Olympics. "So there is simply no need to talk about discrimination."

President Vladimir Putin signed the ban on propaganda into law in late June. In August, he signed an additional decree banning all demonstrations and rallies in Sochi for two and a half months around the time of the games, a measure seen as intended to thwart protests by gay rights activists.

Killy said the IOC commission was pleased with the ongoing construction ahead of the games, which with a total cost of $51 billion will be the most expensive Olympics in history.

Much of the city still looks like an enormous building site, with unfinished hotels and debris from construction scattered across the Black Sea coast, but the Olympic venues are impressive.

The coastal venues, where the skating events will take place, are sprawled like beached metallic whales across what used to be a residential coastline. The structures themselves are both sleekly elegant and intimate, providing for a close proximity between athletes and spectators.

The mountain venues, about an hour by car or train from the coast, are similarly spectacular. A network of gondolas, like pulsing veins up the mountainside, whisk visitors up to 2,320 meters (7,650 feet), while the smooth wood of the bobsleigh track zigzags across the lush forest. A blizzard on Wednesday coated the mountain peaks in snow, helping to ease worries of a repeat of last year's warm winter.

The IOC visit coincided with major storms, unusual for Sochi in September. Down the mountain, heavy rain caused flooding and mudslides, leading authorities to introduce a state of emergency.

Killy said that despite the rainfall there had been "no damage anywhere whatsoever" and he was confident that any weather problems "would not stop the games."

He recalled the IOC commission's first visit in September 2011 and the "unprecedented challenge" Russia faced to put in the necessary infrastructure and build most of the venues from scratch.

"In Europe you would probably spend 15 years on that, and here they did it in seven," Killy said. Russia was awarded the 2014 Olympics in 2007.

Kozak asserted that only $7 billion had been spent on the venues themselves, whereas the remaining sum went toward "developing the city and the region" along the Black Sea.

I don't believe this law should come under scrutiny :

Russia has come under scrutiny as the next host of the Olympics because of the law passed this summer outlawing "propaganda of nontraditional sexual relations among minors," which many worry may apply to gay athletes and visitors to the games.

Comment by Joey Pagan on September 29, 2013 at 2:28pm
Nice bait but epic fail LMBO, homosexuality is seen across more then 2,500 species on Earth. Scream, fight, call names, use profundity all you want. Where at place in history that like 50 years ago when folks weren't allow to have the same rights as white folks, Now we know they were and are racists. Gay Rights are the new civil rights! When you can come up with any factual studies that show its a choice and not a genetic component then will I even take you seriously... Till then you Jessica are just looking for drama on this Sunday afternoon probably had an ex who came out and there is you're frustration. Don't hate because it never looks good on anyone. See I don't need to engage in profanity as It is a sign of ignorance and since ignorance is bliss and you have no Valid Argument... I'll end this here and wait till you become educated. Equality Will Prevail, Everyone Is Equal. Peace & Love.

Comment by Jessica Torres on September 29, 2013 at 2:07pm
Lmao @ Joey I can't help you like the same thing I do! Dick... Educate yourself h***'s not allowed, and I end this discussion because I don't deal with you gay sick minded ppl! Get help! Who said that men are suppose to f*** each other or bone humping is healthy! That's why aids was created to help kill off you boty boy! See me in Jamaica and watch nuff stone ah throw pon you!
Momma mon not allowed fi mi island Joey!!

Comment by Joey Pagan on September 29, 2013 at 12:29pm
You're argument is null and void, As a divinity grad stud (student in case some clarification was needed) serious theologians have seriously questioned the translations about references to gay loving relationships. Educate yourself and free yourself from you're racist undertones as I have nothing against anyone. Breathe it's only a discussion LMBO. Some people will do anything for drama and discourse. Still stand behind (no pun intended lol) all the discussion I have posted here. God Bless, Equal Rights For All.

Comment by Jessica Torres on September 29, 2013 at 12:07pm
Gays can never be equal it's sick and you need counseling Joey! I'm quite sure two dudes humping is the reason on how you ended up in this thread...

Comment by Jessica Torres on September 29, 2013 at 12:06pm
A man having a penis up his rear end or in his mouth is not ignorance fool! It's a shameless act! And all you mama mon should be stoned! Take that to the bank and cash it stupid! Before you talk abt ignorance!

Comment by Joey Pagan on September 29, 2013 at 11:22am
Proof! Ignorance breeds ignorance. SMDH. It is amazing that races/people who were being sold and traded like scraps of food just 100yrs ago would try to oppress or feel the need to try to do so to others. " Those that don't learn from the past are condemned to repeat", let us move forward without the need to step on other people's rights and freedoms. We are all equal!! Equity will win as evolution has over time. Final entry here as ignorance is bliss and abundant here. Love & Peace For All.

Comment by Joey Pagan on September 27, 2013 at 10:06pm
I will not engage in ignorance, homosexuality is seen across 2500 species. Only one is homophobic. Equal Rights For All. Peace..

It's so funny over these past many years how blk ppl put all of their hearts into fighting for gay rights yet and still wont budge bit to fight for blk ppl's human rights...smdh!!! we are the only race of ppl who refuse to support their own. How many African-American towns are there appose to littlw Italy, little China and so on? NONE! but do we care, hell no! that's why we're being murdered by us and them and they don't care because who's going to care about somebody that doesn't care for themselves. Yet lets stand for the gays...! If Russia doesn't want it then so be it, that's their s***, then YOU'RE present has the nerve to confront that but refuses to confront the problems right here in his own damn country. two men can't make a child  nor could two women, nature makes no mistakes, I've never seen two male birds, cats, dogs or frogs try to reproduce, it's a sickness which leaks the fall of nations and smart ppl know this