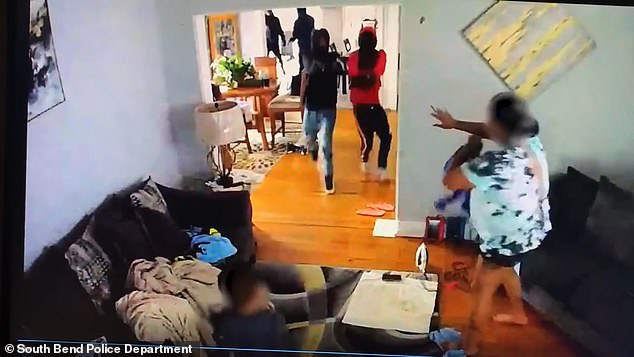 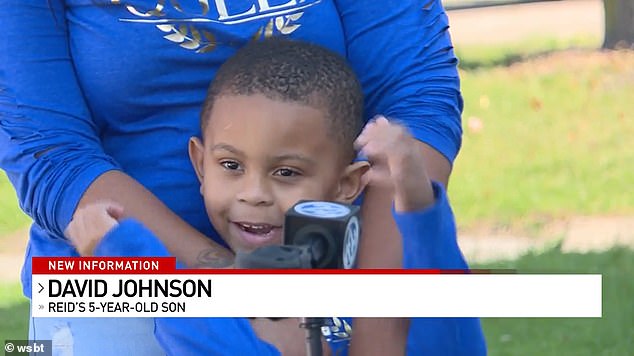 A five-year-old boy was caught on camera valiantly protecting his mom when gunshots when off and several armed men broke into their home.

Dramatic surveillance video of the home invasion, which happened September 30 at 10.30am, shows the moment when four men - at least three of them with guns - burst through the door of Tamika Reid's home in South Bend, Indiana.

Police told WNDU that the gunmen had knocked on the door and that a child inside the home answered the door.

In the video, Tamika can be seen in the middle of ironing clothes while her five-year-old son, David Johnson, plays nearby. The door is then thrown open and the men barge inside her home.

Four gunmen are seen entering the home of Tamika Reid (right), while she was there with her kids during a morning home invasion on September 30 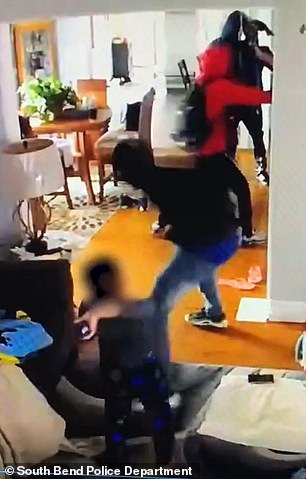 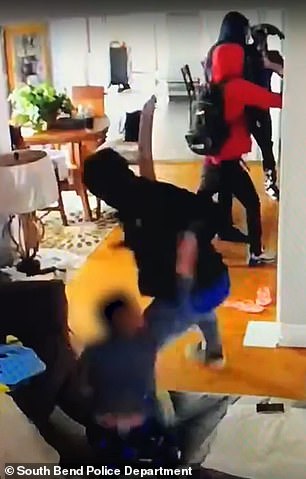 As the gunmen forced Tamika into another room, her five-year-old son, David (front center), can be seen throwing toys at one of the gunmen

Tamika stands up to investigate the noise when the men, wearing hooded sweatshirts, run over to her with their guns drawn, forcing her to fall back onto a sofa.

She holds her hands out to the gunmen and stands, walking out of sight as the gunmen follow her. In the background, another person has their hands up and is being forced by a gunman to head in the same direction as Tamika.

That's when little David swings into action, picking up toys and throwing them at the nearest gunman and trying to tackle him.

At one point, the boy appears to grab the gunman's arm and try to drag him away from where his mother is being held off screen.

Fortunately for the boy, the gunman brushes off the attacks instead of taking aim at him. 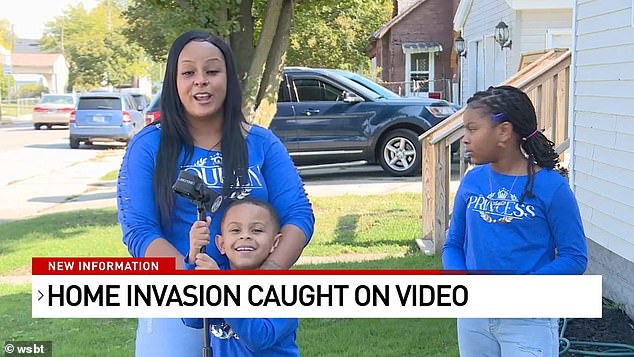 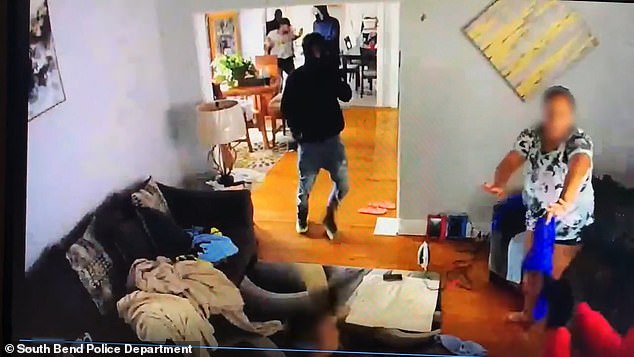 Tamika (right) is seen with her hands up, facing the direction where a gunman and David stand. In the background, another person (in a light shirt) is being held at gunpoint near the door 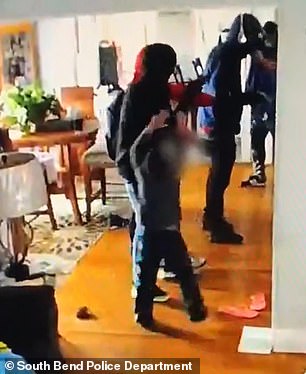 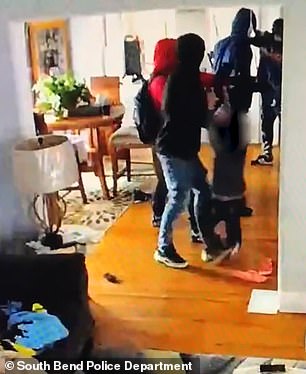 If there had been audio on the video, she said, 'You would hear me saying, "what is that!"' as gun shots ring out and the men entered her home.

Tamika said that she was scared because her children where with her when the home invasion took place.

She called David her 'hero,' noting that 'he was trying to hit the guys.'

'My thing was I need to get him out of the house before they do something to my son,' Tamika said.

David told the news station that was trying to protect his mom - 'I hit him and I tried to throw my car at him,' the five year old said.

The gunmen left without taking anything or hurting anybody in the home.

Police have now made the video public in hopes of drawing out tips from the public.

'As this little boy is defending his family, and his home, we’re asking that the community now defend him,' South Bend Police Media Liaison Christine Karsten told WNDU.

Karsten also told WSBT that 'no little boy, nobody in general should have to go through something like this so it’s really important we get those who are responsible for this heinous crime off the streets.'

The gunmen in the video have the hoods of their sweatshirts tied tightly around their faces and several are wearing masks which conceal their faces.

Detectives are still investigating the incident, but don't have any suspects yet.

It's unclear what was the motive behind the home invasion.

Anyone with information about this home invasion is asked to call the South Bend Police Investigative Bureau at 574-235-9263 or leave an anonymous tip at Michiana Crime Stoppers at 574-288-STOP or 1-800-342-STOP.

Be nice if they did a home invasion and they got met with someone who had shotgun and blew them away, then dump them in the trash.

I will say it and it is up to Caribbeanfever if they want to publish it.  These young punks, who probably joined marches against police brutality, are condidates for chemical castration when they are caught.

Comment by vaughn mitchell on October 13, 2020 at 6:07pm
Those gunmen, look young, look at their clothes, their height and built. Someone will rat on them.