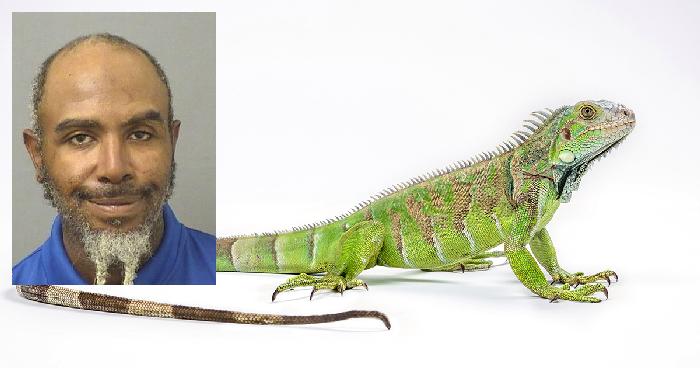 PJ Nilaja Patterson, a 43-year-old Florida man who beat an iguana to death, now faces 5 years in prison after a judge rejected his defense of the state’s “Stand Your Ground” law — a rule adopted 16 years ago that allows a person who is under attack and reasonably fears death or great bodily harm to use deadly force, even if they could retreat to safety. However, in Patterson’s case the recipient of deadly force was an animal.

It’s reported that on September 2, 2020, Patterson was arrested in Lake Worth after allegedly beating, dragging and kicking a 3-foot iguana and killing it. In his felony animal cruelty case, Patterson claimed self-defense, citing that he feared for his life when the animal attacked him. It should be noted that under state law, people are allowed to kill iguanas, an invasive species, in a quick and humane manner.

However, Palm Beach County Circuit Judge Jeffrey Gillen rejected Patterson’s “Stand Your Ground” claim after prosecutors stated he savagely beat, tormented, tortured, and killed” the 3-foot iguana in a half-hour attack caught on surveillance video. They say the iguana never “posed any real threat” and that Patterson “was not justified in his actions when he kicked this defenseless animal at least 17 times causing its death.” Now, Patterson faces up to 5 years in prison if convicted.

Comment by vaughn mitchell on June 8, 2021 at 2:54pm
5 years for killing a damn lizard, and Kamala Harris said America is not racist. I knew it was a black man, if that man was white he get off with a fine. He does not do 5 years they will give tone served but attached a felony record to his file.