‘I Saved Countless Lives’: Police Officer Who Shot Ashli Babbitt is Out of Hiding and Defending His Actions (Watch) 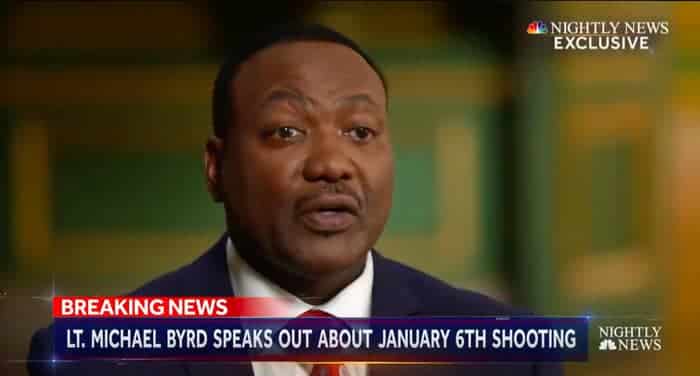 The veteran U.S. Capitol police officer who fatally shot Ashli Babbitt as she and hundreds of other MAGA rioters tried to force their way into the lobby of the House of Representatives chamber defended his actions Thursday in an interview with NBC Nightly News

“I tried to wait as long as I could,” Lt. Michael Byrd told host Lester Holt. “I hoped and prayed no one tried to enter through those doors. But their failure to comply required me to take the appropriate action to save the lives of members of Congress and myself and my fellow officers.”

On Jan. 6, Byrd and several other officers used furniture to barricade a set of doors leading to the lobby where about 60 to 80 House members and staffers were sitting ducks.

“Once we barricaded the doors, we were essentially trapped where we were,” Byrd said. “There was no way to retreat. No other way to get out. … If they get through that door, they’re into the House chamber and upon the members of Congress.”

Byrd said he warned rioters several times to get back as they pushed against the doors leading to the chamber. When glass on the doors was broken, Babbitt, 35, who was unarmed, started to climb through. Byrd fired one shot, hitting Babbitt in the shoulder. She later died of her wound, one of five deaths connected to the riot

“I tried to wait as long as I could,” Byrd told Holt. “I hoped and prayed no one tried to enter through those doors. But their failure to comply required me to take the appropriate action to save the lives of members of Congress and myself and my fellow officers.”

Byrd is a 28-year veteran of the Capitol police force. He was exonerated earlier this week for shooting Babbitt in a review of the incident.

His identity had been kept secret until his interview with NBC News. The New York Times reports Byrd and his family have received numerous death threats as some Republicans and Trump have tried to portray Babbitt as a martyr.

“I know that day I saved countless lives,” Byrd said. “I know members of Congress, as well as my fellow officers and staff, were in jeopardy and in serious danger. And that’s my job.”