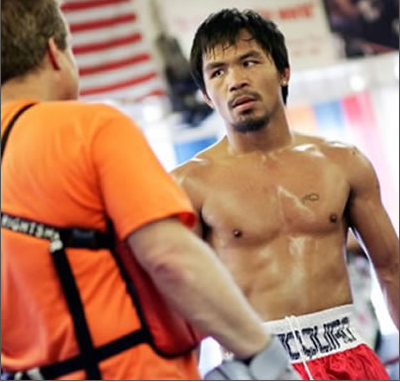 One of Filipino boxing superstar Manny Pacquiao’s former sparring partners has admitted that he regularly injected the fighter with steroids ”in the locker room, in the upper outer quarter of his butt cheek!”

The man, a Filipino and former pro fighter, now fears the wrath of millions of his fellow countrymen, and as a result, his identity is protected. He claims to have worked with Pacquiao from ”his early years” up until Pacquiao’s 2010 fight with Miguel Cotto, and claims Pacman only began using steroids in anticipation of his 2009 fight with Oscar De La Hoya.

He also claims that Pacquiao has switched from using steroids, to now using a complex mixture of HGH (human growth hormone) and insulin, a combination that is virtually undetectable in post fight drug tests.

In an interview given in a top secret location in Las Vegas, the former Pacquiao associate said ”Manny was curious about using steroids for many years before he actually started. There is a lot of steroid use in the Philippines, and they are easy to get. But Manny hates needles! He hates ‘em.”

”Manny was already on the way to becoming one of boxing’s greats when he got the call from De La Hoya and his people about a fight. Oscar wanted a rematch with Mayweather, buy Mayweather decided to retire. Someone came up with the idea for De La Hoya and Manny as a potential big fight. When I heard about it, I thought it was the dumbest thing I had ever heard.”

By the time De La Hoya came calling, Manny Pacquiao was already a twelve year veteran with a 47-3-2 record, and world titles at flyweight, super bantamweight, super featherweight and lightweight. He had been knocked cold twice as a flyweight in the 90′s, and also lost on points to Erik Morales in a bout at super featherweight in 2005, Pacquiao’s last defeat. Pacman had come out on top in grueling rivalries with Morales, Marco Antonio Barrera and Juan Manual Marquez.

In March 2008 he defeated Marquez for the WBC super featherweight title via a split decision, and three months later he battered David Diaz to defeat in nine rounds for the WBC lightweight title. From world flyweight champion to world title holder at lightweight in nine years is both an incredible and unequaled achievement, and also feasible and believable, considering Pacquiao’s speed, southpaw boxing ability and punching power. His sudden leap in 2008 to welterweight, and subsequently beyond, and his complete mastery of much bigger fighters, had opened the door to debate as to whether the Filipino may be using performance enhancing drugs.

”Manny knew there was no way he could beat Oscar. But there was also no way he was gonna pass up the biggest fight, the biggest opportunity of his life. This was it, the big time.” said his former sparring partner.

”Manny never looked at using drugs as cheating. It was just a way of evening things up a little. Oscar was naturally much bigger and stronger than Manny. Of course, on the night we were all shocked. He beat the living crap out of De La Hoya.”

Just seven months earlier De La Hoya had cruised to a win over contender Steve Forbes, Prior to that, in May 2007, he had come closer that anyone before to beating Floyd Mayweather Jr. Although 35, De La Hoya was a massive favorite to defeat Pacquiao. Instead his corner pulled him out after suffering a one sided pummeling for eight rounds.

”After the fight, everyone was going crazy for Manny. We who were in the know about the steroids were just looking at each other holding our breath and hoping no one would start wondering how that could have happened.”

The sparring partner says he began regularly injecting Pacquiao with steroids in preparation for his subsequent fights with Ricky Hatton and Miguel Cotto.

”Once a week, right in the locker room of the Wild Card (Gym). Manny would drop his shorts and clench his teeth, and I would give him a jab in the upper outer quarter of his butt cheek. He hated every shot.”

The contact also said that Pacquiao’s drugs were changed from regular steroids to a far less detectable combination of HGH and insulin after Floyd Mayweather began pointing the finger and making suggestions that Pacquiao’s almost super human ring achievements may not be all down to natural ability.

”They got spooked when Floyd rumbled ‘em.” said the contact. ”That whole thing with the pre fight blood test during the negotiations for a Pacquiao v Mayweather fight last year was because Manny and his team knew they needed one month prior to the fight to guarantee 100% that they would be clean in all tests.”

The sparring partner fell out with the Pacquiao camp after the Cotto fight, but he bares his former boss no ill will, and wishes him success v Shane Mosley in Las Vegas on Saturday night. ”I hope he kicks Mosley’s butt on Saturday, and I know he will. Mosley used to be a big time juicer, as everyone knows. Maybe he’s back on it for this fight. He sure needs to be!”

Pacquiao talks about Blood test two days before the fight...  Click on the links or copy and paste those "http:"s to your address bar... (none are very long)

3. "FLOYD MAYWEATHER JR THE GREATEST DUCKER OF ALL TIME"
http://www.youtube.com/watch?v=A5DmVYj6XxY&feature=related

And there plenty more out there, not just YouTube either. Also the boxing blogs, speaking on the negotiations and how Gayweathers camp kept changing the deals.

I just have to make sure the facts that are out there be told. Fraud KFC Gayweather is a coward, PERIOD... As I said a while back the whole accusation with out any proof was nothing more then a ploy, a tactic. Fraud's pappy made that crap up because he didnt want him to fight Pac. Years ago he wouldnt let him fight Pac(when he was Jr's trainer) because Pac was a fast/quick south paw, he said this, he also said them southpaws were tricky, meaning he knew Jr wasnt ready. Now this non-sense. That testing crap is old news, hes been said, and he had agreed with everything that Fraud wanted (ring size, glove size, testing and a slew of other a****** demands) after pressure from Freddy Roach and Aram. Pac just didnt want any needles in his arm that close to having to preform, simple, they (KFC's camp) knows this because of an interview Pacman had previously I believe in 95, (its on youtube.com) he spoke on how he feels he lost a fight because of them drawing blood so close to the bout he vowed never to do it again. But because of the foolishness with KFC he went back on a promise to himself just to hear that punk still dont wanna fight, "he's retiring". It went from 1mth, to 21 days, to 10 days, to 5 (all the while he was subjected to tests at anytime blood/urine & ONE IMMEDIATELY AFTER THE BOUT), now come on, isnt that the most important.... The only one holding up everything is Gayweather!!! He dont respect the greats, the fans or the sport it self (this is out of his mouth and his actions, what more needs to be said?), this alone should shine a light on the type of individual we are dealing with for those that are in denil, it really says it all...Fraud is a chump, hes only waiting for Pac to get beat down real bad or get old. KFC's a hustler, when I get a chance I'll post some of my sources...

Comment by Incognito on May 13, 2011 at 3:04pm
This is all B/S... Boxing is a dirty sport anyway, from the Trainers all the way up to the promoters, who are more scum than anyone else.  The funny thing is, the majority of the time the boxers are the innocent victims, since they're so "punch drunk" after years to blows to the cranium they don't know half the time what's going on around them...

Comment by Threefoot on May 13, 2011 at 2:30pm
So why doesn't Pacman take the test? Thats all there is to do, take the test and lets see if Floyd is really scared of him. Why are we as humans so quick to judge what a man is or not? Why do we continue to fall short of reality about our own short comings and focus on ignorance just for the sake of a conversation.

Comment by mr fix on May 13, 2011 at 2:28pm
@ BIG SHOT THANKS FOR THE INFO ON THE XYLOCAINE NUMBING AGENT CAUSE TODAY I'LL BE ARGUING WITHE ABOUT TWENTY GAY WEATHER FANS LOL BUT YOU'RE RIGHT BRO.

Comment by kcrunchone on May 13, 2011 at 6:56am
Dont know about mayweather putting anyone up to this, but as far as the drugs being used I say if you are not dirty take the test. I am not a mayweather fan but I would like to see the fight. I am a fan of boxing and to be honest if no one has anything to hide then lay your cards on the table set the purse and get it on. they both are dancing around a lot of s*** so the fax remains that all is left to do is 1 stop running(FM) 2 Stop the drugs (MP)  3 Both men take the tests set the purse and date ! ! !

I agree with u 100%, I was thinking that also. Fraud "gayweather" is a coward and has proven that over and over. He runs from the real fights (going into these retirement phases with such convenient timing), waiting for a fighter to grow old or get beat up real bad. Everyone he fights has to always come to his weight, then have to deal with all his ridiculous rules while taking a smaller purse, win or lose. Hes a hustler not a champ... I know hes the one behind this, and the timing is very interesting (LOL). Ya know, he really has a lot of nerve being that its been proven that he uses xylocaine (a numbing agent / injections in his fists before his fights / THIS IS STRAIGHT CHEATING!) and this is why he will only fight in Nevada. (Its the only state that this drug is legal to use. [Look it up]. His Uncle use to use it and now he does... I cant hear him poppin any sh*t about drugs and I know hes behind this. He father was the one that started the 1st rumor about Pac, there was no accusations of this before Fraud's pops...

Comment by Threefoot on May 12, 2011 at 9:46pm
well Mayweather asked for a test and he said no and Manny will only fight Floyd in Dallas.