“I Have A Thing For Black Girls”: The Fine Line Between Being Adored And Racially Festishized 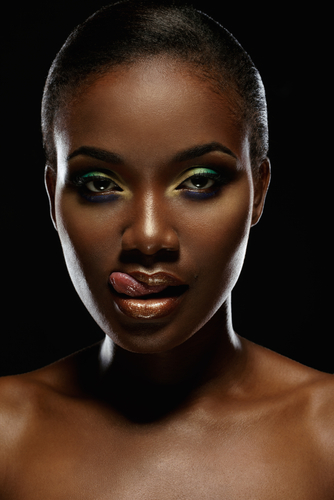 I gleefully ran my hands up his bare chest; his washboard abs made it easy to forgive his Justin Beiber- hairstyle. He traced his lips up the side of my neck, gently tugged on my earlobe with his teeth and whispered into my ear, “I love your skin.” Supreeth wasn’t the first one to tell me this; previous suitors had told me numerous times that my skin feels like butter– a true testament to my moisturizing regimen. At least this is what I thought Supreeth meant by his comment until he clarified with another throaty whisper, “I just love Black women.” Oh boy, was I canoodling with a guy with a racial fetish?! This was my first real-life confrontation with a comment of this sort and I wasn’t quite prepared for the contradictory feelings that ensued: I simultaneously felt repulsed and flattered by him.

Racial fetishism is hardly a new concept. It’s well documented that Black women suffered horrendous sexual crimes at the hands of colonial and slave masters as Black women were often merely regarded, by their oppressors, as objects of sexual gratification. The hypersexualized images of Black women which have persisted throughout history and into present day media have continued to feed into this monster. Take for instance “Hottentot Venus”, a South-African woman who was exhibited in live shows in 19th-century Europe for viewers to gawk at her large posterior; in the 1980s, Jean Paul Goude’s art book titled Jungle Fever featuring photographs of the Black female form – equally riveting and offensive in their allure; and let’s not forget our present day video vixens. This imagery perpetuates the stereotype of Black women being kinky creatures guaranteed to give you the sexual ride of your life. The part of me that wanted to recoil from Supreeth and slap him across the face understands this thoroughly.

On The Other Hand

But quite paradoxically, the part of me that succumbed to Supreeth’s touch knows the struggle that Black women have faced (and continue to face) with mainstream culture’s lack of acceptance of our natural beauty. We’re constantly assaulted by subliminal messaging telling us that lighter skin is better and straighter hair is best. So I can’t help but somewhat agree with writer Zara Chiron who says, “But with the fetishization of Black women, our Afro beauty is being perceived as something desirable which bizarrely gives rise to a positive point for us. We can be sex symbols; we too can be sought after as physically attractive and sexually appealing – in a world full of Barbie, majority white (Disney) princesses and movie heroines and protagonists. We are, finally, being portrayed – however questionably, in a way that says we are not completely repulsive as women.”

As Supreeth and I were kissing, I was straddling the proverbial fence: on one side I felt offended, on the other I felt lauded. All the while in the middle feeling a degree of sympathy because if I truthfully examine my own preferences, I have to admit that I am partial to brown skin tones. Curiously, I don’t view myself as having a fetish – just a preference – so who am I to point fingers and call Supreeth a fetishist? I came across an article an article by Latoya Peterson who made an interesting observation, “… sometimes certain characteristics (which may or may not be common to a certain race or ethnicity) can be highly coveted by individuals. Darker skin is not common to all races. Neither is long, straight, jet black hair or blue eyes. So, it would stand to reason that people who find certain characteristics attractive would start seeking out individuals with those characteristics – which may lead to dating along racial lines. Hmmm…preference or fetish?”

“Why do you love Black women?” I asked Supreeth. “Oh, you know… they’re more fun,” he responded. He delicately caressed my back for a short moment before he added, “I have lots of Black friends, you know.” Stunned silence. I could not believe that he actually said that with a straight face. In just two sentences, Supreeth denied me of my individuality and boxed me into a general “Fun” category based on my skin color. I went from straddling the fence to being undeniably offended.

My experience with Supreeth was not the last of its kind. Subsequently there was Hiroki who told me that, “[He had] a thing for [my] skin color,” and Jeff who said that he preferred Black women because “they taste better.” Despite my experience with these men, I sometimes still struggle with this internal push-pull of feeling of being adored yet objectified. Can you relate?