I GUESS EVER SINCE CHRIS BROWN BEAT UP RIHANNA SHE'S TAKING OUT HER ANGER ON ANY FAN WHO TRIES TO TOUCH HER! [VIDEO!] 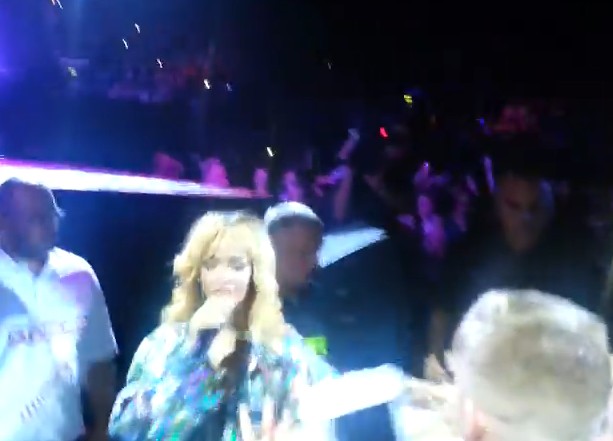 Rihanna knocked some sense into an overeager fan during her concert at Birmingham’s LG Arena Monday night.

As the 25-year-old walked through a screaming crowd with her security guards, one fan grabbed the the Bajan singer’s arm and would not go, even as Rihanna tried to keep walking. Rihanna then turned around and hit the fan with her microphone before continuing her performance.

This isn’t the “Diamonds” singer’s first brush with a crazed fan. Rihanna was attacked by an angry fan as she was leaving a London club back in February. The man was angry that she had gotten back with on-again, off-again boyfriend Chris Brown and threw a soda bottle at her. The bottle hit her so hard that she stumbled and cut her knee on a metal drain.

A similar encounter with an aggressive fan happened to Beyonce last month during her concert in Copenhagen. The “Grown Woman” singer was performing her song “Irreplaceable” and was holding the microphone for fans to sing the chorus when a man reached up and slapped her butt. Beyonce then stopped singing and told the man she would have him escorted out. However, it appears the fan was never asked to leave the concert.

However, not all of Rihanna’s fan experiences have been negative. During a show in Holland in 2011, the singer asked, “Any fellas want to help me out,” before bringing a male fan on stage and giving him a lap dance during her performance. She pushed the man onto his back and straddled him, running his hand down her entire body. Footage of the performance surfaced earlier this month.

Do you think Rihanna went too far hitting the fan in the face with her microphone? Or was the fan being too aggressive by grabbing her arm and refusing to let go?

I don't know MS.P ( pray u na mind the abbreviation) I am not going to lose any sleep on this one!!! Fans are is short for Fanatic !!! Any questions!!! Bless up !!! But no I don't think she is wrong some people have to feel it in order to understand !!!! Bless up!!!