Hundreds of people from Tivoli and Denham Town poured into the streets, willing to DIE for DUDUS..... 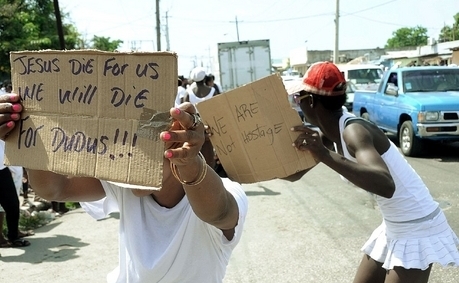 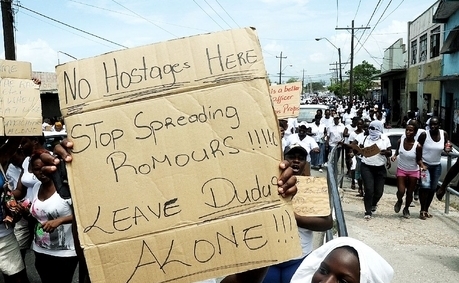 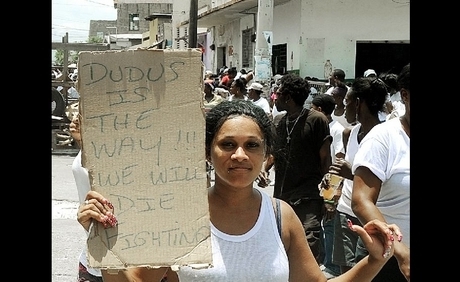 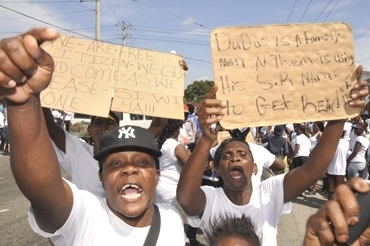 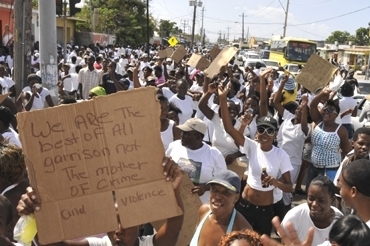 CHRISTOPHER 'Dudus' Coke's influence on West Kingston was put on show yesterday as hundreds of mostly women from Tivoli Gardens and Denham Town poured into the streets to show support for the man wanted by the US Government, and to vent their anger at a police claim that Tivoli Gardens residents were being held hostage by thugs.

In what appeared to be a highly organised but peaceful protest the demonstrators, the majority of them dressed in white, told the authorities to "leave 'Dudus' alone" with some boldly declaring that they were prepared to die for him.

No hostage, no hostage, we are free; is lie them telling," shouted the women.

"We are not being held hostage in our community and no one not taking away our phones," said one woman, in reference to a police report Wednesday that thugs were also seizing residents' cell phones.

Under the steely gaze of a large contingent of cops, the demonstrators gathered outside the Denham Town Police Station on Spanish Town Road, waving placards with their messages of support for Coke, whom the US Government has accused of trafficking in guns and drugs.

The Americans had submitted an extradition request for Coke last August, but the Jamaica Government had refused to sign it, arguing that the evidence presented by Washington was gathered in breach of Jamaican law.

The stalemate damaged relations between both countries which is just now being rebuilt after Prime Minister Bruce Golding -- under increasing pressure to resign -- announced in a national broadcast Monday night that his attorney general would sign the request giving the authority for the request to be processed.

But before Golding's broadcast, word of the Government's decision started circulating on the streets, triggering panic in Kingston, the Jamaican capital; and Spanish Town, the old capital, which is plagued by intermittent bouts of gang violence.

On Tuesday, residents of Tivoli Gardens, a community that is fiercely loyal to the ruling Jamaica Labour Party, and which serves as Coke's power base, started mounting blockades at all its entrances, using old motor vehicles, old refrigerators, large tyres, vendors' stalls and other heavy debris.

By Wednesday, the barricades were fortified with more debris, including propane gas cylinders and barbed wires which the police said were attached to Jamaica Public Service high voltage power lines.

The intention, the authorities said, was to keep the security forces out of the community, which has been the scene of deadly gunbattles between gunmen and law enforcers in the past and which, ironically, is in Golding's constituency.

Yesterday, the police, who now have an arrest warrant for Coke, said they had received information that thugs in the community were stocking up on petrol. The cops also said that their surveillance had shown that among the massive arsenal in Tivoli was the powerful 50 calibre Grizzly Big Boar rifle.

The rifle, produced by US company LAR Manufacturing, is described on that entity's website as being as "accurate as they are powerful, and should be a part of any serious collector's arsenal".

"The Grizzly Big Boar is a rifle that leaves its competition in the dust. Its powerful .50 calibre BMG round blows its targets to pieces while its careful design absorbs most of the recoil," the website said.

"The Big Boar was created for accuracy, and the match grade chamber provides unsurpassed accuracy by using a bullet that was designed to shoot straight and far. This single-shot, breech-loading rifle features a bull pup design with all steel construction to provide a solid, dependable firearm," the site said further.

Last night, a highly placed source said that the US authorities had information that weaponry of every calibre was inside Tivoli and that Coke's 'soldiers' were determined to prevent him being arrested.

Yesterday, the police said they intended to exhaust all peaceful means to arrest Coke and have already written to the attorneys who have been named as being on his defence team.

Police Commissioner Owen Ellington, in a message to members of the constabulary, expressed "gratitude and satisfaction with the professional and dignified way" in which they have responded to the Coke extradition issue.

Said Ellington: "Now that it has become an operational matter, a planned approach to its resolution is being pursued by the security forces. The police high command expects members to continue to perform their duties in a professional manner, exercising the requisite vigilance and alertness both on and off duty."

He added that the main effort at executing the arrest warrant will be directed from the high command.

Yesterday, the protesting West Kingston residents sang Coke's praises, saying that he had brought peace and discipline to the constituency and voiced their willingness to lay down their lives in his defence.

"Is over 40 years me live in the community," said one senior citizen. "Dudus is a nice and peaceful person. Because of him, people can walk without fear."

Said one man: "We are prepared to die for 'Dudus'."

Last night, the Presidents' Council -- a grouping of the heads of private sector organisations -- expressed grave concern for the welfare and safety of the residents of Tivoli Gardens and adjoining communities and called on the prime minister to add his voice to defuse the potentially explosive situation.

"The barricades must be removed so that law and order may be restored and the citizens may move about freely," said the council.

Comment by Keisha Brown on May 24, 2010 at 1:37pm
GOD WILL HELP...GOD WILL HELP THOSE THAT HELP THEMSELVES. LET THE PEOPLE STAND FOR WHAT THEY BELIEVE IN FOR DIVIDED THEY WILL FALL AND UNITED THEY WILL BE STRONG...THE DEMONSTRATIONS JAMAICANS HAVE CAN BE SPECULATED UPON...HOWEVER I BELIEVE THAT THE PEOPLE HAVE A BETTER SENSE OF WHAT IS GOING ON THAN YOU OR I HERE READING OTHERS MEDIA REPORTS...SO IF THEY COMPARE HIM TO WHOEVER LET THEM BE SO ENTITLED TO ARTICULATE THE OPPRESSION THEY FEEL...MY HEART GOES OUT TO THE LIVES THAT HAVE BEEN LOST....AND I WILL CONTINUE TO PRAY FOR ALL THE SOULS ....I LOVE YOU JAMAICA AND I WILL COME HOME TO HELP REBUILD IF NECESSARY....

Comment by Rosemarie Harris on May 24, 2010 at 1:01pm
Lord help us Are those placards for real? "After God Dudus comes next - Jesus die for us we will die for Dudus" - Uno crazy!!!! this demonstration ano free will a forced, - when uno mash-up, burn down and totally destroy Jamaica a who ago rebuild it - this is not destruction by natural cause so no aid na come from overseas or above

Comment by CARAMEL SWEETNESS on May 24, 2010 at 11:46am
no vacation for me>>>damm iwas really looking forward to going to jamaica

Comment by charmaine holgate on May 24, 2010 at 9:03am
well said by marie dennis theregoes my vacation

Comment by ALIZELICIOUS on May 24, 2010 at 12:56am
I think that they should leave Presi alone, Big up ur self presi be strong and God Bless I will keep u in my prayers.

Comment by sherene constantine on May 23, 2010 at 11:14pm
this issue need to be resolved because if not alot of innocent people
will die. violence is not the answer, for those of us in the states that still have
love ones out there, this is a major concern for us. jamaica govt need to change things
it was an issue with the father, now the son when is this going to stop

Comment by rudeboy1 on May 23, 2010 at 10:26pm
It brings tears to my eyes to see my people in the streets putting God in the same class as Dudus. Jamaica was once one of the most religious countries in the world now we are known for our violence, this will only kill the tourist business which will in turn put more people out of work. Do these folks realize if this keeps up then more people will go hungry because there will be less people willing to invest in Jamaica. I will continue to pray for my Island.