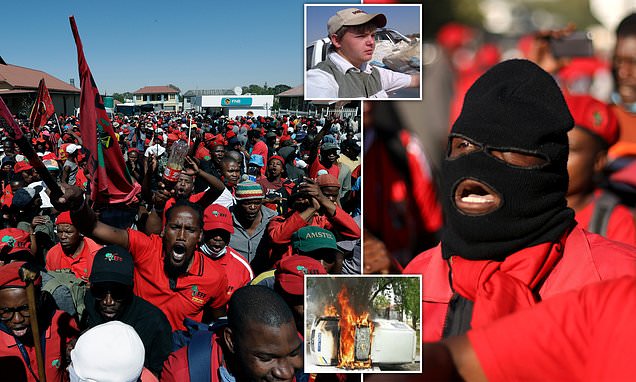 A South African town was bracing for racial violence today as black protesters armed with golf clubs and cricket bats faced off with white farmers in pick-up trucks outside a court where two black men are accused of killing a farmer.

The killing of Brendin Horner has led to riots in the town of Senekal where white protesters stormed the courthouse, fired shots and set fire to a police car last week.

Today, hundreds of black protesters linked to the Economic Freedom Fighters movement - which supports redistributing land from white people - gathered outside the courthouse with some hurling rocks despite efforts to keep calm.

The farmers, who accuse the government of failing to protect them from violent crime, arrived in pick-up trucks with some in military outfits and others waving 'Boer Lives Matter' banners at today's stand-off. 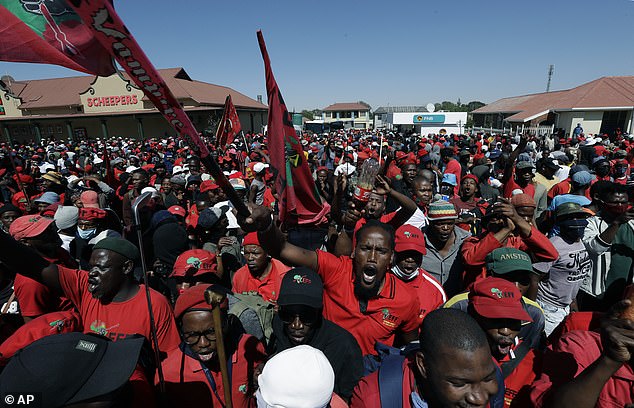 Black protesters linked to the Economic Freedom Fighters movement protest outside the court in Senekal today, with one man at the front holding what looks like a golf club 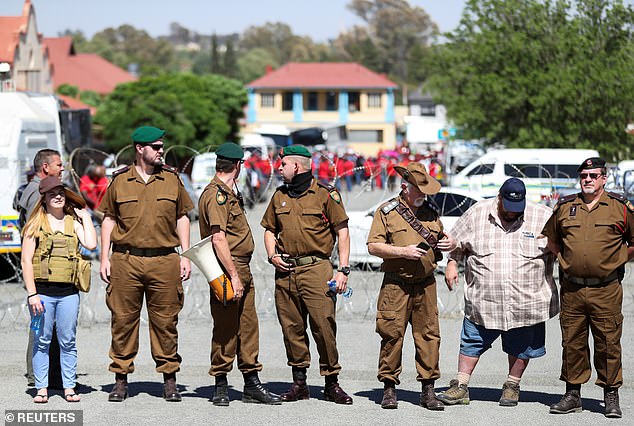 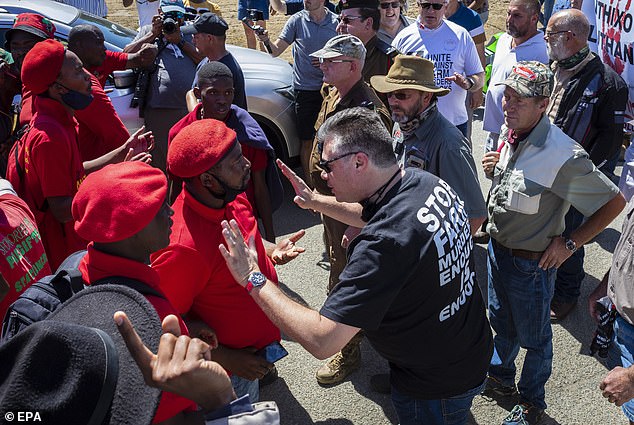 The small town has been thrust into an international spotlight after the protesting white farmers burst into the court hearing last week.

One of the murder suspects had been arrested 16 times before his latest detention over Horner's killing, police minister Bheki Cele said.

Freedom Fighters leader Julius Malema had warned that he would mobilise supporters to descend on Senekal ahead of today's bail hearing.

'We are going to face white men face-to- face,' Malema said in Johannesburg two days after he tweeted a picture of a rifle.

Wearing their trademark red shirts and berets, the Freedom Fighters staged a march attended by hundreds today while many white farmers arrived wearing khaki shirts and shorts, with some in military outfits.

'We must strike fear in the hearts of racists, they must never be comfortable in our democracy,' said a tweet from the Freedom Fighters' account today.

Police separated the two groups with razor wire in one street, but they regrouped and faced off in another area as police helicopters hovered overhead.

According to News24, some of the farmers said: 'We don't want a war, but what should we do, run away? We aren't cowards. We are here to show who and what we are.'

The outlet said some of the black protesters were threatening violence despite the efforts of marshals 'working very, very hard to control their supporters'. 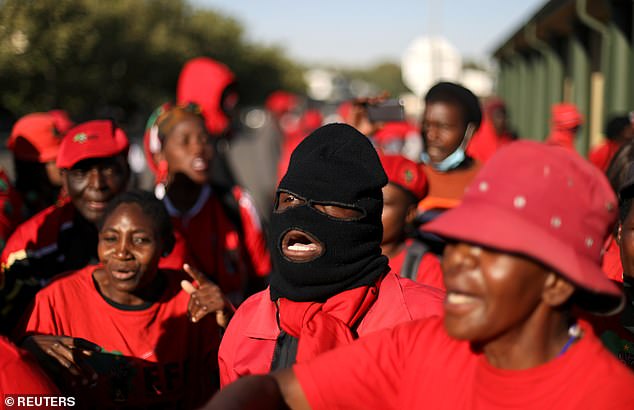 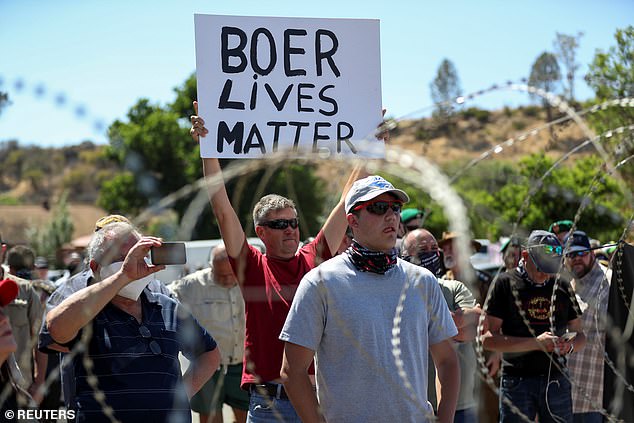 White protesters stand near the barbed wire with one man holding a 'Boer Lives Matter' placard, a reference to the white population which owns most of South Africa's farmland 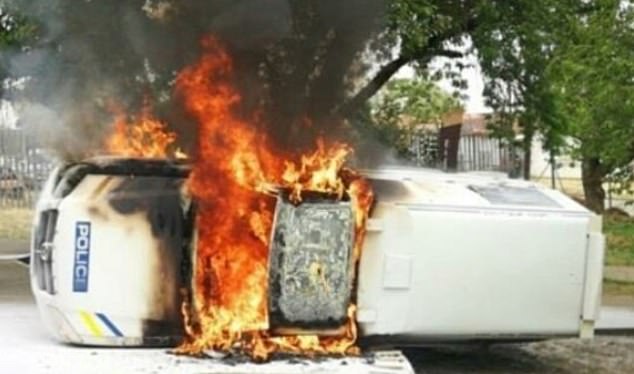 Last week: A police truck after it was set alight by white demonstrators who stormed a courthouse during the murder suspects' first appearance

President Cyril Ramaphosa on Monday urged people not to use the killing to inflame racial tensions, saying it 'shows how easily the tinderbox of race hatred can be ignited'.

'We must resist any attempts to use crime on farms to mobilise communities along racial lines,' he said.

Farm killings are an explosive issue in South Africa, where most private farmland is owned by white people 26 years after the end of apartheid.

White activist groups promote the idea that they are victims of a 'white genocide', but Ramaphosa insisted this week that 'killings on farm are not ethnic cleansing'.

'They are not genocidal. They are acts of criminality,' Ramaphosa said.

But Afriforum, a group representing Afrikaners who own most privatefarm land - said that Ramaphosa's words 'failed to resolve this crisis'.

'Part of the farm murder crisis is that senior politicians, also in the governing party, readily romanticise violence against farmers in their utterances,' Afriforum head Ernst Roets said. 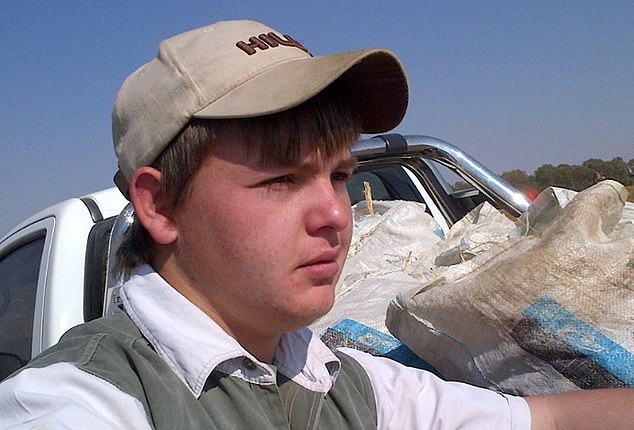 South Africa has the world's fifth-highest murder rate and white farmers account for only a tiny fraction of the total.

The government is preparing to expropriate white-owned land without compensation, as part of an effort to redress economic inequalities.

He also faces a possible charge of terrorism, according to the prosecuting authority.

John Mathuhle, a pastor in the town, said what was meant to be a 'peaceful' protest by the farmers outside the courthouse last week 'didn't really end well'.

'So as a result of that we had a lot of racial tension,' he said.

'We just pray for peace. Civil war will not start in Senekal and that is what we are here to say, no to civil war, no to racism, no to farm killings.'

Comment by vaughn mitchell on October 16, 2020 at 10:44pm
I think the blacks outnumber the whites, the white people can go back to australia, or wherever they came from, blacks are from south africa.

This looks like a serious explosive situation in South Africa..