The Florida - Haiti Interstate Tunnel, I-95U or Caribbean International Highway Route 1 is an under construction underwater highway tunnel spanning from southern Florida, outside of Miami to northern Haiti, the city of Cap-Haitien. The tunnel began construction in mid 2009, so far spanning 100 miles in length at the sea floor. The tunnel itself is expected completion by early 2011 with addition work completing by late 2011, spanning a total of 600 miles. The Caribbean International Highway construction was featured on Discovery Channel'sExtreme Engineering documentary series. 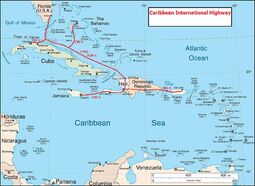 The Union of Everett interstate route number assigned to the tunnel is I-95U standing for Interstate 95 Underwater. The portion of the planned Caribbean Sea Tunnel, will span from Miami, Florida to Cap-Haitien in Haiti, a total of 600 miles of tunnel set at the bottom of the sea floor. I-95U will feature a rest stop every 50 miles containing fuel stations, food, restrooms and fire/medical/police centers. Everetti police stations will be located every hundred miles which would be used to respond to car accidents and other incidents. Fire/rescue and EMS stations will be located every 50 miles at each rest stop. I-95U will have a speed limit of 75 miles per hour, which will be enforced electronically rather than have police patrols. The tunnel will have three lanes of traffic for both the west bound and east bound sides, totalling six lanes. In addition to the road for cars, there will be three railroad lines, two of which are regular train lines and one will be part of the Maglev system as the Caribbean International Highway Line also called the I-95 Line.

I-95U is a concept tunnel as part of a global architecture test for a plan for a global highway that spans the Earth, originally conceived in the 1990s. If the 600 miles tunnel succeeds, it may lead to the planning stages of the global highway system.

Currently, 110 miles of the CIH-1 tunnel have been completed, spanning from Miami, Florida to the CIH-1/CIH-2 Interchange point. Construction involves the use of a massive crane barge which carries each of the 660 foot long sections of tunnel and lowers them into the water where they will be locked and sealed in place. Each tunnel section is 660 feet long, 140 feet wide and 25 feet tall, totalling 4,800 tunnel sections to be placed under the water. There are currently four barges working, each carrying two tunnel sections. A total of eight sections are laid a day, totalling one mile in distance added to the tunnel every 24 hours. Tunnel sections are produced and constructed on land in large warehouses.

Comment by PETER MCKENZIE on March 1, 2011 at 2:58am
it's call new world order, canada- usa- the caribbean & south america is going to use one currency just like the euro. The money is already printing, they control the weather ( google - HAARP ) & YOU WILL SEE what they did to HATI with the earthquake.

Wow, i think that's cool. I mean whenever i go to florida i can take a tunnel and be in Haiti? That sounds kind of exciting.

But I have a bad feeling about that too. I have a feeling them devils are trying to find a way to build on Haiti after it's been destroyed. Haiti is a beautiful island, and now that they got rid of well over 200,000 black people, they probably feel like it's safe for a take over.