Homosexual Agenda Taking Over Our Schools


Toddlers are learning about "rainbow sex", and men will soon be roaming free in women's bathrooms.

The push against marriage equality is gathering force.


It's all part of a Neo-Marxist agenda of cultural relativism that risks creating another stolen generation.

These are just some of the claims made by conservative commentators, Liberal MPs, Christian groups and journalists in recent times.

"The only way to win is to distract people and create fear and doubt." Tiernan Brady, who ran the "yes" campaign in the successful Irish referendum on same-sex marriage says the attacks on LGBTI people are part of a "proxy war"


As the march towards LGBTI inclusion and acceptance gains momentum, the push-back is extreme.

School programs, academics and even the AFL have come under fire for promoting the "homosexual agenda".

Leading the charge is Rupert Murdoch's The Australian, which is waging war on The Safe Schools Coalition – a program designed to make classrooms safer for gay and transgender students – publishing 76 negative articles on the topic in three months.

Echoing claims by the far right of the Liberal Party, its editorials have called for the organisation to be shut down, comparing the program to paedophiles grooming children.

Moral panic about the "homosexual agenda" is part of a plan to derail marriage equality, LGBTI advocates claim.


The paper has also depicted researchers on LGBTI issues as dangerous radicals, and accused same-sex parents of undermining the family structure.

So what is going on? Is this a good old-fashioned Australian culture war? Or is there a bigger end game?

Tiernan Brady believes it is a proxy war. And the real target is marriage equality.

"They [conservatives] know that ultimately the people of Australia are for marriage equality – the polls show it – so the only way to win is to distract people and try and create fear and doubt."

As one of the lead campaigners on the successful "yes" team for Ireland's 2015 same-sex marriage referendum, Brady says the moral panic in Australia has striking parallels to Ireland ahead of the national vote.

In the predominantly Catholic country, parents were warned that LGBTI advocates were trying to destroy the family and influence the way children were taught in schools.

"So much of the campaign was red herrings and misdirection when in fact this is a legitimate, straightforward question. It's about whether everyone in your family should have the same aspirations in life, and whether the law should protect them to ensure that's the case," he said. A couple kiss in Dublin Castle Square as the result of the May 2015 referendum is announced.

David van Gend, president of the Australian Marriage Forum, makes no secret of the fact his criticism of Safe Schools is linked to opposition to marriage reform*.

"Parents need to understand that the genderless agenda is a package deal: if they vote for 'marriage equality' they are voting for 'Safe Schools' on steroids and agreeing to relinquish control of their child's moral education to sexual radicals," he said.

"The end game of any revolution is to remake society in its own radical image: that is achieved largely through controlling the education of the next generation and by silencing dissenting voices."

As the July 2 election looms, sexuality has become a political football, with the Liberal Party vowing to defund Safe Schools next year after Malcolm Turnbull caved to the right wing of his party and gutted the program.  In contrast, Labor yesterday announced it would appoint a full-time LGBTI discrimination commissioner to the  Human Rights Commission. On marriage equality, Bill Shorten has also promised to legislate within 100 days.

The campaign against a reform supported by 72 per cent of Australians is already being fought on unlikely fronts, with the AFL being targeted for its first Pride game between St Kilda and Sydney, scheduled for August.

At a recent Liberal Party fundraiser for former Abbott government minister Kevin Andrews, leaflets were left on donors' dinner plates, claiming that by backing the "same-sex-attracted agenda" the AFL was not supporting "natural marriage". 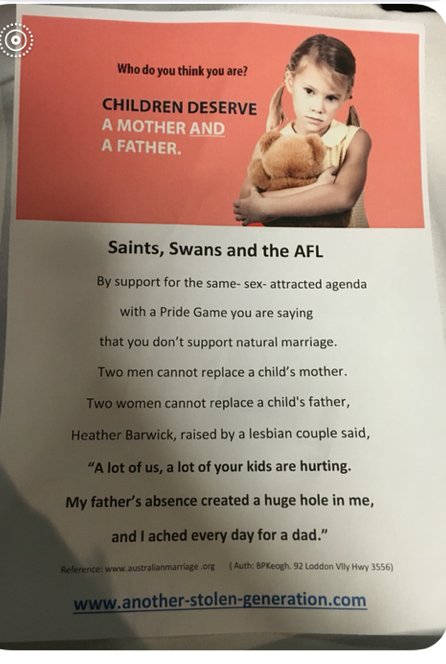 They're handing this baby out at the Abbott/Andrews/Sukkar dinner... #auspol

It linked to the website another-stolen-generation.com, which claims same-sex marriage removes the right of a child to a mother and a father. The same flyers were left on cars outside a game between Sandringham – St Kilda's VFL team – and Footscray last month.

The material was authorised by Brendan Keogh, former president of the Bendigo-Eaglehawk branch of the Australian Family Association, who claims he is not behind the stolen generation website but supports its position.

The Liberal Party distanced itself from the leaflets but it is a reminder of the unease within the conservative right on issues of sexuality and the political headache it presents for Turnbull.

It is in stark contrast to Victorian Premier Daniel Andrews, who has unapologetically championed equality with a range of reforms including a $15 million Pride Centre and a promise to cover the federal shortfall to fund Safe Schools.

But why is the conservative opposition to change so fierce?

"Equality comes at a cost to people who have power. The second that any minority is lifted up it means that power has to be given up a little," said Lauren Rosewarne, a senior lecturer in the School of Social and Political Sciences at the University of Melbourne.

"If you empower LGBTI people, if you've been traditionally harsh to these groups there's the fear for conservatives that if you help them they're going to bite the hand that feeds them."

Religious groups are also weighing in. Telstra last month bowed to pressure from the Catholic Church to withdraw its public support for marriage equality, only to backflip on its backflip after customers and staff threatened to boycott the company.

The "slippery slope" argument has also been invoked by the Marriage Alliance, which ran adverts in mainstream media depicting same sex marriage as the tip of an iceberg. An advert by Marriage Alliance against same-sex marriage.

Lyle Shelton, managing director of the Australian Christian Lobby – one of the most vocal opponents of reform – believes that redefining marriage will lead to unwanted consequences*.

"Our opposition to redefining marriage is based on our concern for social justice for children. Same-sex marriage creates inequality for children who are required to miss out on their mother or father because of the need to access assisted reproductive technologies such as anonymous sperm donation and commercial surrogacy," he said.

Brady, who is now based in Sydney working for Australian Marriage Equality ahead of a plebiscite, said the same argument was used in Ireland but "people saw right through it".

"Every child deserves a mother or a father was one of the slogans we saw in Ireland, but of course lesbian and gay people are raising children and they'll be raising children the day after a vote, whether or not that vote is for or against."

Shelton denied that the ACL's strident opposition to Safe Schools was part of a plan to undermine marriage equality reform, but added: "there is no doubt that legislating away the gender requirement for marriage means one has to accept the logic of gender fluidity which Safe Schools teaches".

Last week Shelton gained an unlikely ally in Catherine McGregor, the transgender former army adviser and close friend of Tony Abbott, who wrote in an opinion piece for The Daily Telegraph – which has run a series of pieces attacking trans people in recent weeks – that she could not support Safe Schools because it teaches a "derivative of Queer Theory" and was run by a "Trotskyite".

My column today in @dailytelegraph . Why I am proudly trans but cannot support Safe Schools.http://www.dailytelegraph.com.au/rendezview/i-am-transgender-and-i-oppose-safe-schools/news-story/7e194d1cc3037b6966b9fdab59871bf9 …

I am transgender. And I oppose Safe Schools

On Tuesday, I woke in an Adelaide hotel room overlooking the Adelaide Oval. Apart from Trent Bridge in Nottingham, Adelaide is my favourite ground in the world.

Sarah Maddison, Associate Professor of politics at the University of Melbourne, said the push-back against the gay and transgender rights movement drew parallels with the rise of feminism, when feminists and researchers were undermined and intimidated.

"The peak of the women's movement in the 1970s was followed up by that really devastating period of backlash, where so many of the cultural wins that women had gained were subtly and not so subtly attacked," she said.

"We saw the real emergence as a powerful force of the men's rights movement. We saw them infiltrate various government advisory boards, particularly around family law and parenting rights, and we saw government policy change as a direct influence."

While a poll on same-sex marriage is likely to return a "yes" vote, the tenor of the debate has already had consequences, with mental health services reporting a spike in demand for help from LGBTI young people following public attacks on Safe Schools.

Brady said it was vital that arguments put forward in a plebiscite campaign remained respectful on both sides and people with doubts were allowed to raise them.

"That fear of the unforseen impact is real. But the great thing about amazing social change is that people worry about it right up until it happens and when it happens people can't imagine what the world was like without it," he said.

"There are so many countries that Australia can look to and see that the sky didn't fall in, nobody got hurt, this doesn't have a negative impact on anybody. It just has an incredibly positive impact on our lesbian and gay friends and family."