Homelessness in San Francisco is now so bad residents are being asked to house a homeless person in their OWN HOMES: Politicians and charities claim locals want to be part of the solution 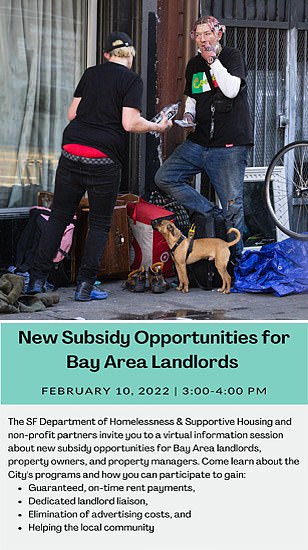 Homelessness in the Bay Area has become such a problem people are being urged to give their spare rooms over to the homeless.

Some charities have urged local families - who are sick of seeing the homeless crisis on their doorsteps - to do something about it personally by taking unhoused people into their own homes and spare rooms - and some schemes have little to no compensation.

Christi Carpenter, executive director of East Bay nonprofit Safe Time, which places homeless families and college students in spare bedrooms, for one-six months, told Mercury News: 'This is something that someone can do when they just feel that despair of 'oh my gosh, I just can't stand seeing these poor people on the streets near my home.' Since 2017, the group has made more than 60 placements.

The mayor of Richmond, a city in the Bay Area 20 miles from downtown San Francisco, meanwhile, has set up a program to match homeless people with local landlords who have empty apartments.

Funded by private donations, it will pay the landlords a year's rent up front to encourage them to forgo the usual credit, employment and background checks for tenants.

'That's the carrot,' Mayor Tom Butt told DailyMail, adding that they were paid the market rate.

'But we have had some landlords come forward and offer it lower, as they want to participate.'

Asked whether people expressed concern about the potential dangers of welcoming homeless people into their homes or apartments, he insisted that people care more about the plight of unhoused people and the homeless camps.

'They are more concerned with the homeless camps,' he said. 'People want to see solutions, and want to be part of the solution.'

He also claims he has not faced any concerns about the tenants from those housing them, because as the apartments were lower end in the first place - so they would always attract renters with less secure and affluent circumstances. 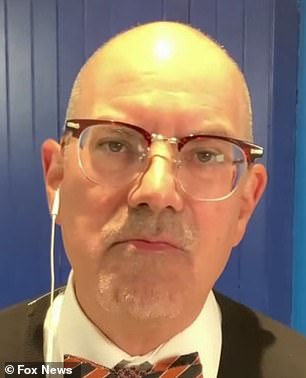 Tom Butt, the mayor of San Francisco district Richmond, (right) insists that people were more concerned about helping the homeless than the potential dangers of taking in a homeless person - but Richie Greenberg (left) slammed the scheme as 'creepy' 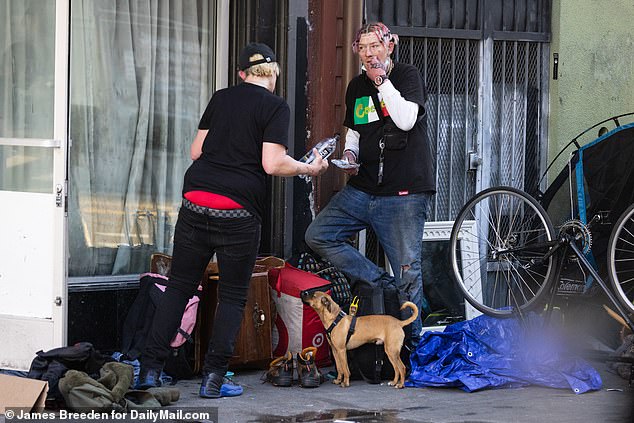 Homeless people are seen on the streets of San Francisco on January 23, as the mayor declares a state of emergency and a crop of new schemes to provide housing are promoted 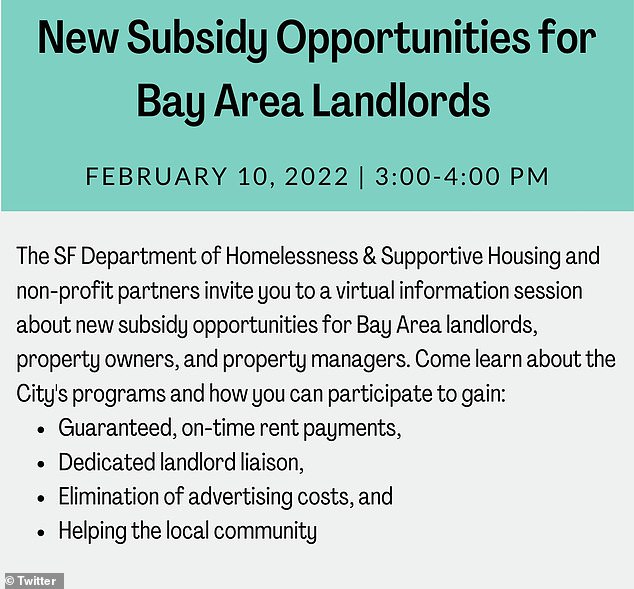 Zach Stein and his wife housed a young woman for three months in 2020 through Safe Time, putting her up in their Bay Area home in Albany.

'In some ways, it was really weird,' he said.

But they intend to do it again, once their newborn is older - explaining that they were able to buy their house because they inherited money, and they want to share that good luck with those less fortunate.

'Being in a position to do that, especially in a place like the Bay Area, it felt really important to us to find ways to open that up.'

Another group, the Homecoming Project, houses former prisoners - paying homeowners in Alameda and Contra Costa counties $30 a day to house someone in a spare bedroom for six months.

Each former inmate is matched with a case manager to help them find a job and save money for a permanent home. Sex offenders aren't eligible.

'When we first started talking about this project people thought we were crazy. You're going to put somebody from prison into somebody's house?' said Aishatu Yusuf, vice president of innovation programs at Impact Justice, which runs the project. 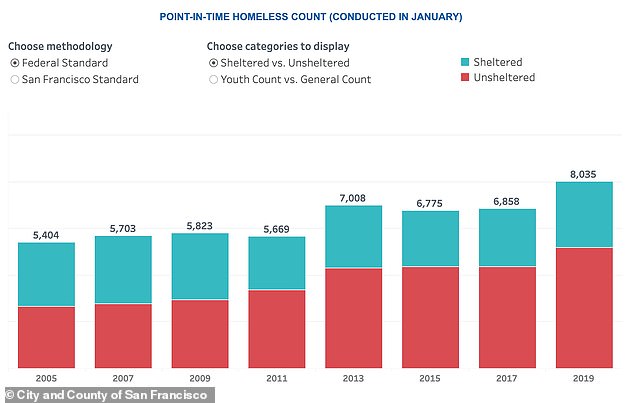 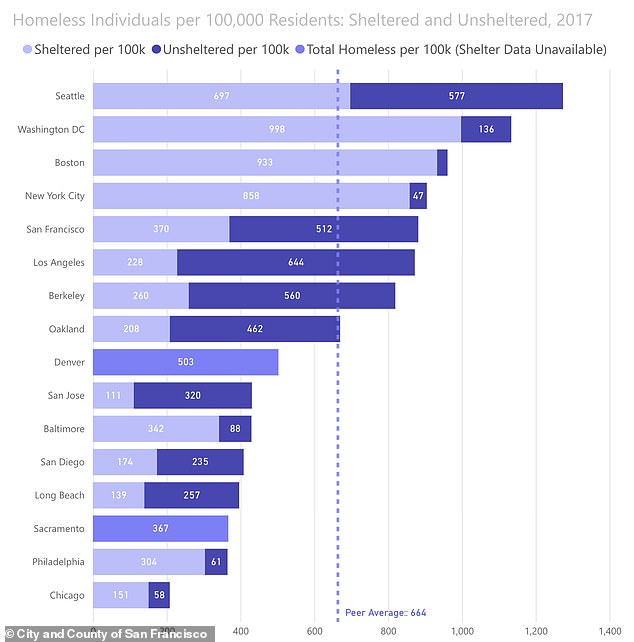 But the nonprofit has housed nearly 70 people so far, none of whom have gone back to jail or prison.

And on Thursday, the San Francisco department of homelessness will hold a seminar to encourage landlords to rent out their homes for homeless, with the local government picking up the tab.

The schemes are just the latest attempt to solve the San Francisco area's homeless problem, which in December forced the mayor, London Breed, to declare a state of emergency. Over 8,000 people are currently believed to be homeless in the city - up from 5,600 a decade ago. In the five-county Bay Area, the figure rises to nearly 30,000.

However, not everyone is happy with the solution.

Richie Greenberg, the only Republican to challenge San Francisco Mayor London Breed in the 2018 special election, told DailyMail.com slammed the schemes as a publicity stunt and downright 'creepy.'

'The sheer number of people, and the reasons behind them being homeless, means it won't have an impact,' he said.

Greenberg, a small business advisor, said that because the majority of the homeless were mentally ill or drug addicts, they would not be assisted by the programs.

What was needed, he said, was more facilities for drug rehabilitation and a way of caring for the mentally ill so they did not harm themselves or others. 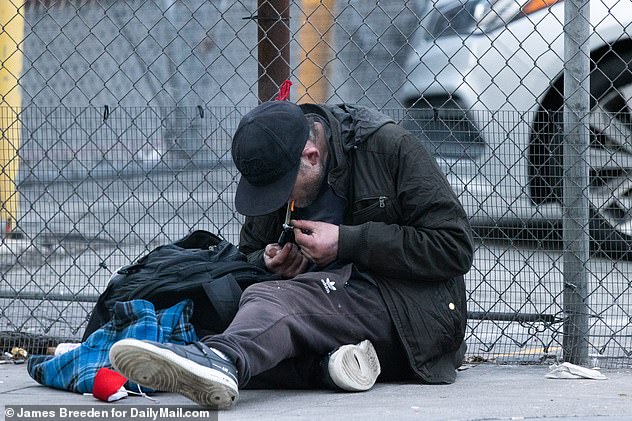 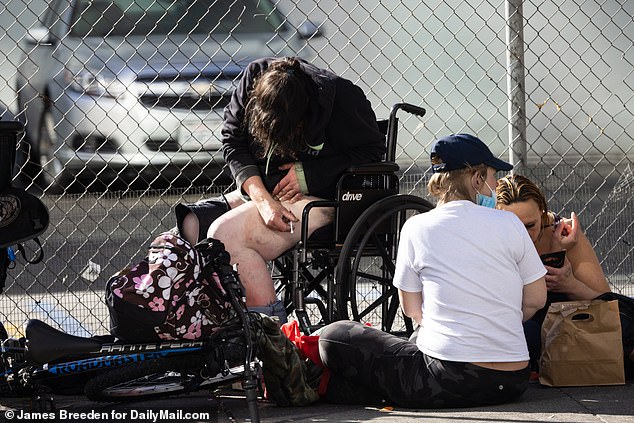 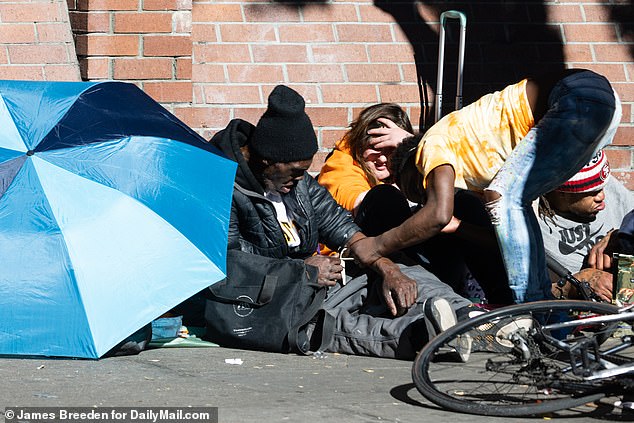 Drug use is rampant among the homeless in San Francisco, and the addicts will not be helped by the new schemes

He said the idea of individuals opening up their doors for the common good was not new - especially in San Francisco - but it was not a long-term, scalable solution.

'This is not a new idea - it's been floated for many years,' he said. 'Particularly in San Francisco - it goes back to freedom, and the summer of love, and hippies and communal houses, with strangers crashing on your couch.

'It's not an unheard of concept. But we're not talking about flower children. Now it gets a bit absurd.'

Greenberg continued: 'A very high percentage of San Francisco's homeless people are homeless because they are addicted to drugs or mentally ill. So the number of candidates is going to be quite limited.

'It won't be the mentally ill or drug addicts, who account for around 60-70 percent.'

He said the proposal was 'unrealistic'. 'Secondly, it's creepy,' he said.

'If you are looking for a room mate, that's one thing - you can check references, and talk to people at their previous places. But these are not that kind of people. A lot are down on their luck.'

In Richmond, Mayor Butt, 77, had joined forces with the Rotary Club to match unhoused people with local landlords - and has already placed a family of six, including four children, who were living in an RV encampment.

'I got disgusted at throwing all this money at the problem without any thought of the end result,' Butt told DailyMail.com.

'I had access to some funding and thought, I can't solve the whole problem. But I can move people out of RVs and tents into apartments.

'So I partnered with the local Rotary Club, and they pivoted to prioritizing people in housing, rather than showers for camps.'

Butt said he had to 'provide some kind of incentive to landlords,' and so he is paying the year's rent up-front.

Richmond's homeless issue is comparatively small, with estimates of between 300 and 1,000 homeless people - Butt believes it is closer to the lower end of the scale.

'The big picture is that there are 160,000 homeless people in California, and unless we do something different, there will still be 160,000 ten years from now.

'If you take those 160,000 and multiply that by the average cost of a one bedroom apartment, the cost is $1 billion.

'California's state budget is $300 billion a year. So for less than 1 percent of the annual state budget, you have provided housing for all.'

Asked what he would say to those who argue his plan would encourage homeless to flock to California from other states, in search of free housing, he said it was a risk they could 'work out' if it happened.

'None of the things that are happening now are working,' he said.

'None have an end game. They are just throwing money at it.

'Last year, in Richmond, we spent $1.5 million just servicing homeless camps - with that money, we could have bought 77 one-bed or studio apartments.

'We're the richest country in the world, and California brags about being the fifth largest economy.

time will come where there will be no homelessness..

Take them into your home! Huh....WHAT? How bout building homeless shelters or housing for them. You have more than enough wealthy people that live in that state.

Comment by Robert on February 10, 2022 at 7:13am
Nancy Pelosi's constituents ,3rd person away from being president.

Damn, just put them on a deserted Island and give them all the drugs they want and let them breed.