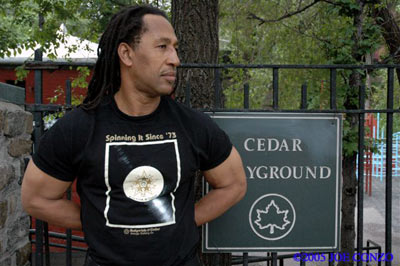 The man credited with being The Founding Father of Hip Hop is gravely ill and is reaching out for public assistance to help pay his medical bills.

"Kool Herc is very sick," DJ Premier told listeners on his XM satellite radio show according to  AllHipHop. "For those that know about Hip-Hop, who we call the father of Hip-Hop, Kool Herc, is not doing well. It's funny how we have a father of a culture that still lives, where as in some cultures they are dead and gone even though they may still be worshiped or reflected on in some kind of way."

The call for help is because Herc doesn't have health insurance. If you've ever been to the hospital without it, you know how you're treated.


"Being as though he is the man that set this whole culture off, y'all [the fans] should be willing any type of way you can." Premier added

Comment by mr fix on January 31, 2011 at 5:56pm
THE ONLY WAY THESE BASTARD WILL GIVE A HAND ONLY IF WE TAKE IT TO THE STREET TO BET, MTV, VH1 OTHER WISE YOU CAN FORGET IT.

Comment by Alina on January 31, 2011 at 2:17pm
When Hip Hop started it was about music! Rappers in those times didn't get paid no were near to what rappers get now.  It's become very Corporate and I agree with Mikaeel Abdul-Malik that the Rappers of today should all give a Hand!

See what I mean? Yes, it's sad. In fact, where all the people on this feedback besides us? They concerned to make an effort to comment on stupidity, than on real important issues. Where my sisters? Where's that motherly concern n' caring instinct, instead of that drama-infused, jealous side that just gets activated over b.s.! Wishing him the best, and as y'all say, the folks with money who can afford to contribute, hopefully they do their part, even small portion (relatively speaking to their personal possessions, which after all, is their right to own) will help!

Comment by Lemara Tone on January 31, 2011 at 1:28pm
neva eard of him. surly he mus have $$ stashed off some where.
Just as IslandgirlNy said they can pay a few bucks and get health care and pay the rest later. Wat was obama for wen he talked about health care for the US This might be a scam. These things happen all the time. u dont know wats genuine from wat isn't.

Comment by Malcolm X on January 31, 2011 at 1:26pm
Even elvis presley helped to pay jackie wison's medical bills because he knew he invented the music tha made elvis rich, but we don't jay z lil wayne, or 50 cent givin a hand

For those who never heard of him he was born in Jamaica. Started giving free parties in the parks around 1520 sedgwick avenue. He said he wanted to give parties here like the ones he saw back home in jamaica he originally called it toasting. He would take break beats from james brown and other performers who used funk style rhythms. Soon kids from all over the bronx and harleem were copying him.

Then the udults came in and started renting hall and making money. Then the sugar hill gang made the frist succeful rap record using raps they stole from other street hip hopper like Kool Herc

Comment by Malcolm X on January 31, 2011 at 1:18pm
I grew up on burnside avenue down the block from Cedar (Park) Playground. I remember when he and grand master flash used to give free parties there. In the begining it started out nice. Even some white kids would show up. The sad part is he never made any real money from hip hop but managed to stay out of jail and trouble. When I look at all these ex and future felons who took over the rap game I wonder if the biblical saying is true: "It is easier for a camel to pass through the eye of a needle than it is for a rich man to get into heaven.