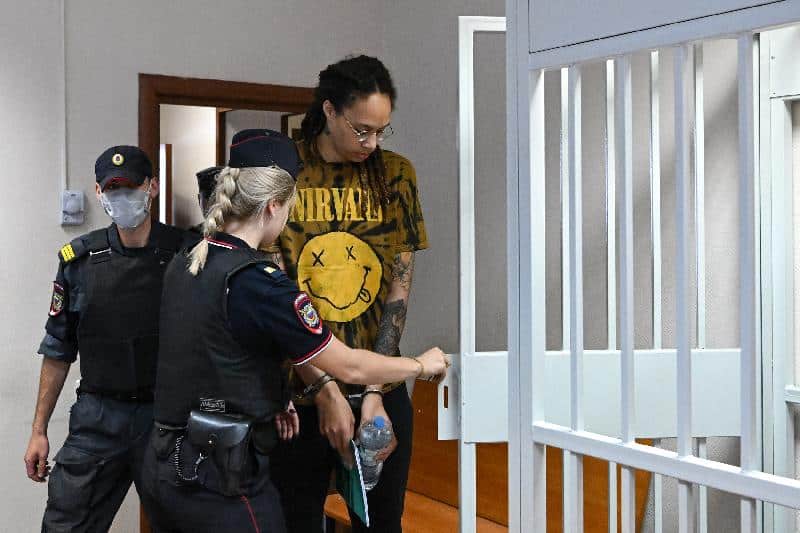 *WNBA star Brittney Griner has been found guilty by a Russian court of smuggling drugs into the country with criminal intent. She was sentenced to 9 years in prison, People reports.

Griner has been detained in Russia since February on accusations of smuggling cannabis oil, which is illegal in the country. Last month, she pleaded guilty to drug charges. “I was in a rush packing and the cartridges accidentally ended up in my bag,” Griner told the court in Khimki, BBC reported.

The American athlete faced up to 10 years in jail for the charge. During closing arguments this week, prosecutors asked for 9.5 years, CNN reports.

The United States had offered to release Russian arms dealer Viktor Bout, known as the “Merchant of Death” in exchange for Griner and former U.S. Marine Paul Whelan. 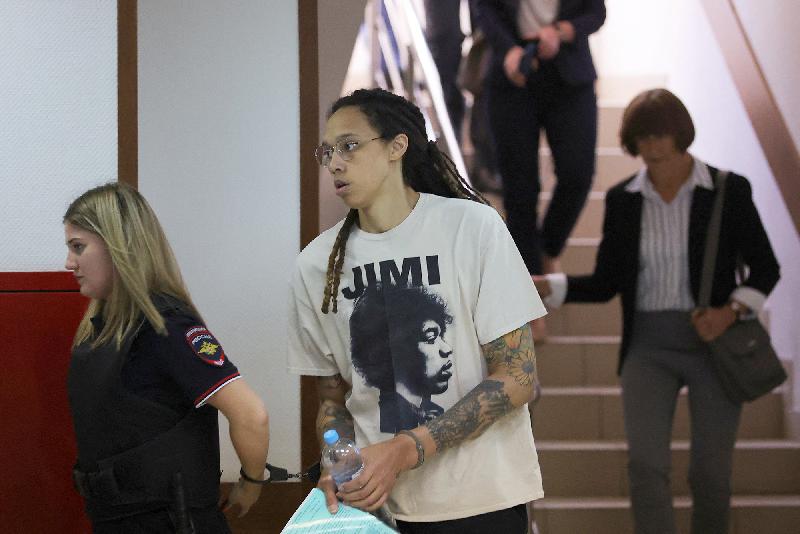 As we reported previously, former President Trump called Griner “spoiled” during a recent interview on the Clay Travis & Buck Sexton Show. He also noted that a prisoner exchange for a Russian arms dealer “doesn’t seem like a very good trade.”

As reported by CNN, prior to the verdict, Griner apologized to the court and asked for leniency.

“I never meant to hurt anybody, I never meant to put in jeopardy the Russian population, I never meant to break any laws here,” Griner said in the Khimki city courthouse, near Moscow. “I made an honest mistake and I hope that in your ruling that it doesn’t end my life here. I know everybody keeps talking about political pawn and politics, but I hope that that is far from this courtroom.

“I want to say again that I had no intent on breaking any Russian laws. I had no intent. I did not conspire or plan to commit this crime,” she added.

Per Daily Mail, the White House has been unable to negotiate a prisoner swap to bring the two-time US Olympic basketball gold medalist home.

President Joe Biden reacted to the verdict, saying: “Russia is wrongfully detaining Brittney. It’s unacceptable, and I call on Russia to release her immediately so she can be with her wife, loved ones, friends, and teammates.”

He said the White House will pursue “every possible avenue” to bring her home. 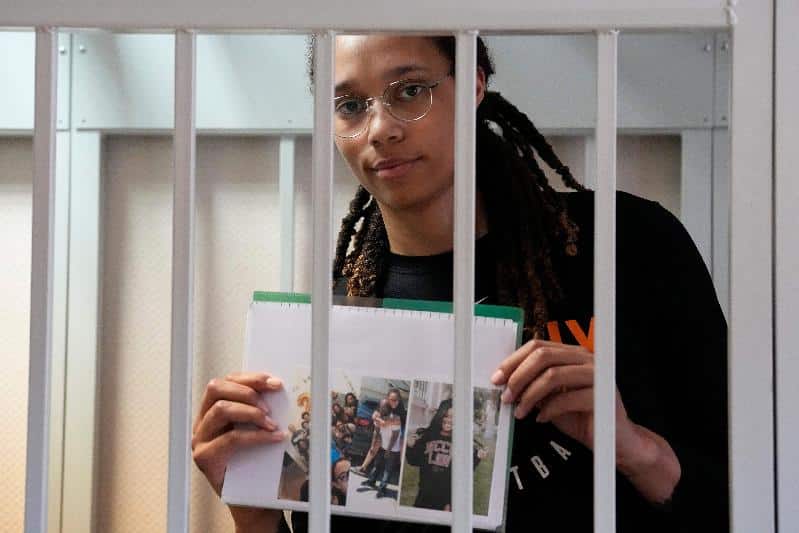 This week’s trial proceedings in Russia over WNBA star Brittney Griner‘s detention have shed more light on the details of her arrest, including her testimony that she wasn’t provided key information on her rights granted under Russian law

Seated in a courtroom near Moscow Wednesday, Griner denied accusations from prosecutors of drug smuggling and said she did not intend to bring cannabis oil found in her luggage in February into Russia at all.

Griner pleaded guilty to the charges earlier this month in an attempt to mitigate her sentence, which could be up to 10 years in prison. Her arrest and trial have been the source of international outcry, and the US State Department has classified her detention as wrongful.

Yet as her trial is expected to continue into next month, CNN has learned the Biden administration offered Russia a prisoner exchange of Griner and fellow detained American Paul Whelan for a convicted Russian arms trafficker serving a 25-year sentence in the US — a proposal that Griner’s Russian lawyers say caught them unaware

Here are the latest developments in Griner’s trial and what may lie ahead:

After being stopped by personnel at the Sheremetyevo International Airport on February 17 and asked to open her bags, Griner’s luggage was found to contain what amounted to less than one gram of cannabis oil, according to Russian prosecutors.

Brittney Griner holds photographs standing inside a defendant’s cage before a hearing at a court outside Moscow on July 27. – (Alexander Zemlianichenko-Pool-AFP-Getty Images

No attorney was present, Griner testified, and she said her rights were not explained to her, which, according to Russian law, should have occurred within three hours. Those rights would include her right to know what she was suspected of and to have access to a defense attorney from the moment she was detained — including the ability to have a private meeting before her first interrogation by authorities.

Griner signed documents that were unclear to her, she said, and she had to use Google Translate on her phone to try and make sense of what was happening.

Griner’s detention, search and arrest were “improper,” Alexander Boykov, one of her lawyers, said Wednesday. More details would be revealed, he said, during closing arguments expected to take place “in a manner of a couple of weeks.” 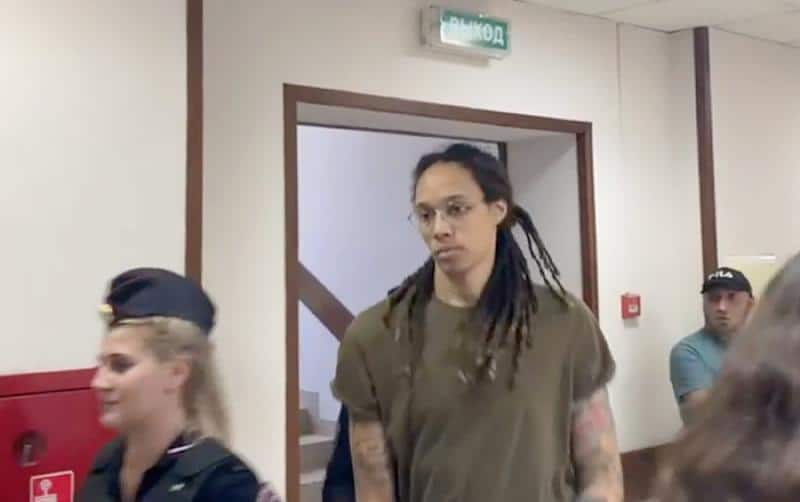 The two-time Olympic gold medalist was aware of Russian drug laws, she testified, and the cannabis oil was in her luggage due to “stress packing” in a rush.

“I still don’t understand to this day how they ended up in my bags,” Griner said.

Griner “confirmed that she had a doctor’s prescription for the use of medical cannabis,” which “is quite a popular treatment among professional athletes. She emphasized that she never planned to bring it to Russia and use it,” attorney Maria Blagovolina told reporters after the hearing.

A knee injury forced her into a wheelchair for four months, Griner told the court, and she used the substance for inflamed knee and ankle joints. She also emphasized she did not use it before tournaments to prevent possible disqualifications.

“No, I would never risk that. I never wanted to hurt my team,” Griner said. She was tested for drugs, her lawyers previously said, and was clean.

Griner “explained to the court that she knows and respects Russian laws and never intended to break them,” Blagovolina said. Griner also told the court she enjoyed playing basketball in Russia during the WNBA’s offseason and that her club, UMMC Ekaterinburg, became a second home to her, Blagovolina said

“We continue to insist that, by indiscretion, in a hurry, she packed her suitcase and did not pay attention to the fact that substances allowed for use in the United States ended up in this suitcase and arrived in the Russian Federation,” Boykov said.

Amid Griner’s detention and trial, months of internal debate by the Biden administration culminated in an offer by the US to exchange Griner and Whelan — whose Russian prison sentence has been denounced by the US as unfair — with convicted arms dealer Viktor Bout, people briefed on the matter tell CNN

The plan received the backing of President Joe Biden and overrides opposition from the Department of Justice, which generally frowns upon prisoner trades, according to the sources.

Secretary of State Antony Blinken said Biden was “directly involved” and signed off on the proposal” presented to Moscow, but he declined to provide further details or confirm Bout as part of the proposal. Blinken said he also intends to speak with Russian Foreign Minister Sergey Lavrov in the coming days — their first conversation since Russia’s invasion of Ukraine.

However, when asked about the offer Thursday, Kremlin spokesperson Dmitry Peskov told reporters, “So far there is no agreement on this issue.”

“Look, since there are no agreements now that would be finalized, then, accordingly, I have nothing more to add to what has been said,” Peskov said.

Griner’s attorneys, Blagovolina and Boykov, learned of the possible swap through news reports, they said. While not participating in those discussions, the two said they would be pleased with any productive results.

“From the legal perspective, the swap is possible only after the court reaches a verdict. In any case, we would be really happy if Brittney will be able to come home and hope it will be soon,” they said.

Griner is due to return to Khimki regional court August 2

Since the reporting of the proposed swap became public, officials say families have been kept abreast of certain developments and supporters have expressed hope that the deal is accepted by Russia.

David Whelan, Paul’s brother, said in a statement, “Our family appreciates the Biden Administration seeking Paul’s release using the resources it has available. We hope the Russian government responds to the US government and accepts this or some other concession that enables Paul to come home to his family.”

Trevor Reed, a Marine veteran who returned to the US in a prisoner swap earlier this year after being detained in Russia for more than two years, told CNN’s Jake Tapper that he thinks Griner and Whelan “have a really good chance” of making it home, “especially considering the transparency that the administration has used in this.”

“I think that, you know, if the Russians are not stupid then they’ll take that offer,” Reed said

Rep. Colin Allred of Texas, who worked to pass a bipartisan House resolution calling for Griner’s release, said it was critical hearing Griner’s testimony and that she has done her best to present herself in court, but it may not be enough depending on how the Russian government reacts.

“The only reason we’re having this conversation is because they’re trying to use her for leverage against the United States,” Allred told CNN’s Wolf Blitzer. “Clearly we’re having to do whatever it takes to get her home, and I’m hoping this package will be accepted by the Russians.”

Natasha and the Bull Daggers will keep her company, Trump could have talked to his boyfriend Putin to release her, ah him?