Blac Chyna reportedly had some plastic surgery done recently, and the results are not good. According to multiple online reports, she had some unspecified surgery done to her face and is now unrecognizable - in a BAD way.

Up to this point, Blac Chyna was regarded by many as a very beautiful woman but it appears that her recent trips to the plastic surgeon have not only ruined her face but left her looking somewhat bizarre.

MTO News obtained screenshots of Chyna's new face, taken from a recent IG LIVE that she gave on makeup and her appearance was a bit disturbing.

Here is the image of her face, when she's not wearing her wig:

And when she's wearing her wig, it's not much better either. Here's a recent pic of Chyna:

Black Chyna is a model and entrepreneur. In 2014, she launched her own make-up brand Lashed by Blac Chyna and a beauty salon in Encino, Los Angeles. Chyna has appeared in numerous reality television shows, including E!'s Keeping Up with the Kardashians and Rob & Chyna, Zeus Network's The Real Blac Chyna and Tokyo Toni's Finding Love ASAP!, and VH1's Love & Hip Hop: Hollywood.

And here's what Chyna looked like back in high school:

Blac Chyna got a bunch of plastic surgery over the years. But her most recent operation, a "chin job", may be her most controversial one yet. She unveiled her brand new face yesterday at the Oscar's Red Carpet.

Some on social media are surprised that Chyna was invited to walk the Oscar's red carpet in the first place. But they were even more shocked, by her new face - especially her chin.

Chyna appears to have gotten a "chin job". Chin enhancement surgery, also called genioplasty, which is designed to improve the contours of the chin, neck and jawline.

Typically, the surgery involves placement of an implant around a patient’s existing chin bone to augment the size and shape of the chin and achieve a more naturally attractive balance between facial features.

But genioplasty can also include the doctors breaking and then re-setting the patients jawline, to achieve a more chiseled look.

When performed by a qualified, experienced cosmetic surgeon, chin enhancement can provide a permanent solution for improvement of a weak or recessed chin.

Here are some pics, showing the before and after:

When Blac Chyna stepped out for the Academy Awards people were left wondering how she got an invite since she wasn't involved professionally with any film nominated this year.

"How tf did Blac Chyna finesse her way into the #Oscars?!" asked a user on Twitter.

"Why is Blac Chyna at the oscars?! If they're just giving invites to anyone, can I get one next year please?" questioned another.

According to her Instagram account, it was her first time at the Oscars and she was the plus one of record producer and recording engineer Christopher Trujillo aka Tito Just Music.

Chyna also reportedly avoided the Kardashian-Jenner family at the Oscars after-party because of her ongoing custody battle with baby daddy Rob Kardashian. The former couple shares a three-year-old daughter, Dream Kardashian, together.

Rob reportedly filed for primary custody of Dream in January because he has "concerns about Chyna’s partying,” according to a source who spoke to People magazine.

Harvard says Blac Chyna lied about being admitted to the school

Blac Chyna got real about her relationship with the Kardashians, that violent fight with her hairdresser, and why she lied about getting admitted to Harvard.

The model and reality show star had said that she was taking a business course with the Ivy League institution, but the school replied she has not been admitted, published reports say 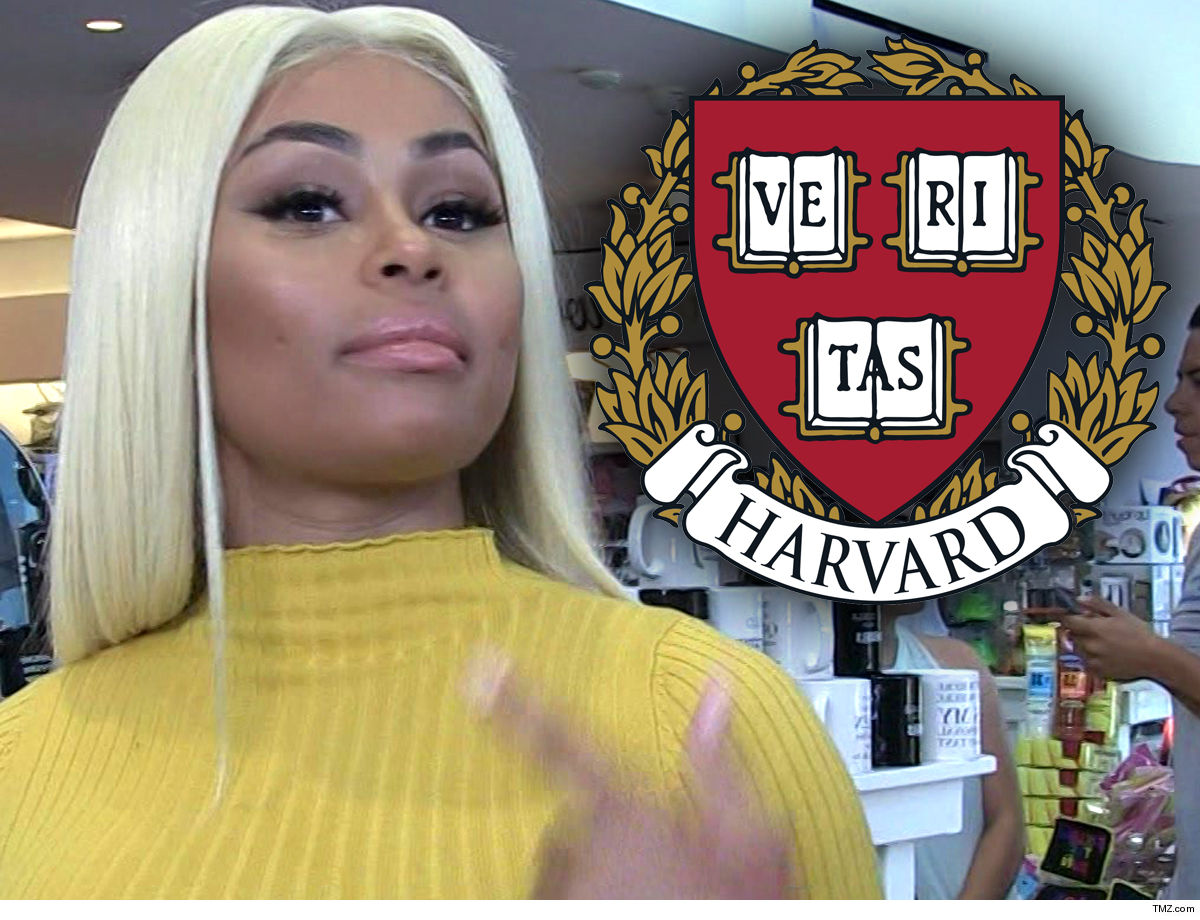 2:07 PM PT -- Blac Chyna isn't coming close to sniffing a degree or a certificate from Harvard ... the school is totally disavowing her.

Referring to her alleged acceptance -- and the letter her team gave us -- Chyna told us, "School is going to help me take things up a couple of notches. People are always talking about me, might as well talk about the good."

Not looking so good right now.

We've reached out to Chyna's camp, but so far ... radio silence.

Blac Chyna's interest in attending a Harvard Business School Online course was hatched by a PR firm that offered to do all the work and even take a pic of her wearing a Harvard hoodie ... for a price.

We found out Chyna got wind of the course through an email sent to her team by Christian Emiliano, who refers to himself as Social Media Renaissance Man.

Christian's email pitch ... for $3,250, "Our team will complete all the course work for you, all you have to do is take one test (we will provide you the study guide) and then take credit for the program." Once completed, Chyna could add the Harvard education to her resume and improve her brand. 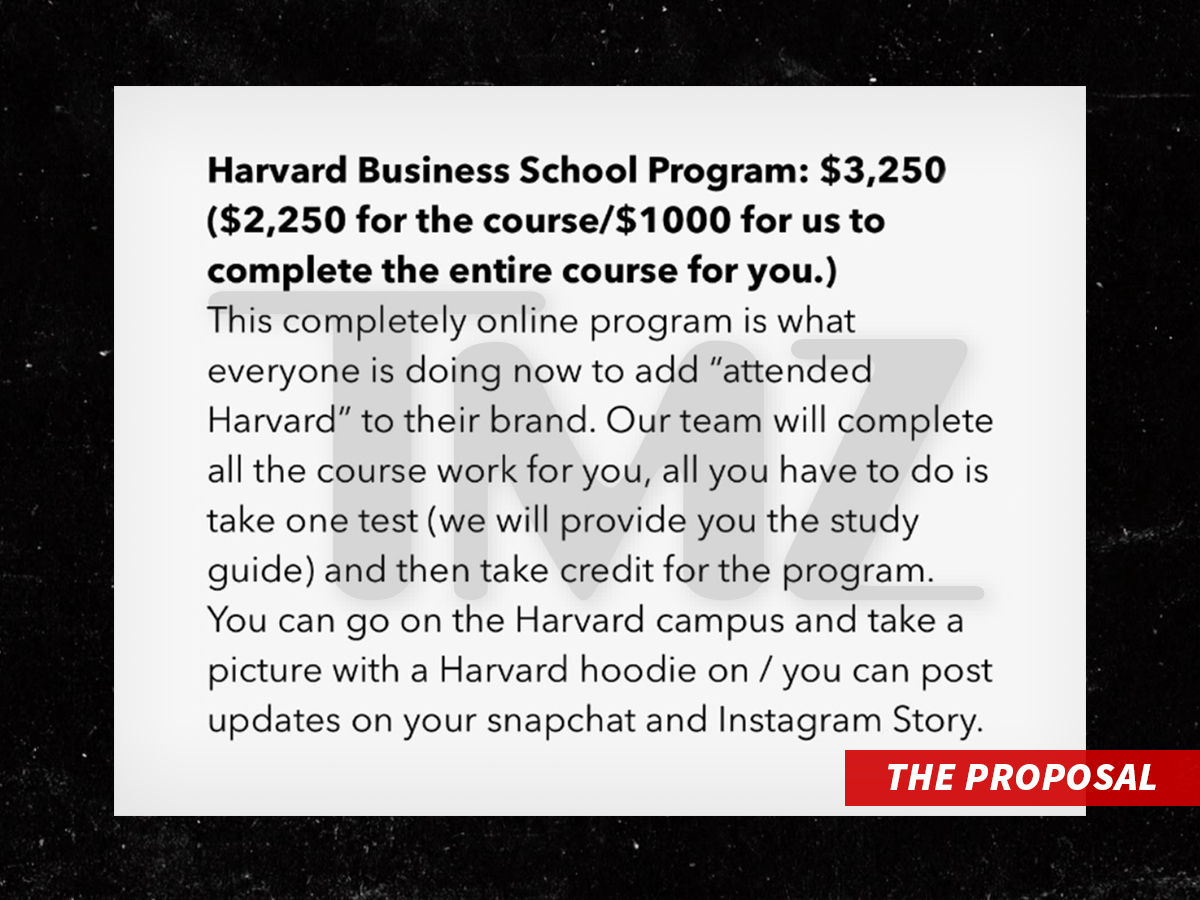 We contacted Chyna's people, and although they acknowledge they got Christian's pitch, Chyna never hired him and decided to take the course on her own. Christian confirmed that to us as well.
Turns out ... after we posted our story this morning, another social media star also posted her admission letter to the Harvard Business School Online course.
So, Christian may not be Rick Singer -- the guy who got Olivia Jade and Isabella into USC after Lori Loughlin and her husband paid $500k -- but his proposal seems to offer the same underhanded way to succeed in college without really trying.

Harvard Business School is saying that documents Blac Chyna reps presented to show she’d been admitted to the institution are fake, TMZ is reporting.

TMZ also unearthed emails between the social media personality and publicist Christian Emiliano in which he offers to complete her degree at a total cost of $3,250.

“Our team will complete all the course work for you,” one email read. “All you have to do is take one test (we will provide you the study guide) and then take credit for the program.”

“You can go on the Harvard campus and take a picture with a Harvard hoodie on / you can post updates on your Snapchat and Instagram story.”

Earlier, Blac Chyna, whose given name is Angela White, told TMZ that she’d be taking a course in Business Analytics with Harvard Business School Online.

“School is going to help me take things up a couple of notches,” Chyna told TMZ. “People are always talking about me — might as well talk about the good.”

Chyna’s representatives provided TMZ with documents that appeared to confirm she’d be taking part in the Harvard class, the news organization reported.

The Ivy League institution in Cambridge, Mass., however, told TMZ that Blac Chyna was telling a falsehood.

“Harvard Business School Online has not admitted nor provided an acceptance letter to a person named Angela White,” TMZ reported the school said.”

TMZ contacted Blac Chyna’s representatives, who told the news organization that they did receive the pitch from the publicist, but also pointed out that Chyna never agreed to the proposal and decided to try to pursue the course on her own.

Emiliano confirmed that Chyna did not decide to go with his patch, TMZ reports.

Chyna gave birth to a child, Dream Kardashian, with Rob Kardashian and another child, King Cairo Stevenson, with rapper Tyga.

Yo, that first pic tho hahaha she look sick, like she in her last stages of A.I.D.S  Smh

The bride of chucky lol

The new face of corona virus

Nothing can fix that sort of ugly.