Harlem Maintains Its Black Pride Despite Increase of White Residents 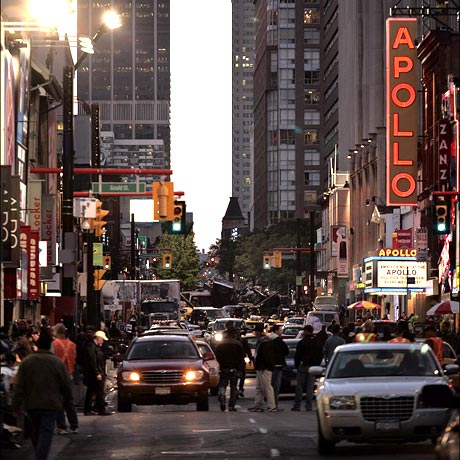 It’s been a while now since Harlem has been undergoing gentrification. Luxury condominiums and brownstones are the norm, and designer stores and boutiques seem to fit right in. Walking around, there are more than a few white faces that seem to have also found a place in what would have been a no-go zone just 20 years ago.

Even the businesses have had upgrades as seen in the bars and restaurants along Frederick Douglass Blvd. a.k.a “restaurant row.” Their clientele are a good sign of the renaissance of Harlem – black, young, hip, well-educated, and affluent.

But when it actually comes to the business and commercial development, it gets a little bit more complicated as it is the Black residents who are embracing and thankful for the new amenities and opportunities while they hold on to the Black pride that is being cultivated and, in a sense, promoted in the new Harlem.

Kwame Binea, 32, arrived in New York eight years ago and knew Harlem was the place he wanted to be. “In Harlem, I could finally breathe,” the part-time barman and full-time artist and musician said. The heritage, culture and art scene was a place he could fit in with ease. And then, of course, there was the matter of the affordable rent.

Born in Ghana, Binea came to the US via London and found a place where he could be accepted as one with the community whose members have helped him with everything — from his music videos to serving as a social safety net he can fall back on.

Also moving to the community from Africa, by way of Scandinavia, is celebrity chef Marcus Samuelsson who opened his famous Red Rooster restaurant in 2010. Born in Ethiopia and brought up in Sweden, he had been a Harlem resident for many years before he decided to open his restaurant. He paid homage and his respect to the ways things are done in Harlem by joking he had to get the equivalent of a “PhD in Harlem” before taking on his venture.

Once he did, he played a critical part in defining a specific kind of Harlem chic and even other businesses acknowledge his impact by referring to times in the history of the city as “before Red Rooster” and “after Red Rooster.”

“Harlem is changing. As a person living in my community, like anything that will change, I have a choice to take part in that change and to make sure that I respect the things that were built here before us. So that it’s not just completely washed out,” Samuelsson said. Perhaps, the perfect concoction will eventually come out of Harlem. Only time will tell.

HIS COMMUNITY????  chef Marcus Samuelsson IS NOT EVEN FROM THE UNITED STATES AND i'M SURE HE DOESN'T IDENTIFY WITH BEING BLACK---HE'S MERELY TAKING ADVANTAGE OF AN OPPORTUNITY