A senior United States official says prominent attorney Dana Seetahal was murdered earlier this year in a “well planned and orchestrated hit” by an international “player” with a crime organization presence in Trinidad and Tobago.

“It was not a crime of opportunity where someone felt they should steal her handbag and then found they had to shoot her. This was a well planned and orchestrated hit. This is not something you plan easily,” said United States Assistant Secretary of State William Brownfield during a teleconference with Caribbean journalists.

Seetahal was shot dead on May 4 after she left a casino for her home. No one has been arrested and charged in connection with the murder despite a TT$3.5 million (One TT dollar = US$0.16 cents) ransom offered by the Trinidad and Tobago government and Crime Stoppers for information leading to a prosecution in the death of the former special prosecutor and president of the Law Association of Trinidad and Tobago.

Brownfield, who is responsible for International Narcotics and Law Enforcement Affairs in the US Department of State, said that Seetahal had been murdered two days after he paid a visit to Trinidad and Tobago.

“Those in Trinidad would know that I visited your country two months ago and two days after I left there was the brutal murder of Ms Dana Seetahal. She was murdered by a trans-national drug organization,” he said, adding the murder was committed by “organised crime with an international player that has a crime organisation with presence in Trinidad and Tobago”.

“I stand by what I say, this was quite clearly not a crime of passion, this was not a crime of opportunity. People did not just happen by and believe that they could steal her pocket book and then find that they had to open fire in order to accomplish this. This was a carefully planned operation,” Brownfield said.

“And there is only one kind of entity that does contract murders of this sort of degree of sensitivity and that is organised crime,” Brownfield said, adding though that he was not suggesting that it was an international player who ordered the killing.

“I am saying that it was a criminal organisation that clearly had a presence in Trinidad and Tobago which decided to perform this repulsive and repugnant act,” Brownfield said. 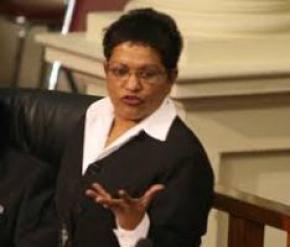 "It's shocking. Crime is a concern especially violent crime. It's a shocking incident, one you least expect.

"I had a conversation with her at around 12.45 pm on Saturday and everything was fine.We need to work as a country together", Acting Police Commissioner Stephen Williams told one newspaper.

Seetahal, a former lecturer at the Hugh Wooding Law School here, had been shot and killed after the gunmen who in two vehicles blocked her Volkswagen Sports Utility Vehicle (SUV) in Wooodbrook, just on the outskirts of the capital.

Media reports said one of the vehicles blocked the road while another with the gunmen inside pulled alongside with the occupants firing upon her vehicle.

Comment by Qupet on May 4, 2014 at 11:29pm
@Kelly
Oh please kamla is corruption herself buy you are right on the button every single member in congress are surely corrupted all for the love of money

Comment by Qupet on May 4, 2014 at 9:52pm
Thank you Sando for the info.
But with the government themselves that are cause to the crimes in the country for the love of money for themselves I don't know about the crime slowing down anytime soon.

Breaking news in T&T because she was the top prosecutor and also a magistrate and legal adviser to the T&T Govt. She was also a jovial and down to earth person who will go to public places like the casino and mingle with the general public. She was  also the prosecutor in an ongoing sensitive kidnapping case of a former prominent female  business woman who was murdered even though the ransom was paid. Suffice to say that the whole nation is in shock and saddened by this great and senseless loss. Looks  like the criminals in T&T are ruthless like the some central and south American counterparts. It is now up to the T&T nationals to stand up and start fighting this serious cancer/crime that has taken over this once peaceful twin island republic because the local law enforcement authorities cannot do it by themselves. You can't keep a good woman down !   RIP Dana Seetahal and my mother was happy to know you personally.

Comment by Qupet on May 4, 2014 at 9:19pm
This is what kamla should keep her focus on and not a mother spanking her child for exposing herself to the world.