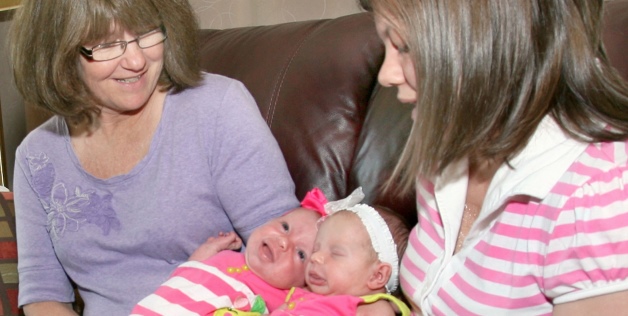 Susie Kozisek just became a grandmother for the third time, which would be a snoozer of a story save for the fact that she has given birth to all of her own grandchildren. The 53-year-old from Iowa has been the gestational carrier for her daughter, a process that involved harvesting eggs and sperm from the parents and then implanting the resulting embryo into Kozisek's uterus. "I heard about the procedure on a talk show and decided to check out the possibility of me doing this for [daughter Ashley Larkin]," she said. Her daughter can't get pregnant due to a medical condition. Kozisek's newborn twin granddaughters will join their 2-year-old sister. But do they call her Mom? Or Grandma? Or just Mrs. Kozisek? [Source]

I think this is a great story. How much trust, love and devotion this shows between mom and daughter. Grandma had the health capacity and the intellectual ability and the opportunity to do something wondrous as giving birth. When the children are old enough to understand, they can tell them what happened and what it means. Only those who don't understand the science will find it weird. But biologically, Grandma allowed the young'uns to live in her house for 9 months. I love this story....!!!

Comment by Joy on August 16, 2013 at 6:59pm
Its a wonderful story to tell them later in life and i applaud her for doing that for her daughter. She should be a very proud grandma.

But tech speaking are those not her children !!!! Oh and by the way your grnadmother birth ya but your my kids !!!! HUH what ? LMAO

they would call her grandma of course, they're not hers, dum dum

I don't know if she was to give a gift maybe a car!!!! modern science is great but I find that a little freaky !!! Thats all

Comment by Kay Smith on August 16, 2013 at 9:54am
So many babies in the world without parents or love, couldn't they have adopted?

um im lost for words, god bless them all. I guess!!!

Good for her, she gave her daughter a beautiful gift.  God Bless them all!