GOP turns on Trump: Senate votes 59-41 to repeal declaration of an emergency at the border with Marco Rubio and Mitt Romney leading 12-strong Republican rebellion 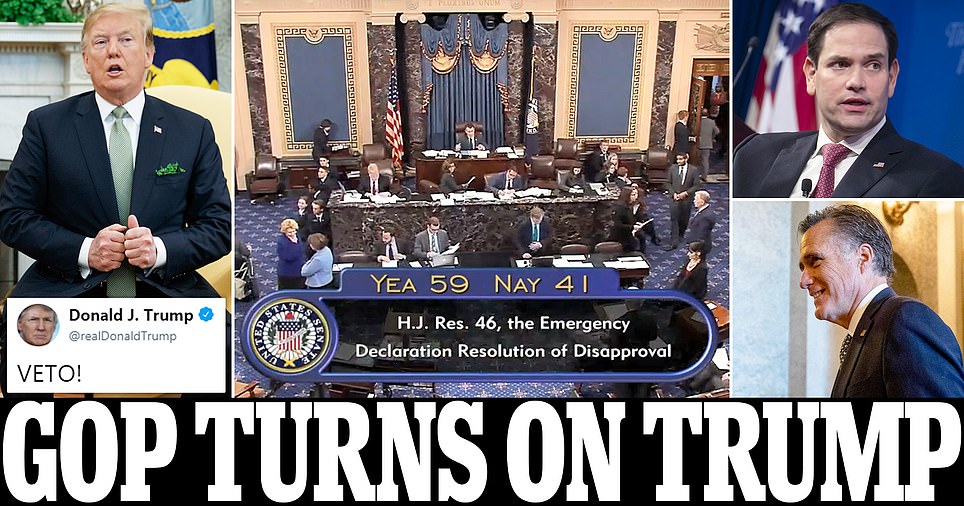 The Senate voted Thursday to terminate Donald Trump's declaration of a national emergency on the border in the most significant legislative rebuke he has suffered as president.

The 59-41 vote included 12 Republicans who bucked the president to support the measure, which had already cleared the Democratic-run House. The most prominent rebels were Marco Rubio and Mitt Romney.

GOP support for the resolution, which appeared to mushroom in the last 24 hours, was enough to easily ensure passage, setting up the first veto of Trump's presidency.

Trump didn't take long to reveal how he would respond. He blasted out a one-word tweet in all capital letters within minutes of the vote: 'VETO!' he said.

Elaborating a half-hour later, the president said he couldn't wait to exercise his constitutional authority to rebuff Congress for the first time since he took office nearly 26 months ago.

'I look forward to VETOING the just passed Democrat inspired Resolution which would OPEN BORDERS while increasing Crime, Drugs, and Trafficking in our Country,' he tweeted. 'I thank all of the Strong Republicans who voted to support Border Security and our desperately needed WALL!'

It was unclear on Thursday afternoon how long it would take for the resolution to reach Trump's desk. He has ten days, excluding Sunday, per the U.S. Constitution, to send the unsigned bill back, or cave and sign it.

After Trump vetoes the measure, the House and Senate would each have to muster the two-thirds majority to overturn it. That would mean six more Republicans flipping from Trump's side. 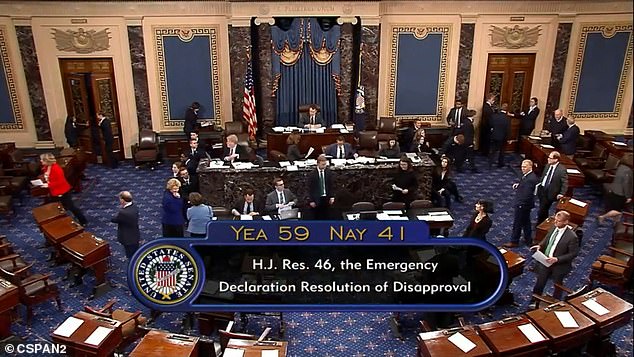 Voted down: The moment the Senate decided against Trump's declaration of a border emergency after 12 Republicans rebelled 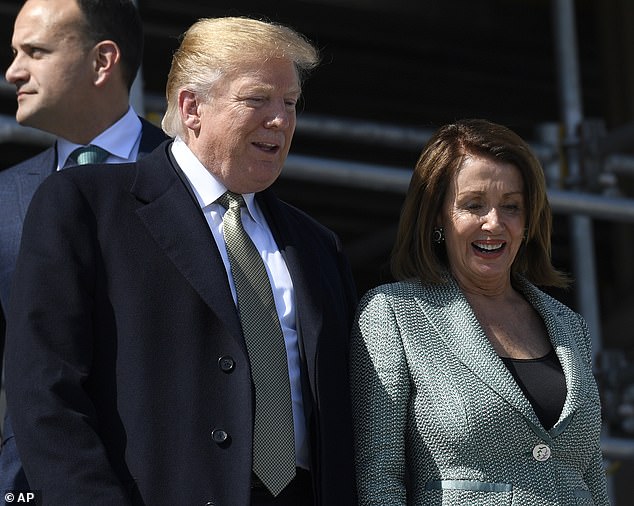 Donald Trump says he will veto a bipartisan resolution senator passed today that terminates his national emergency. He had put on a show of bonhomie with Nancy Pelosi on Capitol Hill at a luncheon for Irish prime minister Leo Varadkar 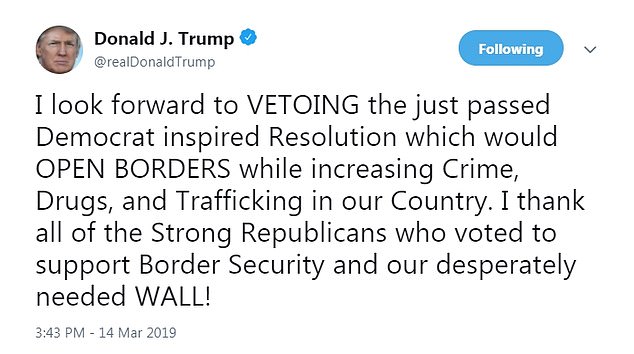 In full: After his one-word VETO! tweet Trump attacked Republicans who had voted against him for backing a 'Democratic inspired Resolution' 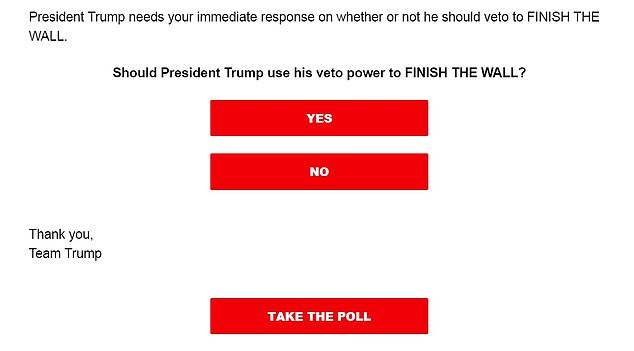 The measure would have the effect of terminating Trump's use of the National Emergencies Act to reprogram funds to build a border wall – despite a standoff with Democrats during the government shutdown that resulted in Trump being denied the $5.7 billion he was requesting for that purpose.

Jerry Moran of Kansas owever, supporters of the measure were short of the 67 votes needed to override his promised veto and lawmakers were leaving town

The vote seeking to turn back Trump on his signature campaign issue came just a day after the Senate pushed back on foreign policy – voting to end U.S. support for the war in Yemen. The war is backed by a coalition led by Saudi Arabia, a key ally courted by Trump.

The Republican-run Senate mobilized to try to overturn the effort after Trump marshaled $6.6 billion more for wall funding than Congress had appropriated using the emergency designation.

Their opposition put Trump in the uncomfortable position of having to censure his own party.

Trump moved to milk the issue not long after the vote by sending out a fundraising email with subject line: 'Veto?' The email blast asked: 'Should President Trump use his veto power to FINISH THE WALL?'

The vote came hours after Trump indicated lawmakers would have to go through him to end his border emergency. He said Thursday that he will use the power of his pen for the first time in his presidency.

A dozen Republicans joined in the rebellion. The list included members of the powerful Appropriations Committee, which has amassed institutional power by steering funds as designated through spending legislation, as well as institutionalists wary of ceding congressional authority to the executive. 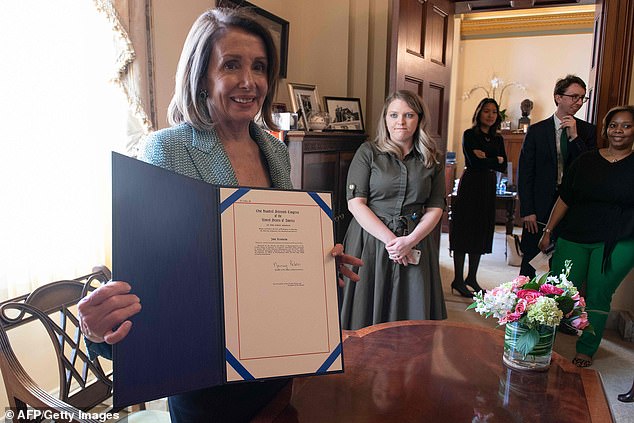 Gleeful: Nancy Pelosi wasted no time signing the bill repealing the declaration of a national emergency. It will go to the president's desk where he has ten days to sign or veto it 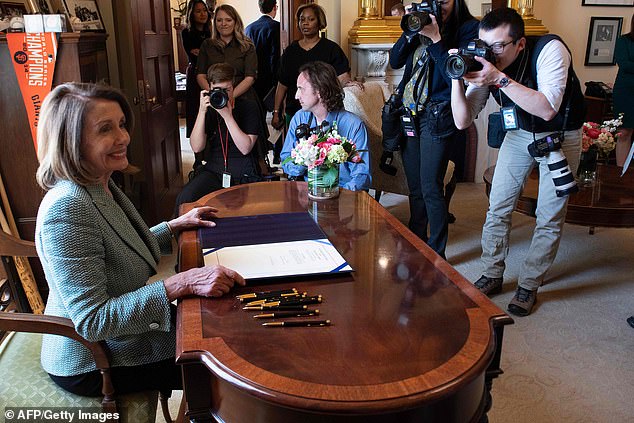 All smiles: The rebuke for Trump from his own party represents a victory for the Democrats

*CLAPPING* They knew he was a risk before he was voted in. They were just too proud to go against the GOP party to save face. Now they see the train wreck.