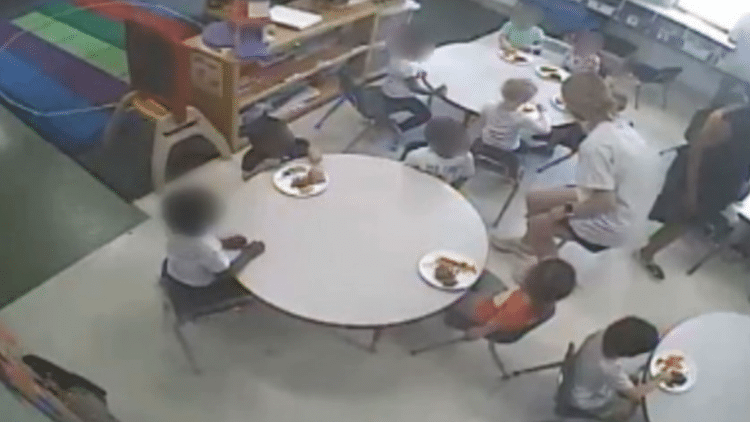 A daycare center in Roswell, GA is being accused of racism after a livestream video appears to show white children being fed lunch first

“They were skipping all of the black kids it seemed like,” Adryan McCauley, father to one of the daycare’s Black kids, told Atlanta’s CBS46. The family said they watched the injustice unfold while checking in on their 2-year-old through a video livestream for the Kids R’ Kids Roswell location.

“All the white kids got their lunch, and all the black kids had to wait,” said McCauley, whose son is in the picture. “From the videos and pictures that we saw today, we are just completely disturbed.”

Toting a screenshot of the livestream, the family confronted the Roswell staff. According to McCauley, the director said she was unaware of any issue because she’s not in the classroom, but suggested it could be “a dietary thing.” The family doesn’t buy that explanation. They shared the story and screenshot online, igniting a social media firestorm.

“I wish that everybody would be able to see the video in entirety first and not just a snapshot,” said David Vinson, President, CEO of Kids R’ Kids. Vinson said he’s viewed the entire video in question. The company issued the family an apology, and said they will use the incident as a training tool

“We wanted to make sure our families know that this is not what we are about,” said Vinson. After talking to the daycare owner, the company is severing ties with the Roswell branch.

As for the daycare, they spoke with CBS46 reporter Jamie Kennedy and gave him the following statement:

“We know the act was random, and the photo doesn’t show the entire room; we believe if the parents viewed the videos they would understand. I wish they could see the compassion we have.”

I just don't get it.  Why is it our people rather than getting our own, we keep expecting other cultures to cater to us and treat us with respect and dignity.  What is wrong with our people?  Can't we see we will always be treated like 2nd class citizens?  Man our people just not smart.  Always begging for equality.  Wake up folks!

Comment by vaughn mitchell on April 9, 2021 at 11:05pm
Wtf, is wrong with black people, get your own freaking daycare. The country was on lockdown people lost jobs, my dept saw so many people starting their own business. Start their own en daycare in Georgia, your kids should be in a black daycare, stop giving those racist a******* your money. It is not that hard.

Even if we couldn't see the whole classroom, it shows what we can see the white kids getting their foods first. Black people is not gonna learn, STOP MESSING WITH FOOLS THAT DON'T CARE FOR YOUR MELANIN BACKGROUND. Their cause is not Yours. PERIOD