Some parents thought it was a good idea to let their child ride on the back of an 8-foot-long alligator during a birthday party entertained by a US group spreading awareness about the reptiles. 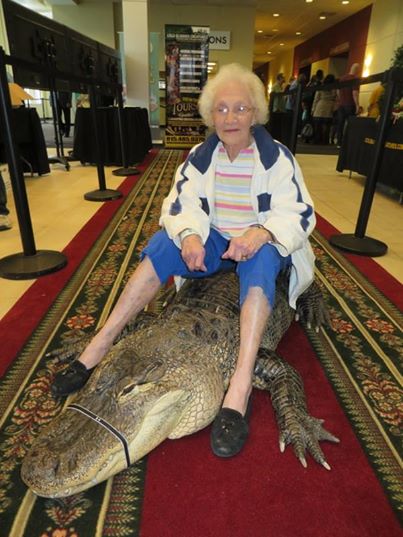 The gigantic predator was filmed walking around the room with the young girl on its back as adults took photos of the moment and laughed in the background.

The girl is seen jumping up and running away from the reptile at one point, but is then coaxed by surrounding adults to return and sit back on its back.

The incident apparently took place at a “Cold Blooded Creatures” event, run by a Chicago-based group that often holds events where people can get into close proximity with alligators, Yahoo News reported.

The Cold Blooded Creatures Facebook page shows its founder, Jim Nesci, performing at school assemblies and even Christmas parties with various reptiles. Nesci says he runs his “Reptile Education” programs under the motto “conservation through education.” The self-taught reptile expert keeps a number of giant creatures, including gators, snakes, lizards and tortoises, in his own house.

Nesci is often filmed alongside Bubba, the 8-feet long, 200-pound North American Alligator said to be “the one and only” gator that takes commands from his owner. Bubba has become somewhat a TV celebrity, and has also appeared on screen with the late Australian animal expert “Crocodile Hunter” Steve Irwin, who was Nesci’s friend.

Comment by Norma on January 14, 2017 at 10:29am
White peoples do anything or eat anything. They a hot mess always have the nerve to call back people's bad names.

Comment by Roots aka TJ What De Ras on January 14, 2017 at 8:45am
Why on earth would they did this. And they have the nerve to call us savages smh

White people are such daredevils.

Comment by Shaneece on January 13, 2017 at 6:41pm
Why are they abusing this crocodile like this? Let him live in peace. Damn. Humans always have to exploit huh.