Fredericksburg police released three videos Friday of an incident that resulted in the resignation of Officer Shaun Jurgens.

Jurgens used his Taser and his pepper spray May 4 on a man who was sitting behind the wheel of his car and appeared to be ignoring police orders.

David Brian Washington, 34, had attracted police attention initially with erratic driving that included striking one car, running over a sign and driving on the wrong side of U.S. 1, police said.

Following a review of the incident, city police administrators determined that Jurgens used excessive force against Washington, who it turned out was having a stroke. He was treated at Mary Washington Hospital and is recovering in a rehabilitation facility. 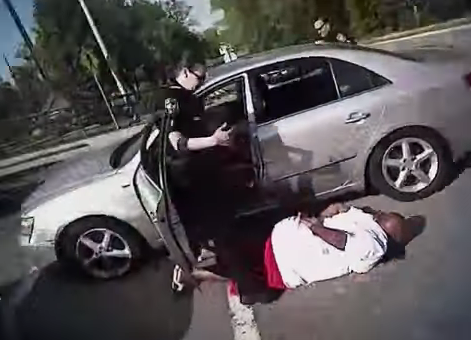 Washington was charged with driving on a revoked license, two counts of hit-and-run and reckless driving.

Jurgens resigned, but insisted that he did nothing wrong. In a statement he provided to The Free Lance–Star, Jurgens explained the reasons for his actions and invited the Police Department to release the videos.

The reasons he cited included concern for the safety of his fellow officers and the surrounding public.

Jurgens maintained he acted appropriately, especially considering that the suspect would not show his hands and had already exhibited reckless behavior.

The released videos came from the body cameras of three officers involved in the apprehension of Washington: Jurgens, Cpl. Matt Deschenes and Sgt. Crystal Hill.

The videos show Deschenes and Hill with their guns drawn as Washington sat in a stopped car at the intersection of Cowan Boulevard and Powhatan Street.

Jurgens showed up a short time later. After repeated warnings for Washington to show his hands and get out of the car, Jurgens fired the Taser.

“Get out of the car or I’m going to [expletive] smoke you,” Jurgens said at one point.

The Taser seemed to have no effect on Washington, and a large amount of pepper sprayed was unleashed into the car.

The officers got Washington out after that and emotions calmed considerably.

The most excitable moment after Washington was in custody was when Hill screamed, “Oh my God. Stop it, stop it” as the car—which apparently was still in gear—backed over Washington’s shoe.

Washington could be heard moaning repeatedly, complaining about his eyes and saying he was feeling sick. He told police he’d been feeling poorly for about a week.

The officers comforted Washington outside the car, telling him that help was on the way and that he would feel better soon.

The May 4 incident began when police got a call about an out-of-control driver who struck another vehicle while driving south in the northbound lanes of U.S. 1 near the University of Mary Washington pedestrian bridge.

The Hyundai Washington was driving had already run into a median and knocked down a sign, police said.

The car had stopped on Cowan Boulevard when police arrived and the events that led to Jurgens’ May 14 resignation unfolded.

Allowd to resign with their pensions...what is the punishment?

Comment by anthony red on June 21, 2015 at 6:56pm
Something has to change, the mentality of these cops boggles the mind.

Comment by Baje009 on May 27, 2015 at 12:22pm
Why would you tase and pepper spray a non responsive person? Problem seems to be that police work is boring 99% of the time so when they get a chance they want to use every piece of equipment they have.

Comment by Monica on May 26, 2015 at 9:45am
What about not handcuffing the man period and trying to help him instead. What in the hell can the man do to u while he is having a STROKE for haven for sake's!!!! If u are that afraid you should not be a police officer!!!!

Comment by Roots aka TJ What De Ras on May 25, 2015 at 4:24pm
Wow. Police work at its finest. I'm curious if someone is not responsive to your orders doesn't that mean something is wrong. I guess they are not use to this

Comment by Norml c on May 25, 2015 at 7:12am
No these cops are working on orders. Who is giving the executive order for cops to murder black men?

at least rinse his eyes out with some water after they handcuffed him....that's pepper spray in there...geez!

he was having a f****** stroke, damn idiot, quick to use pepper spray, and taser on a stroke victim.