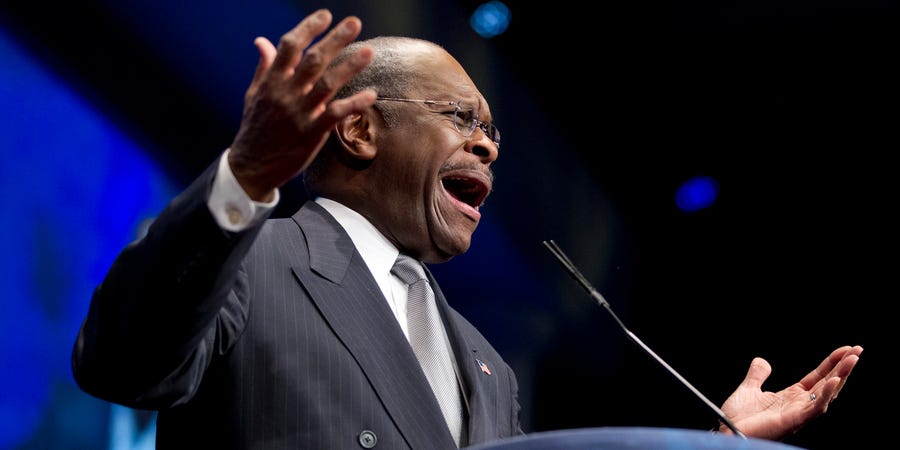 The former Republican presidential candidate Herman Cain has died after being hospitalized with COVID-19. He was 74.

"Cain, who recently joined Newsmax TV and was set to launch a weekly show, died in an Atlanta-area hospital where he had been critically ill for several weeks," the conservative website Newsmax reported on Thursday. "He was admitted on July 1, two days after being diagnosed with COVID-19."

"Herman Cain — our boss, our friend, like a father to so many of us — has passed away," wrote Dan Calabrese, an editor for the website. "He's entering the presence of the Savior he's served as an associate minister at Antioch Baptist Church in Atlanta for, and preparing for his reward."

It's unclear how Cain contracted COVID-19. He tested positive for the disease 11 days after attending a campaign rally for President Donald Trump in Tulsa, Oklahoma. Cain, who was an ardent Trump supporter, tweeted a photo of himself at the rally in which neither he nor those around him wore masks.

Two days after Cain announced he had tested positive for COVID-19, he expressed support for the Trump campaign's decision not to require masks at an Independence Day celebration at Mount Rushmore.

"Masks will not be mandatory for the event, which will be attended by President Trump. PEOPLE ARE FED UP!" Cain tweeted. The tweet was deleted after Cain's death.

A tweet from Cain's account on Wednesday suggested that vaccine skepticism was justified because the US government and the media had "incinerated their credibility." The tweet linked to a post on Cain's website in which a columnist argued that there was "no way of knowing the truth" about whether a coronavirus vaccine would be safe.

Cain's Twitter account posted multiple updates about his condition after he was hospitalized. A tweet on July 5 said he was "making progress." A tweet two days later said doctors were "trying to make sure his oxygen levels are right."

Tweets on Monday said that while Cain was still being given oxygen, his "other organs and systems are strong" and he "really is getting better."

"Herman Cain embodied the American Dream and represented the very best of the American spirit," the White House press secretary, Kayleigh McEnany, said in a statement. "Our hearts grieve for his loved ones, and they will remain in our prayers at this time. We will never forget his legacy of grace, patriotism, and faith."

Lawmakers and allies of Cain's mourned him on Thursday.

As a 2012 presidential candidate, Cain was perhaps best known for his "9-9-9" tax proposal, which advocated a 9% income tax, a 9% federal sales tax, and a 9% business-transaction tax.

Trump considered Cain for a Federal Reserve seat in April 2019. But Cain's nomination fell through after sexual-harassment allegations against him surfaced.

Cain, a onetime CEO of Godfather's Pizza, denied the allegations and said he withdrew from consideration because he would have had to take a significant pay cut for the role.

Was Herman Cain Killed By His Ventilator?

Comment by vaughn mitchell on July 30, 2020 at 4:42pm
He was at the Trump, rally in Tulsa Oklahoma, wearing no mask, silly rabbit truck are for kids. Listen to Trump, paid with his life.