'We don't know what they are and can't explain how they move': Obama confirms UFO sightings by military are real and says they 'must take them seriously' 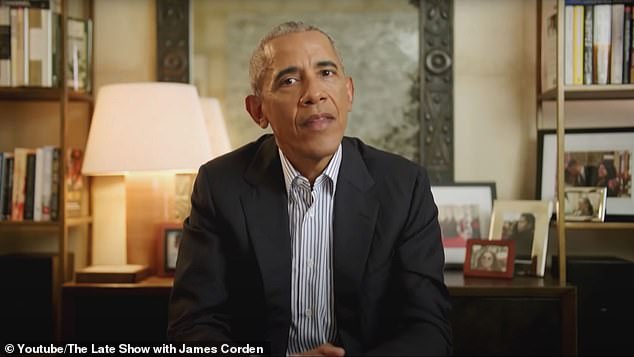 'What is true... is that there's footage and records of objects in the skies that we don't know exactly what they are.

'We can't explain how they moved, their trajectory… they did not have an easily explainable pattern,' he said.

'So I think that people still take seriously trying to investigate and figure out what that is. But I have nothing to report to you today.'

Obama revealed he had been curious about the US Government's research programs into alien lifeforms when he was elected President in 2008.

The 44th President laughed off rumors of a Roswell-style secret lab where alien specimens were kept.

He teased host James Cordon that he knew more than he was letting on.

'When it comes to aliens, there are some things I just can't tell you on air,' Obama said.

'Look, the truth is that when I came into office I asked. I was like, 'All right, is there the lab somewhere where we're keeping the alien specimens and spaceships?'

'They did a little bit of research…. and the answer was 'No,'' he quipped. 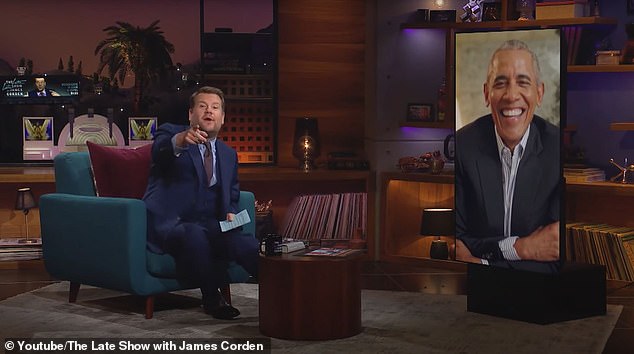 The 44th President laughed off rumors of a Roswell-style secret lab where alien specimens were kept, and teased host James Cordon that he knew more than he was letting on. 'When it comes to aliens, there are some things I just can't tell you on air,' Obama said 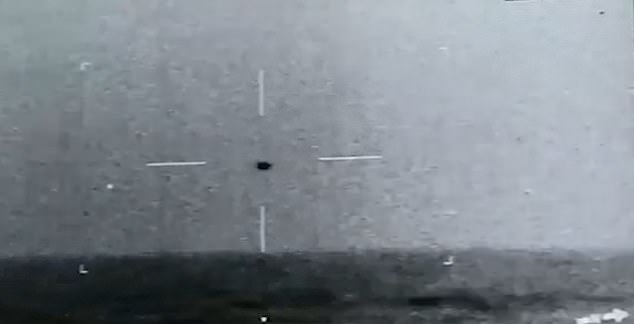 Last week, the video was released appearing to show a UFO buzz a US stealth ship near San Diego before diving under the water back in July 2019 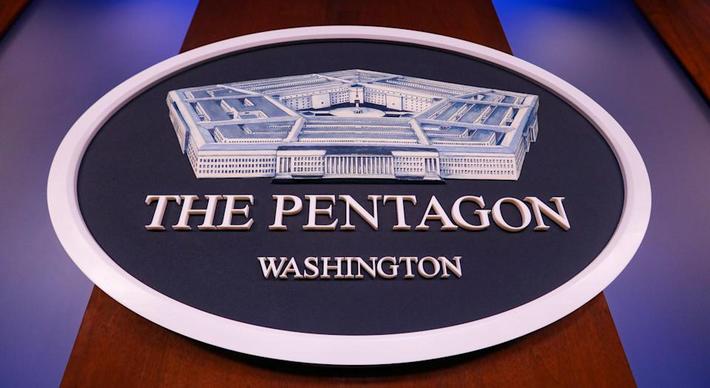 An ex-Pentagon official claims aliens/UFOs are real and flying over the US and the military doesn’t know how to stop them.

Luis Elizondo, who headed up the secretive Advanced Aerospace Threat Identification Program (AATIP), claims the government refuses to publicly acknowledge the  “unidentified aerial phenomena” due to “religious objections, concerns over tarnishing its own reputation and fears of inciting public panic.”

“Some individuals have a problem with this topic because it interferes with their philosophical or maybe theological belief system,” Elizondo told the New York Post.

According to Elizondo, the military doesn’t know who/what is behind the UFO’s, and the slew of UFO footage by the US military are indeed real.

“We are behind the power curve,” said Elizondo of how military bosses choose to ignore unexplained phenomena. “We know that foreign adversaries in other countries are interested in this topic. So there comes a real problem from a national security perspective.”

“As we have said before, to maintain operations security and to avoid disclosing information that may be useful to potential adversaries, DOD does not discuss publicly the details of either the observations or the examinations of reported incursions into our training ranges or designated airspace, including those incursions initially designated as UAP,” Pentagon spokeswoman Susan Gough said in a statement.

“I am not a UFO guy, I am an investigator, my job was simple, to collect the data and speak the truth,” Elizondo told The Sun.

A bombshell government report on UFOs expected to arrive in June, and Elizondo is urging people to “manage their expectations” on what may be released.

“If it turns out we have been leapfrogged technologically by a foreign adversary, then we are dealing with an intelligence failure on the level of 9/11.” he said.

Lol when he was President we were crazy to believe it, now he is telling us how real they are lol, idiots believe more in politicians than they believe in God, id you tell them its a lie but obama tells  them its a miracle, right now they all believe in Dr Fauci, Biden and Pelosi, believe in science take the shot so you can be safe lol

Comment by vaughn mitchell on May 18, 2021 at 11:16pm
People lol, when I told them UFO's are real decades ago. Wtf, people think we are the only planet with life in the universe. We don't have the technology to mess with them. We better take them seriously .

Comment by flint on May 14, 2021 at 1:09am
You can't cover up a UFO no government on earth can cover up any UFO. When a UFO comes to earth every one on the planet will know

IT company in surat

ITAL DIAGNE, I hear that!

Comment by Roots aka TJ What De Ras on May 5, 2021 at 1:50pm
Well we are using alien technology. Plus i wonder who Bill Gates was talking too on lowering the world population by using his vaccines.

This n**** don't know what the hell he is talking about!! All I know and sticking with is that there is something else out there and its Gods army vs the devil and his angels. Good vs bad.

Comment by Johnny Ross on May 4, 2021 at 1:31pm
Ppl are blind or irrational to think there’s nothing else out there..

Comment by vaughn mitchell on May 3, 2021 at 10:04pm
What the hell they think we can do? Alien, technology is way above us. We can't track them or catch them, we are not the only country that is going to deal with this. Whatever secret the government have locked up they better start developing some type of system or we as the human race are double f*****.

i  use foil paper