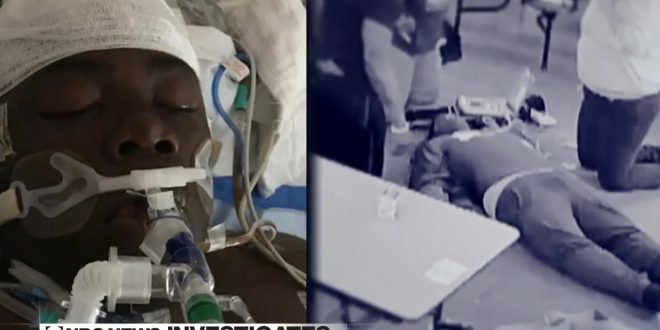 A 16-year-old boy named Cornelius Frederick who was initially restrained by a total of 6 workers at Lakeside Academy located in Michigan died two days later, USA.

One report stated that Cornelius was restrained 10 times prior to this incident with the most recent one being in January when he was held down for over 30 minutes.

The fatal incident took place after the teen started throwing food at another teen during lunch. The Lakeside facility which is intended to care for at-risk youth has been shut down since the incident.

A total of three persons have been charged since the deadly encounter however all three persons plead not guilty, the matter is expected to continue in the courts.

Cornelius Frederick was left with no parents after his mother died when he was 12 years old and his father is currently locked up. Frederick was a ward of the state, Learn more from the NBC news report below.

Sad for this youth, Father felled him, system felled him, This teen didn't have a chance. RIP

sad sut them down

Comment by Sufferahsmusic Media Prod on August 15, 2020 at 6:28pm
Rip youth man you struggles to deal with your pain and disappointments in life.....you were crying out for help yet no one cared to listen ...god speed on your journey young king