Floyd Mayweather Jr. Vs Manny Pacquiao Could Happen May 5, 2012. Both Fighters Ready. Mayweather Tells Pac Man To "Sign The Contract" 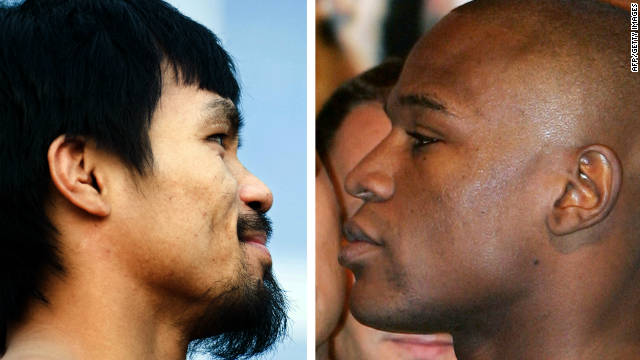 While their advisers continue to play a public relations game with the media and fans, both Floyd Mayweather Jr. and Manny Pacquiao seem to be on the same page. The boxing world wants to see them once and for all settle who is the best boxer in the world today and they agree.

In an interview with Fighthype.com Mayweather said May 5, 2012 is the date the fight should happen.

"I been told the boy May 5th is open. Sign the contract," Mayweather said. "Losing is in Pacquiao's mind because he lost just last week. He lost to Marquez three times. May 5 is the date, sign the contract, I'm waiting. I can't be sitting waiting all day, you want to fight let's make it happen. I'm here, I'm waiting, what's going on? I can sign today. If I sign today you better sign tomorrow. You said you're a clean athlete and you said you'd take the test so let's do it."

Signing the contract is exactly what Pacquiao wants to do according to ABC-CNBNews.

"Negotiations are ongoing for my fight with Mayweather, but nothing is final," Pacquiao said. "Mayweather may be thinking, I can fight Pacquiao now because he had trouble against Marquez, and I was able to beat up Marquez."

RingTV is reporting that Pacquiao's advisor Michael Koncz, went to visit Mayweather at his gym last week and took pictures with the champ.

Top Rank boss Bob Arum told the Manilla Bulletin that he is in talks with two investment groups who want to stage the event. According to Arum the same groups are reportedly also in talks with Mayweather.

“Mayweather is going solo,” said Arum, indicating that Money May will not be negotiating through Golden Boy Promotions.

"This is what boxing fans are waiting for," says Pacquiao.

The stumbling block that had prevented this mega-fight from happening in the past has been Mayweather's insistence that Pacquiao agree to Olympic-style drug testing. That no longer appears to be a hurdle.

"[The lawsuit] is not a problem. That's something that could probably get worked out as part of a negotiation."

That May 5th crap was a PR stunt, its all over the boxing sites. No one from Pacman's camp was ever contacted in any way about that so-called fight. Arum & Roach both said in separate interviews, "there was never any more negotiations brought to them after the last one fell apart, there is no arena scheduled for that match anywhere either. They know how to contact us"...  So how is there gonna be a fight when the guy involved doesnt even know about it? They all heard this fictitious date in the media just like we did, and Fraud's  PR only said it in the heat of an argument because the interviewer was calling Fraud Mayweather a "chicken" over and over... [Probably got mad because he know its true..]

Fraud is the only one holding up this event. It doesnt matter that people that are die hard fans of his think. The proof is all over the boxing sites and blogs. Pac and them has been trying to do this fight for years, these last 2 times is not the only attempts made. More then 3years ago he was challenged when his father was still managing his career. He didnt want Fraud to fight Manny because he said, "hes a south paw and hes good, south paws are very tricky." (This is word for word, im sure its still on youtube) There was no mention of steroids or nothing like that. Funny, haven't heard much about that lately except through a few "KFC" fans that are still hanging on to that even though the so-called problem has been solved a while ago. This guy Fraud is a coward, he dont have the heart and his big mouth has put him in a hole he cant get out of except kicking Pac's butt. His whole world, his "so-called" legacy, reputation and all depends on this fight. Now he needs Pac to truly be viewed as a champion and on of the greats of all time. However, Pac dont need him for any of that, hes already the "POVEN" (without all the BullSh*t lip service) P4P World champion... Not to mention, 17 Titles, 11 of them world titles in several weight divisions... No one has ever done what hes doing and continue to do. He fights everyone, like real champs do, no excuses... Even historians like Burt Sugar, boxers like Hopkins/Ray Leonard/Haggler says Frauds hiding, champs fight champs, the best fight the best. But Micheal Irving said it raw, plain and simple, hes making brothers look bad, we dont run, handle your business. If you come with your best and loose, your still respected because you stepped to the challenge, running is not an option...Nuff said

I will tell you one thing Floyd is no battie mon that is a poor choice of words.The man might be cocky or even arrogant but he is no battie mon.The man is the best pound for pound with an unbeaten record. Pac man is fighting all Mayweather's left overs and Floyd has beaten them convincingly,there was no dispute except for his last fight and he would have knocked the guy out any way there was absolutely no question.So lets get it on Pac Man what are you waiting for are you nervous?lets see how tough you are Packey.

Comment by rampus brown on December 1, 2011 at 1:19am
In my country we call people like Floyd a Battie Mon .

Pac's gonna beat the stuffing outta that turkey. Make him pay for the waiting, slander, disrespect to him and his people, just watch! I always rep. my people but, this dude is a terrible representation of what we are and can be. He needs this a** whoopin to make him into a real man. (Ungrateful selfish bastard)

@Popeye, @rampus brown, @shawn brown, I agree with all of yall comments. Ive said this for a long long time now. Its really simple, if your the best, then fight the best, thats what the true great ones did. Running your mouth is a small part of the game, these days, thats all some of these f*** wanna do, he streets...CLOWNS... Its been so clear lately, even a monkey can see the obvious, suckers get fooled by the bullsh*t artist/fake hustlers...

Big mouth Floyd, but when the time come he going to back out.

Comment by shawn brown on November 29, 2011 at 7:55pm
Mayweather just talkin a lot of sh#t when it come down to business he gonna find a lot of excuses..team par man

Let me tell you something....I am all for my black people to excel in any and everything.  However, NOT WITH THIS SITUATION!!! IF this goes down, I hope Pacman beat his conceited ass!!!!