Finally, a Win for Voting Rights


A federal court struck down Ohio's restrictive voting laws—and there are more cases on the docket. 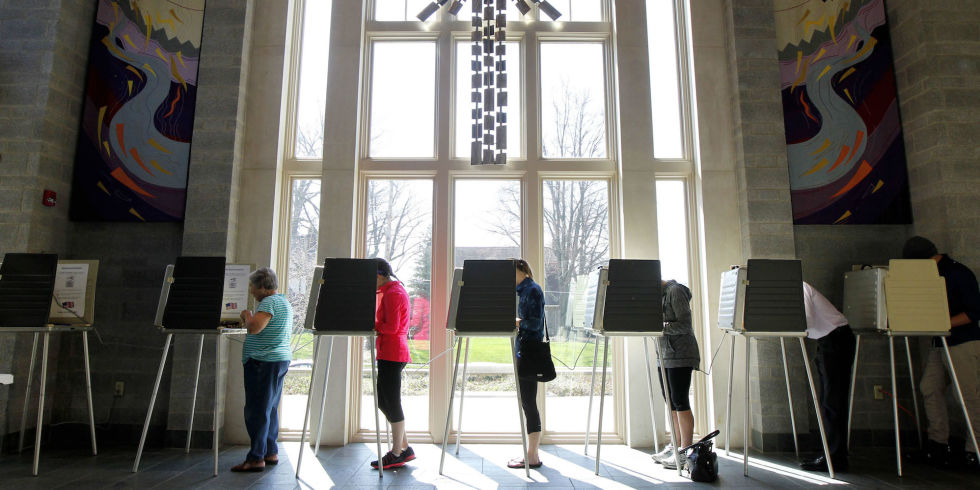 At the top of the good news is a story out of Ohio in which a federal court took the pruning shears to that state's new voting restrictions, as per The Columbus Dispatch.

Judge Michael H. Watson of U.S. District Court in Columbus said the Republican-dominated Ohio legislature violated the federal constitution and Voting Rights Act in 2014 when it reduced the state's early voting period from 35 to 28 days. The move also eliminated the so-called Golden Week in which eligible residents could register to vote and cast an absentee ballot at the same time. Even though Ohio's early voting period is among the most generous in the nation, the reduction disproportionately affected African Americans, Watson ruled. The judge noted that blacks took advantage of Golden Week 3½ times as often as white voters in 2008, and more than 5 times as often in 2012. "Based on this evidence, it is reasonable to conclude that the reduction in overall time to vote will burden the right to vote of African Americans, who use (early in-person) voting significantly more than other voters," Watson said in a 120-page opinion. The legislature's stated justifications for the cutback—reducing fraud, trimming costs, avoiding voter confusion—were weak, said Watson, former chief counsel to Republican Gov. Bob Taft. Watson ordered Ohio Secretary of State Jon Husted and Attorney General Mike DeWine—the defendants in the case—to stop enforcing the shortened voting period.

There will be an appeal, natch. But election law savant Rick Hasen sees bigger fights coming down the road as advocates for the franchise try to employ the tools that John Roberts left them when he gutted the Voting Rights Act and declared the Day Of Jubilee.

With high-stakes voting cases also working their way through courts in such states as Texas, North Carolina and Wisconsin, "There is sorely a need for clarification" of how the U.S. Constitution and the 1965 Voting Rights Act should be applied, said Rick Hasen, a professor of law and political science at the University of California at Irvine. But with the high court operating down one member, the status of election law could remain fractured among conflicting federal appeals court rulings for the 2016 presidential election, he said.

Hasen points out on his own blog that the central issue of the Ohio case—and to other cases in North Carolina, Texas, and Wisconsin, that are wending their way through the federal courts—is Section 2 of the VRA, one of the few parts of that epic statute still operable during the Day Of Jubilee.

One interesting question is why the court focuses so heavily on the impact of these Ohio laws on African-American voters during the part of its analysis applying the Anderson/Burdick balancing test. All of this seems more germane to the Voting Rights Act arguments. On the Voting Rights Act section 2 claim (the issue that has come up in NC, WI, TX and here), the Court follows Sixth Circuit precedent on how to measure the burden, and also makes clear (1) that what other states do should be irrelevant to the analysis and (2) the "non-retrogression" standard of Section 5 should not be imported into Section 2. In other words, in deciding whether Golden Week's cutback violates the VRA, it doesn't matter if places like New York have much more restrictive voting, and just because Ohio offered more in the past does not mean it can never cut back on its voting rules. Both of these points have been hotly debated in the cases and commentary. On the elimination of Golden Week, the Court piggybacks its constitutional analysis to find a burden on African-American voters which is not justified.

Naturally, as Hasen explains, there's a joker in the deck here, thanks to the disinclination of the Senate Majority Leader to do his job. Sooner or later, all or some of these cases are bound to end up before the Supreme Court—which is still skating a player down these days.

The theories accepted by the trial court are sure to be controversial, and it is not clear how they will fare in the 6th Circuit. However, the Sixth Circuit has among the most pro-voting rights views of both constitutional and voting rights theories (see the discussions around pages 21 and 31 here). The case could well go en banc to the Sixth Circuit, especially because of a potentially likely 4-4 split at the Supreme Court, leaving the Sixth Circuit as likely the last word on the meaning of the Constitution and the Voting Rights Act in the area covered by the Sixth Circuit for this election.

When you combine this case, the North Carolina voting case (currently on fast track appeal to the 4th Circuit) and the Texas voter id appeal (heard today by an en banc court in the 5th Circuit), along with two additional challenges to Wisconsin's voter id law (which was upheld by the 7th Circuit, after a 5-5 split over whether to take that case en banc), there is sorely a need for clarification of the scope of Section 2 when it comes to the"new vote denial" cases. Yet the Scalia-less and Garland-less Court may not be in a position to take these cases now, in that they may split 4-4 on their resolution. It just shows a cost of the vacancy right now.

As always, features, not bugs.