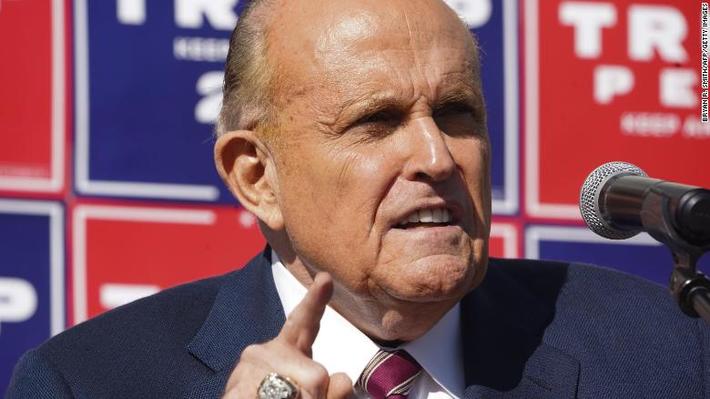 The searches were part of a criminal investigation into Giuliani’s dealings in Ukraine, The New York Times reported first Wednesday, citing three people with knowledge of the matter.

FBI agents were escorted to Giuliani’s apartment by his doorman, a source close to the former mayor told CNBC. 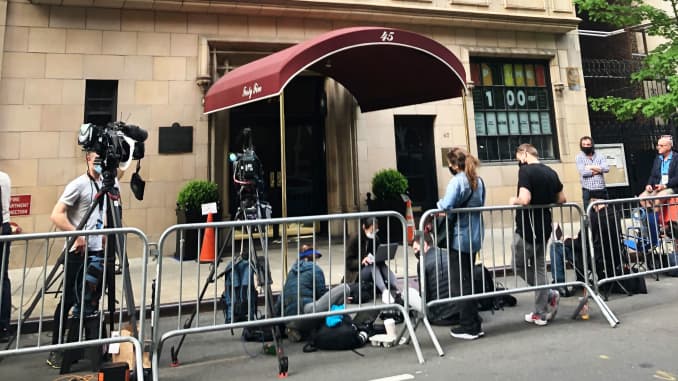 They presented Giuliani with a warrant and requested “all electronic devices,” the source said.

Giuliani gave them one cell phone, one iPad and one laptop, according to the source. The agents left after about 45 minutes, the source added. The warrant for Giuliani’s office also authorized the seizure of electronic devices there.

A source told NBC that FBI agents also executed a search warrant at the Washington-area home of the Republican lawyer Victoria Toensing, who is close to Giuliani.

Toensing — who is married to and law partners with former top Washington, D.C., federal prosecutor Joseph diGenova — represented Ukrainian oligarch Dmytro Firtash, who himself is the subject of a federal indictment in the United States.

The source said no additional warrants were executed Wednesday other than the ones targeting Toensing and Giuliani.

The diGenova-Toensing law firm released a statement early Wednesday evening, saying she was told she wasn’t a target in the probe.

“Ms. Toensing is a former federal prosecutor and Senior Justice Department Official. She has always conducted herself and her law practice according to the highest legal and ethical standards,” the statement said. “She would have been happy to turn over any relevant documents. All they had to do was ask. Ms. Toensing was informed that she is NOT a target of the investigation.”

Giuliani is a former United States attorney for the Southern District of New York, the same office that is investigating him.

Federal prosecutors in New York last year sought approval from top officials at the Department of Justice to ask for a search warrant for Giuliani’s electronic communications, NBC reported.

A source familiar with the investigation told NBC on Wednesday that prosecutors had sufficient grounds to obtain a search warrant late last year.

But the source said it was just “a matter of timing,” suggesting that the Justice Department — which oversees individual U.S. Attorney’s offices — may have wanted to wait until the Trump administration ended in January.

A lawyer for Giuliani, Robert Costello, said the authorities arrived at the Upper East Side apartment at 6 a.m. and seized electronic devices during the search, The Wall Street Journal reported.

The investigation is looking into possible violations of foreign lobbying rules, and the search warrant sought communications between Giuliani and others including conservative columnist John Solomon, Costello told The Journal.

Costello called the search “legal thuggery,” according to The Journal. 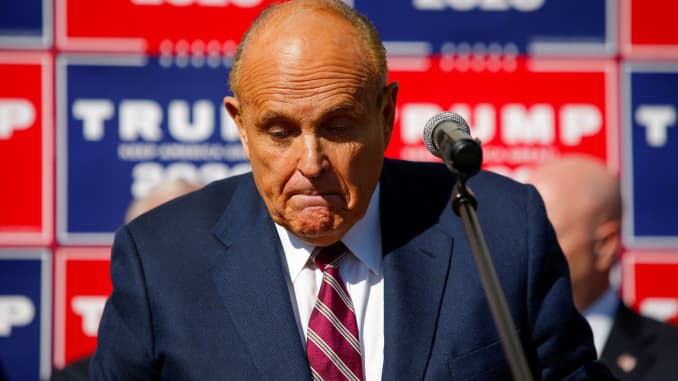 Giuliani tweeted Wednesday that he would issue a live statement on WABC-AM Radio in New York at 3 p.m. ET. But he failed to appear on that station as scheduled, and the show at that time, hosted by Dominic Carter, discussed the New York City mayoral race.

Costello, in a lengthy statement to NBC later Wednesday, accused the Justice Department of a “corrupt double standard,” comparing its treatment of Giuliani with “high level democrats whose blatant crimes are ignored, such as Hilary Clinton, Hunter Biden and Joe Biden.”

Costello’s statement also claimed the materials taken are “replete” with information that is protected under attorney-client privilege.

A spokesman for Trump did not immediately respond to CNBC’s requests for comment. The Justice Department and a spokesman for the SDNY declined to comment.

Giuliani tried in 2019 to dig up damaging information on Hunter Biden, in connection with the younger Biden’s business dealings in Ukraine.

The efforts by Giuliani, Trump and others in his orbit to pressure Ukrainian officials to investigate the Bidens — or at least announce an investigation — prompted House Democrats to impeach the former president for the first time. Democrats argued Trump’s reelection ambitions prompted the dirt-seeking efforts.

The Senate, then held by Republicans, acquitted Trump.

Federal prosecutors in Manhattan were known to be reviewing Giuliani’s bank records in connection with the investigation of his activities in Ukraine.

Giuliani reacted to the investigation last winter, asserting in a furious tweet that the federal investigators were acting as “secret police” to help Biden.

“They want to seize my emails. No reason. No wrongdoing. Attorney-Client privilege.?” Giuliani tweeted on Dec. 22.

The search was the second time that investigators from the SDNY had raided the property of someone who served as Trump’s lawyer.

The first was Michael Cohen, whose office and home were searched three years ago this month.

Cohen, once a Trump loyalist, later turned against his former boss and pleaded guilty to multiple crimes related to the ex-president and the Trump Organization. Trump and Giuliani both excoriated Cohen following his plea in November 2018.

Cohen is currently cooperating with an ongoing criminal probeof Trump and his business that is being conducted by the office of Manhattan District Attorney Cyrus Vance Jr. That investigation focuses on possible bank and insurance fraud involving Trump Organization real estate assets, among other issues.

In a tweet Wednesday, Cohen reacted enthusiastically to news of the raid on Giuliani’s property.

Andrew Giuliani, the former mayor’s son and a former Trump administration official, told CNN last week that he would travel to Trump’s Mar-a-Lago resort in Palm Beach, Florida, to discuss a possible New York gubernatorial bid with the ex-president.

Andrew Giuliani speaks to the members of press outside the apartment of his father Rudy Giuliani, the former President Donald Trump’s personal attorney and the former mayor of New York City, after FBI has executed a search warrant in Manhattan of New York City, United States on April 28, 2021.
Tayfun Coskun | Anadolu Agency | Getty Images

Meanwhile, in Manhattan, journalists and onlookers were still gathered outside of Rudy Giuliani’s apartment building as of early Thursday evening, as “It’s the Hard Knock Life” from the musical “Annie” blasted from a nearby car.

A man driving by asked whom the crowd was waiting for. “Steve Bannon,” a woman replied jokingly, referring to Trump’s former top advisor and campaign chief. Before he left office, Trump pardoned Bannon, who had been under federal indictment.

When he was told that the reporters and photographers were waiting for Giuliani, the man then cracked: “Giuliani got raided today? About time.”

Comment by mr1stroke on April 30, 2021 at 1:41am
Lol niggers are so concern about white people's business, but what are the benefits, what do you niggers gain? Lol at the end jail or not white people will be fine, and i have never been a fan of Giuliani, wait how come i am not concern, may be its because my life is too much of a priority, poor niggers may be that time should invest on the community that has become a dump, i mean look at it.