Federal agents clash with 2,000 Portland protesters on 57th night of unrest - hours after DOJ watchdog reveals it's investigating use of force and Trump threatens to send 60,000 more feds into cities

In Portland, thousands of people gathered for another night of protests over George Floyd’s killing and the presence of federal agents recently sent to the city by President Donald Trump. 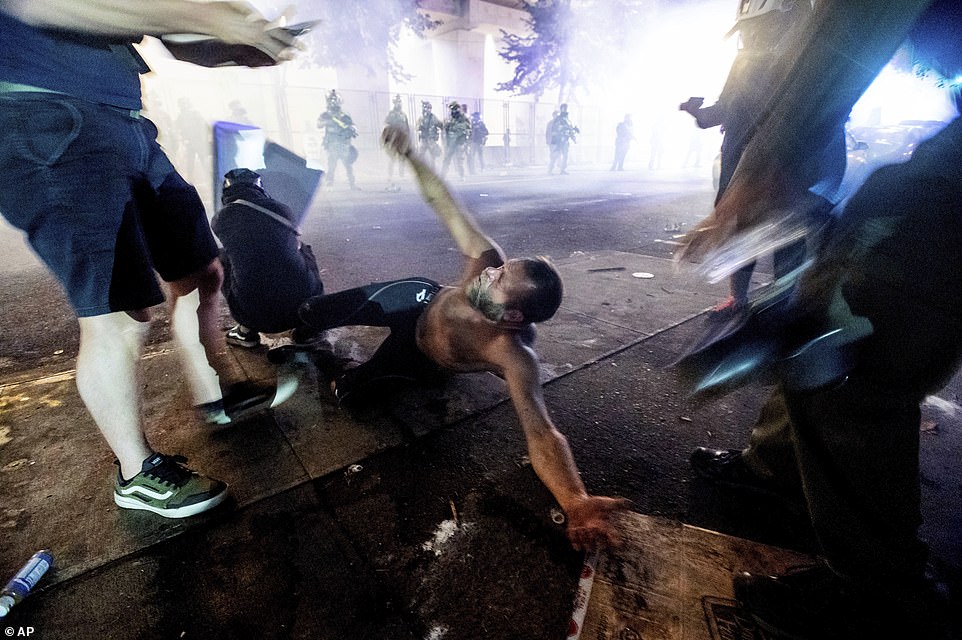 Federal agents violently clashed with Portland protesters overnight just hours after the Justice Department said it was investigating the use of force during demonstrations and President Trump threatened to send 60,000 officers into more cities.

The bloody standoff between protesters and authorities, which lasted into the early hours of Friday, marked the 56th straight day of unrest in Oregon's largest city as residents continue to demonstrate against racism and police brutality.

Portland has become the scene of a controversial crackdown by federal agents, ordered by President Donald Trump, in a bid to stop violent protests that have been ongoing since the death of George Floyd two months ago.

The mainly peaceful Black Lives Matter demonstrations ended overnight like many before it - in a violent showdown between protesters and law enforcement.

Positioned behind a steel fence, federal agents started firing tear gas at protesters outside the federal courthouse shortly after midnight after demonstrators attempted to take down a steel security fence set up to keep them at a distance and a small group lit a fire at the entrance of the building.

Agents declared an unlawful assembly after saying they were being hit with projectiles and lasers. They forced protesters to back up a block from the courthouse before retreating to a different corner of the building and confronting demonstrators there by lobbing more canisters that bounced off the walls and into the crowd.

In violent scenes, agents could be seen firing off crowd control munitions, or rubber pellets, to disperse the protesters as clouds of gas rose from the area and flash grenades could be heard. Bloodied protesters, many who were helmeted and wearing face masks, were seen being treated by street medics during the clash. 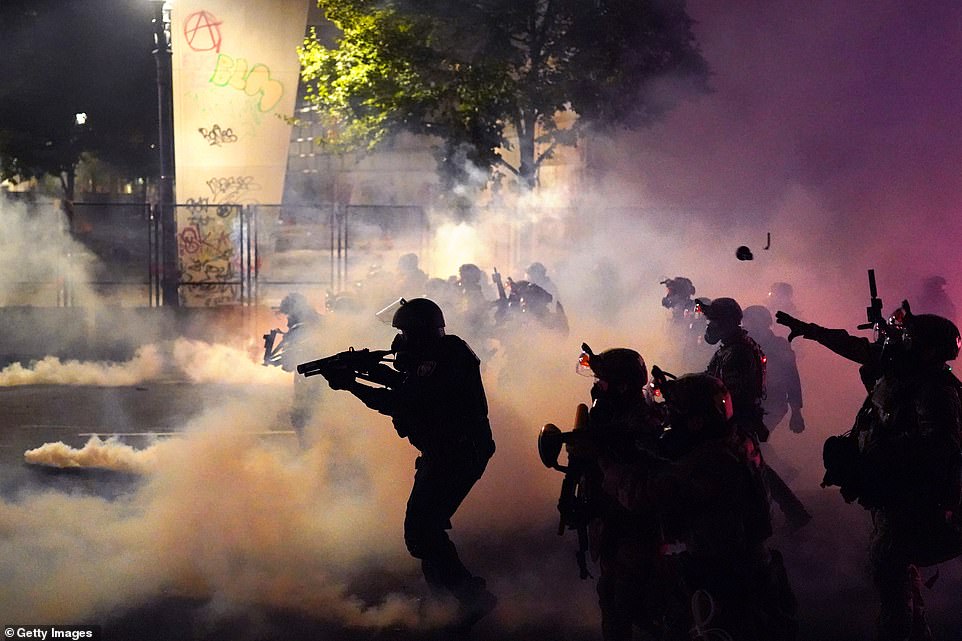 Federal agents fired tear gas and rubber pellets into the crowds of protesters outside the federal courthouse in Portland, Oregon overnight in the 56th night of unrest 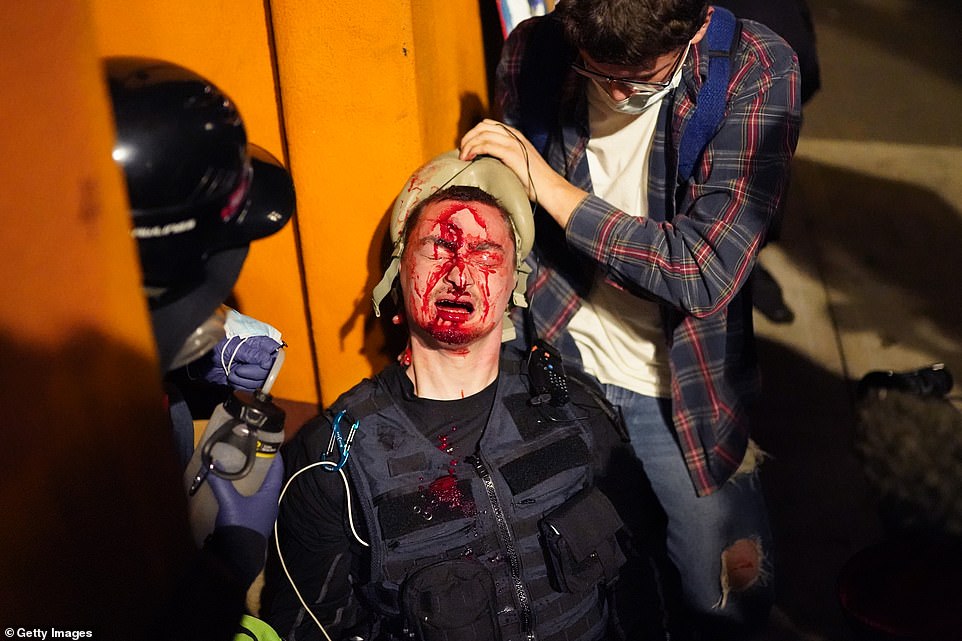 Bloodied protesters, many who were helmeted and wearing face masks, were seen being treated by street medics during the clash 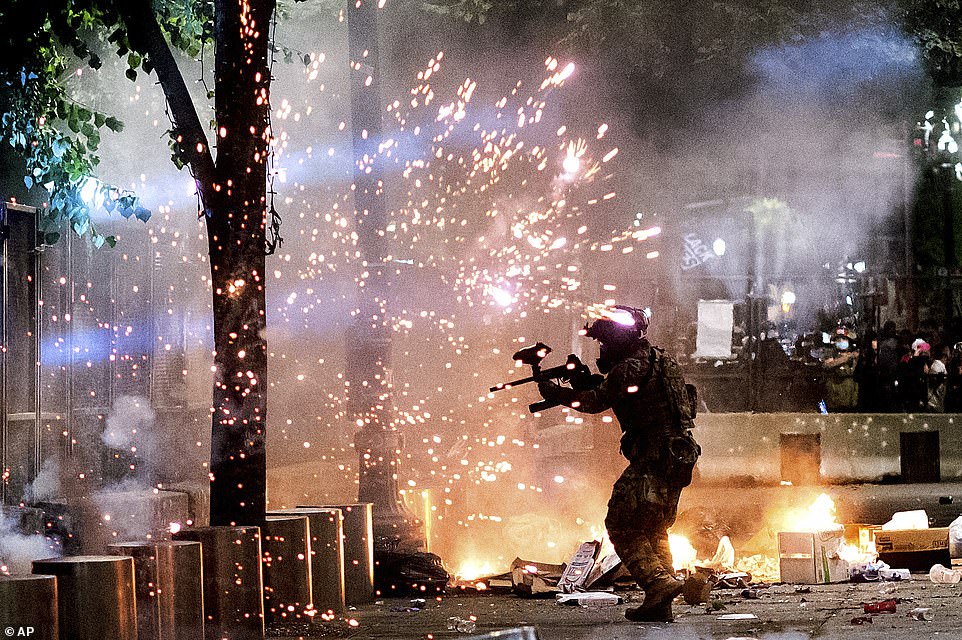 In violent scenes from the city, agents could be seen firing off crowd control munitions, or rubber pellets, to disperse the protesters

The clash came soon after the the Justice Department's watchdog said on Thursday it was investigating the use of force by federal agents in Portland during protests against racism and police brutality.

Inspector General Michael Horowitz said his office opened the probe after civil unrest escalated in the past week following claims of camouflaged federal agents using force and snatching people from the streets and putting them into unmarked cars.

While most demonstrators initially took to the streets of Portland after Floyd's death in late May to call for police accountability and reform, some say they now have different reasons.

Protests in Portland directly linked to Floyd's death started to lose steam in early July before the reports emerged of federal officers taking demonstrators away in unmarked vehicles.

The Department of Homeland Security, whose law enforcement agents are facing fierce criticism for their actions in Portland, said its internal watchdog was also conducting a probe.

The violence overnight unfolded just 24 hours after Portland Mayor Ted Wheeler, a Democrat, was among those tear-gassed during another clash after he was mostly jeered by protesters as he tried to rally them and a demonstrator threw shrapnel at his feet.

President Trump, who has labeled the demonstrators as 'agitators & anarchists', reveled in the fact the mayor had been teargassed in an interview with Fox News' Sean Hannity Thursday night. 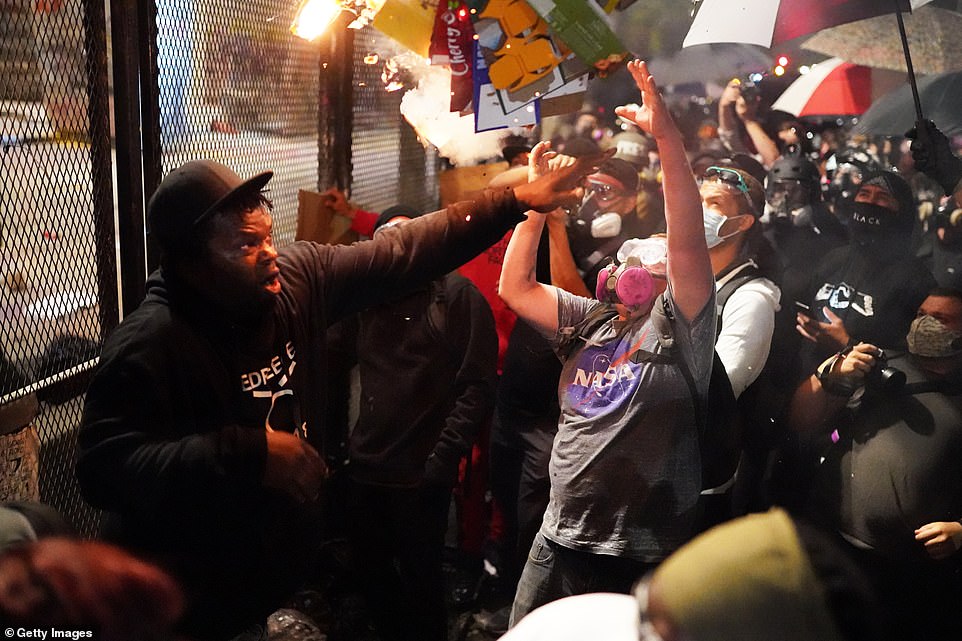 The bloody standoff between protesters and authorities, which lasted into the early hours of Friday, marked the 56th straight day of unrest in Oregon's largest city as residents demonstrate against racism and police brutality 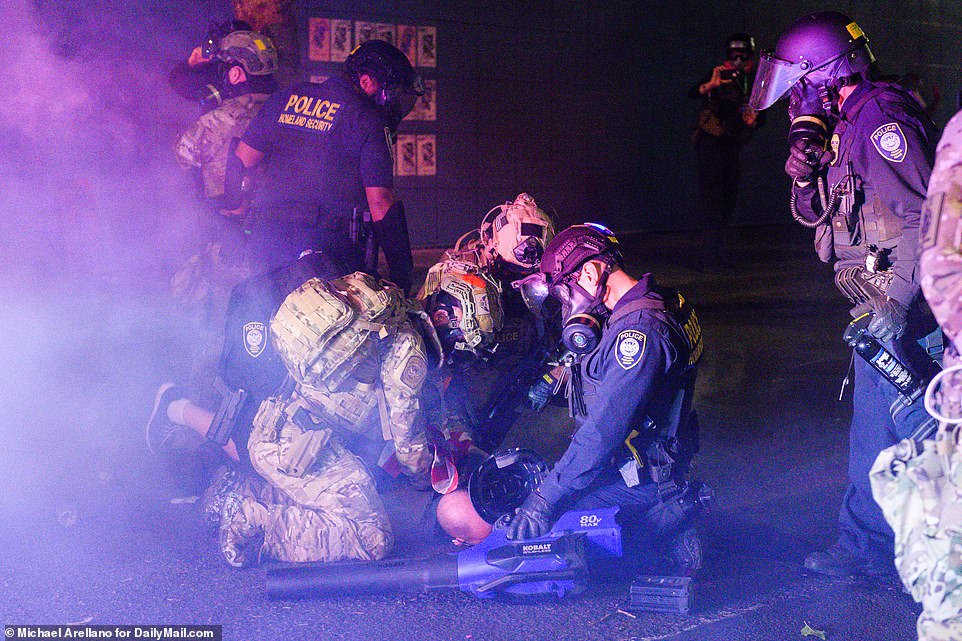 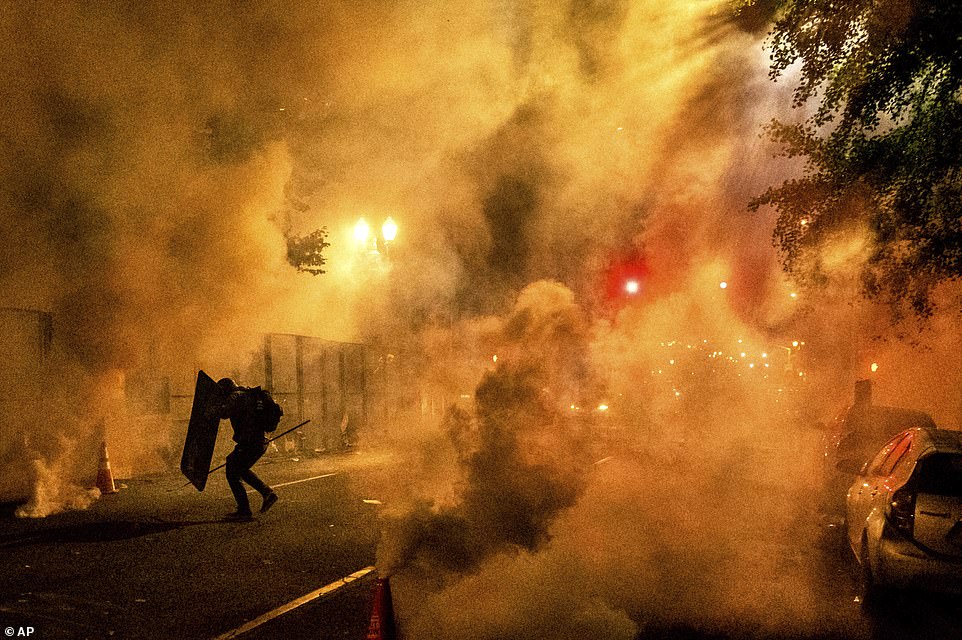 A protester lies on the ground as federal officers, seen in background, used tear gas to disperse the protesters
Federal agents deploy tear gas as clashes with protesters escalate

'We have this Mayor Wheeler who I think is also the police commissioner and he made a fool of himself,' Trump said.

'He wanted wanted to be among the people so he went into the crowd and they knocked the hell out of him and that was the end of him. It was pretty pathetic.'

Demonstrators and local officials see the deployment of the agents in Portland as a ploy by Trump to drum up a 'law and order' campaign as he faces an uphill re-election battle.

Wheeler has called the intervention an abuse of federal power and said it was escalating the violence.

The mayor, however, has been accused by critics - including city council members - of not reining in local police who used tear gas multiple times on protesters before federal agents arrived early this month.

City business leaders have condemned Wheeler for not bringing the situation under control before the agents showed up.

Department of Homeland Security acting Secretary Chad Wolf has denied that federal agents are inflaming the situation in Portland.

He told CBS This Morning that Wheeler legitimized criminality by going to the front of the crowd of demonstrators where the fires were lit and where people were trying to pull down a security fence. 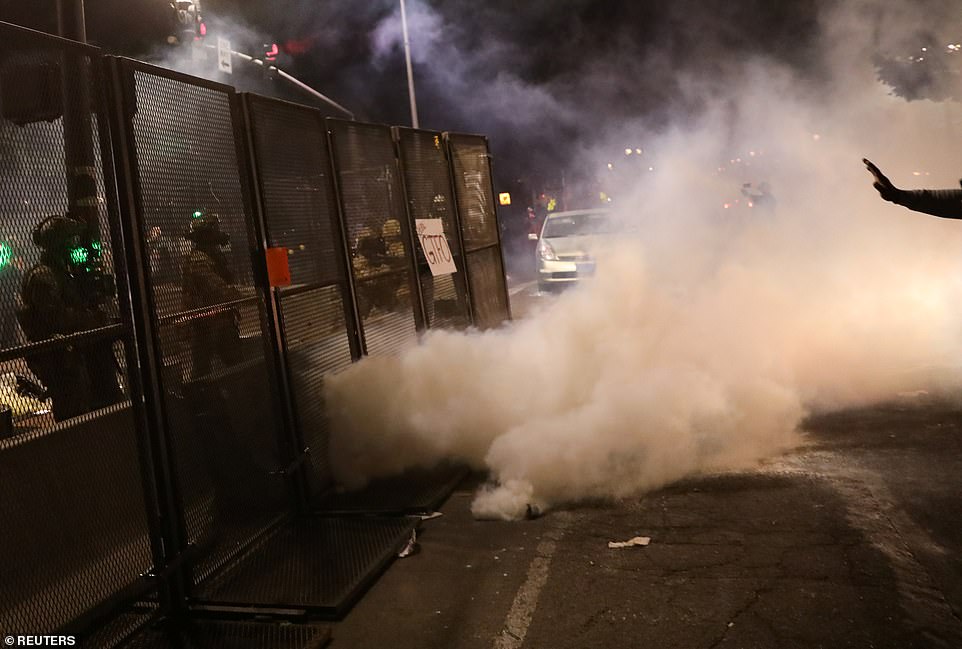 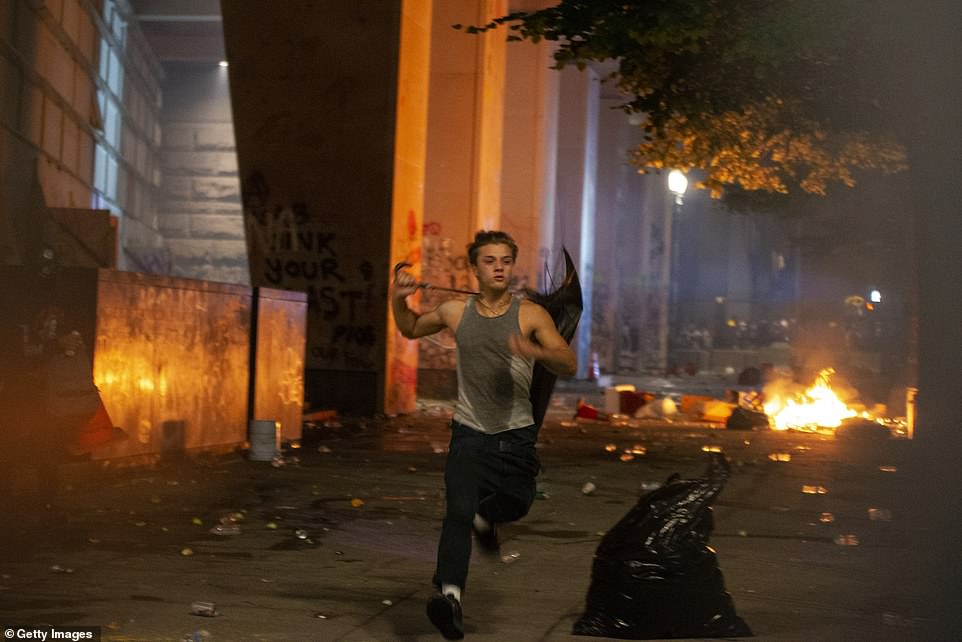 A protester runs toward a gap in the Mark O. Hatfield U.S. Courthouse fence after the crowd outside of the barrier warned that federal officers were coming for him

Officials in Portland are pushing back against the federal agents, with a judge granting a temporary restraining order on Thursday that bans them from arresting legal observers and journalists at protests.

His threat came as his law and order takeover extended to Seattle on Thursday when a special response team of federal agents was drafted to stand by for duty in the city.

Chicago also geared up for a surge of federal agents after Trump threatened to send in the troops to help tackle an uptick in gun violence.

Local officials, however, have warned they would draw the line at any Portland-style deployment.

'We're not going to allow the unconstitutional, state-sanctioned lawlessness we saw brought to Portland here in Chicago,' Mayor Lori Lightfoot said on Twitter. 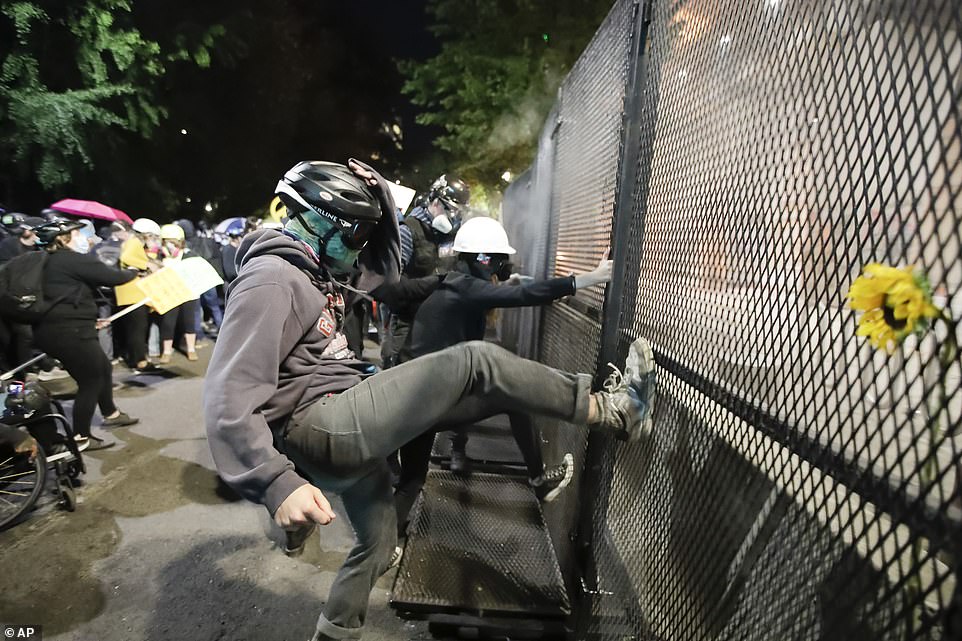 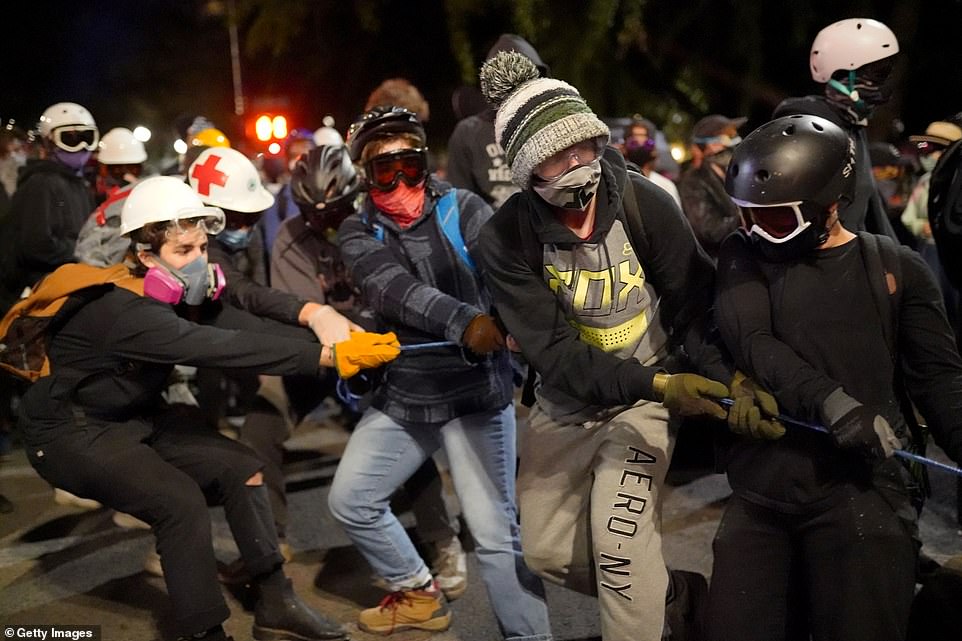 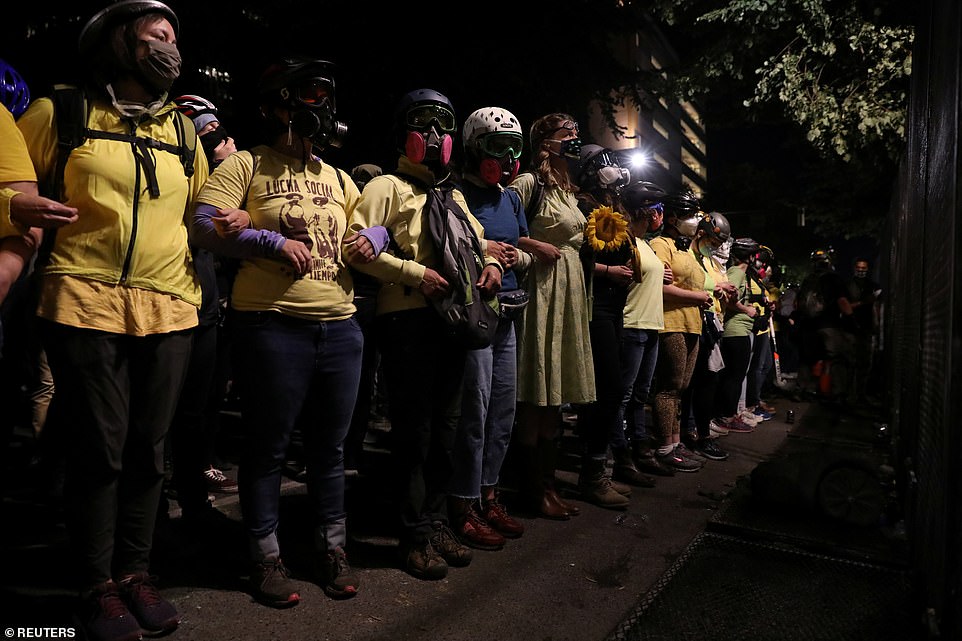 Women, now known as the wall of moms, link arms to act as a shield for Black Lives Matter protesters outside the courthouse. Just days earlier, federal agents pushed back against the women with footage showing them shoving some of the women in the chest while using tear gas to break up the crowds 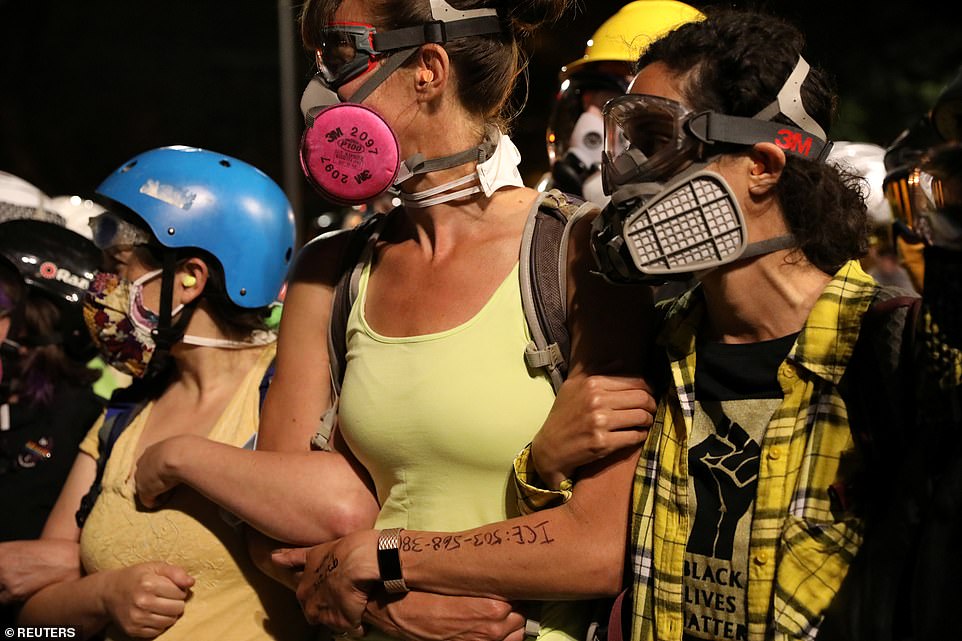 Comment by vaughn mitchell on July 25, 2020 at 2:23am
Look at all the white people out their protesting. Trump think he is a dictator. He keep this s*** up America will riot more let him think people are going to back down.