Fans express concern for Madonna, 64, after she appears unrecognizable with bleached eyebrows 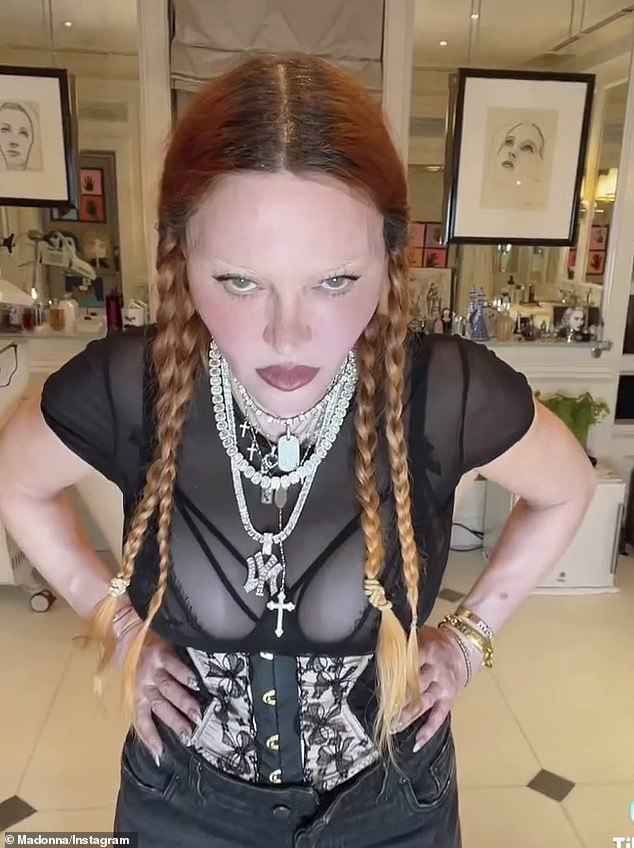 Madonna fans are expressing concern for the popstar after she posted TikToks looking nearly unrecognizable, prompting some to compare the pop icon's new look to Marilyn Manson.

In the video, the Like A Virgin singer, 64, angrily lip-synced along to the track Vent by rapper Baby Keem.
'Have you ever been punched in your motherf**king face? What you say, oh you haven't? Alright, wait!' the lyrics to the song read.
Madonna furiously lip-synced along to the track with a halting appearance featuring red braids and bleached eyebrows - a trend embraced by many younger stars at the moment.
A listers from Nicole Peltz to Kylie Jenner have embraced the trend, which is supposed to enhance the prominence of other facial features, which can appear quite harsh. But it doesn't seem to have stopped stars as big as Madonna from adopting the look.
She also put on a busty display in a sheer black top worn beneath a lace corset.
The Material Girl singer was also decked out in dazzling jewelry, including diamond necklaces, gold bracelets, and a silver grill.
She posted a far more risqué video to her TikTok, where she danced around in a lace bra, high-waisted underwear, and even twerked for the camera.
'What happened to you? You look like Marilyn Manson or something! Don’t shave the eyebrows!' one concerned fan wrote on Instagram.
Madonna rocks pigtails and aggressive demeanor in TikTok video 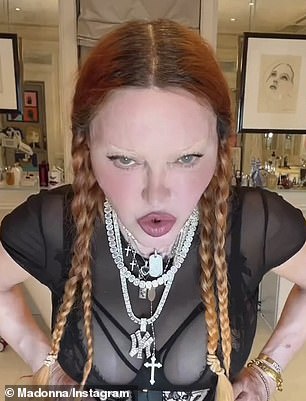 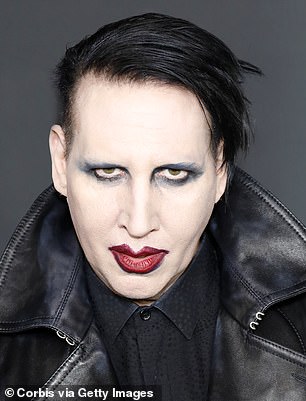 Express yourself! Madonna let out her frustrations in yet another bizarre video posted to her Instagram account on Thursday, where fans compared her to Marilyn Manson (right)

Busty display: Madonna flashed her cleavage in a sheer black top worn along with a corset

Her fans compared her to Marilyn Manson and asked the singer: 'What happened to you?'

Another called for her to 'retire' and said 'the Madonna I used to admire was the one on The Immaculate Collection...this woman has lost all of her mind.'

A fan named Lainey said the popstar 'used to represent female confidence,' but now she was only a 'sad, scared, insecure, old person.'

Others called the displays 'disturbing' and questioned if the bleached-eyebrowed woman was even Madonna herself.

'Is that really her? Surely not?' Ellie Michelle wrote on TikTok. 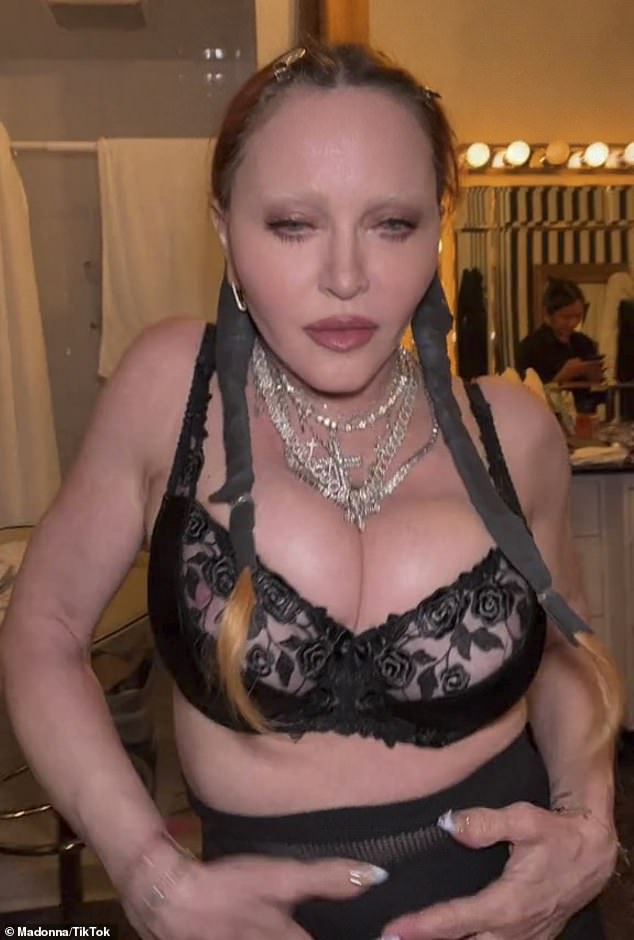 She posted a far more risqué video to her TikTok, where she danced around in her lace bra, high-waist underwear, and twerked for the camera 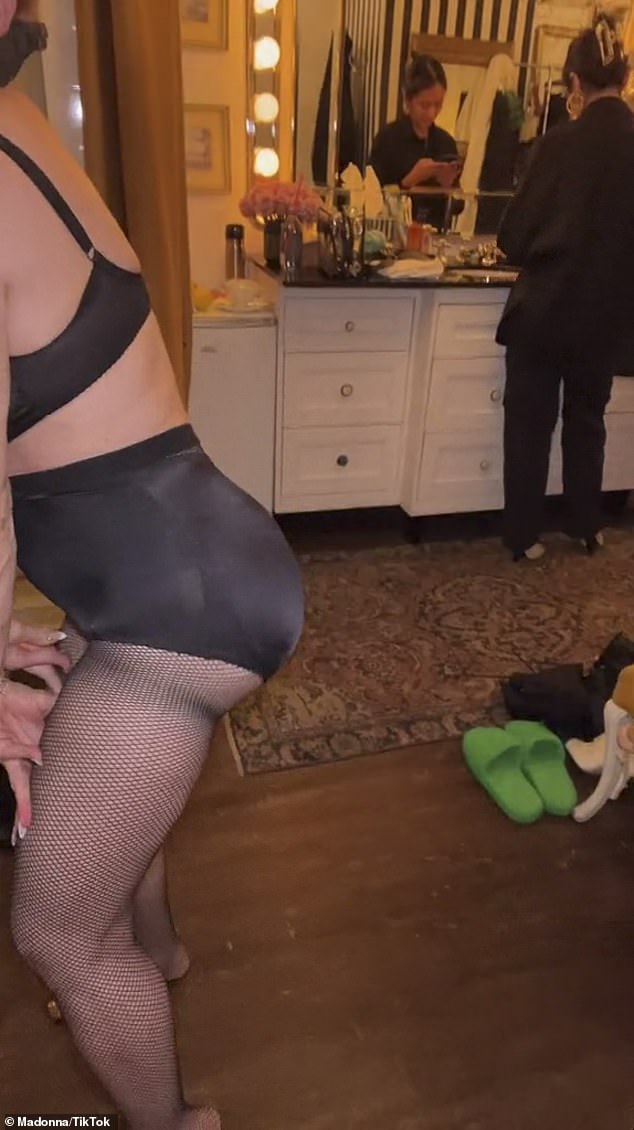 Shake it! The Queen Of Pop twerked for the camera in her underwear and fishnet stockings

Madonna has been causing a stir online as of late.

Last month, the Queen Of Pop briefly fell out with Cardi B when Madonna insisted that she'd paved the way for young artists to embrace their sexuality.

The backlash against the singer came after Madonna wrote about the 30th anniversary of her book, S.E.X , and how she had been vilified for her openness.

'30 years ago I published a book called S.E.X. in addition to photos of me naked there were photos of Men kissing Men, Woman kissing Woman and Me kissing everyone,' she wrote on Sunday.

Madonna continued: 'I also wrote about my sexual fantasies and shared my point of view about sexuality in an ironic way.'

The Borderline singer went on to express that she was the target of criticism from less open-minded individuals.

'I spent the new few years being interviewed by narrow-minded people who tried to shame me for empowering myself as a Woman,' she recalled.

Madonna then remarked that she 'was called a w****, a witch a heretic and the devil' during the period of time.

The hitmaker went on to express that modern entertainers were allowed to be much more open about their sexualities.

'Now Cardi B can sing about her WAP. Kim Kardashian can grace the cover of any magazine with her naked a** and Miley Cyrus can come in like a wrecking ball,' she said. Madonna then concluded her statement by writing: 'You're welcome b*tches.

Cardi seemed particularly peeved about the clown emoji and the use of the word b***h'.

Responding on Twitter, the Bodak Yellow singer wrote: 'I literally paid this woman homage so many times cause I grew up listening to her ...she can make her point without putting clown emojis and getting slick out the mouth .. '

She continued: 'These icons really become disappointments once u make it in the industry that's why I keep to myself.'

Nowadays diseases are increasing in children. In this post, you will get to read about such a disease which is happening with every other child. Children becoming overweight at an early age. This is the big problem of today's time. Here you will also get the information of this stssymposium.com link. They get a lot of benefits through this link. who want to be a writer in their career.

Please put it away!