Alkaline Retaliate At Vybz Kartel Fan Who Bottled Him On Stage

Alkaline Bleaching Before And After Photo Goes Viral

Alkaline didn’t take too likely to being bottled on stage during his performance in St. Lucia last weekend.

The deejay was around midway his performance when someone from the audience hurled a water bottle on stage. The bottle hit Alkaline at the side of his head before hitting the back of the stage.

Sources are telling us that the bottle was thrown on stage by a male patron who says he was a Vybz Kartel fan and is upset the Alka is dissing his deejay.

Sources also told us that Alkaline and his entourage was looking for the patron who threw the water bottle at the end of the show.

Alkaline is the latest dancehall artist to bleach his skin and he is feeling a lot of heat for it on social media.

The above photo collage of the dancehall deejay before and after has been making the rounds on Facebook and Twitter.

One of the pic show Alkaline from his high school days at Ardenne High. The other photo is more recent showing Alkaline with a much lighter skin tone.

Alkaline bottled and booed in Surinam

Tommy Lee Sparta and Alkaline performed live in Suriname last weekend and their set was mostly well received except for an incident where bottles were being thrown on the stage during Alkaline’s set.

Tommy Lee also brought along members of his Sparta crew including Stylysh and Destiny.

Check out some footage from the show and from their arrival in the Caribbean country.

Dancehall artiste Alkaline had to cut his set short in Surinam over the weekend, after he was booed by several patrons who didn't take kindly to the lyrics of the young artiste.
According to eye witnesses, the deejay was in the middle of performing one of his controversial songs when patrons began to boo the artiste and throw bottles on the stage. Sources say Alkaline tried to perform through the boos, however when bottles began to rain on the platform, he was forced to cut his set short.
Alkaline is known for his sexually laced lyrics and was condemned by some Jamaicans after the young deejay endorsed anal stimulation in one of his songs earlier this year.
Dancehall artiste Tommy Lee Sparta was also booked for the show.

This photo of dancehall deejay Alkaline has gone viral on social media. The images show Alkaline sporting a perm hair and bleach skin.

Alkaline posted the photo on his Facebook fan page and his fans went in. A lot of the deejays fans thinks that he is trying to be like Vybz Kartel.

Sound off in comments below. 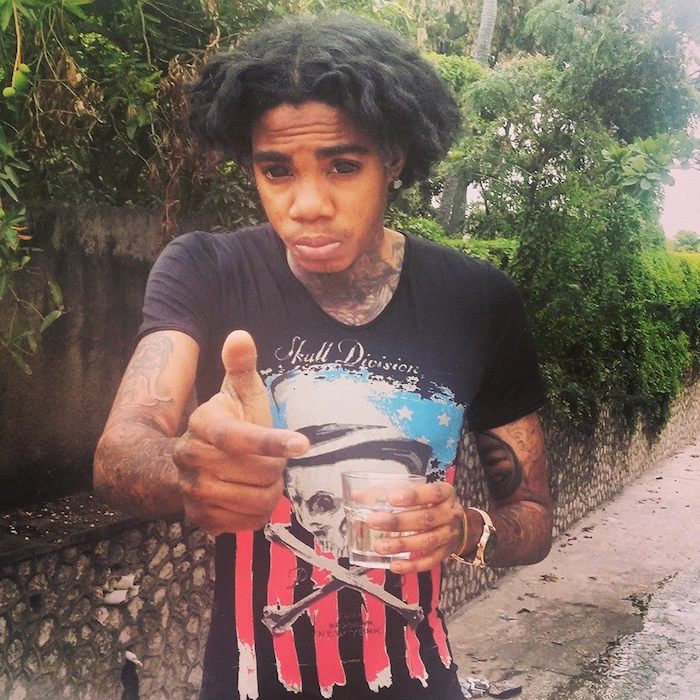 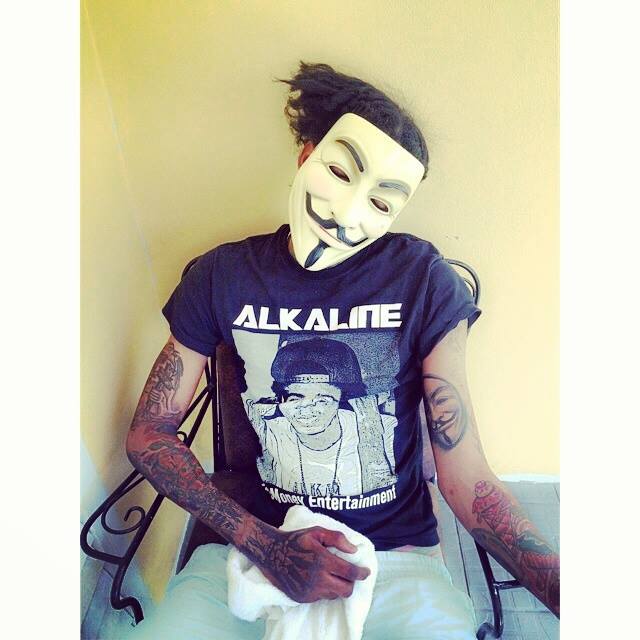 Alkaline created a buzz in dancehall earlier this month by becoming the first Jamaican artist to tattoo his eyeball.

While there were some speculations on whether the tattoo is real or fake, the young deejay confirmed that it is very much real.

Speaking with Anthony Miller of ER, Alkaline says the tattoo was very painful but temporary.

“Yes I really tattoo my eyeball its just a new look for dancehall,” Alkaline said.“Yeah it hurt but pain is temporary.”

Alkaline, who is rumored to be seeing a shrink, says he was not influenced by Tommy Lee’s new demonic movement in dancehall.

“I wouldn’t say that because I sing songs about females and issues that affects the nation such as social commentary,” Alkaline added.

The deejay says the eyeball tattoo is just for shock value, but his mother is very disappointed.

Kids don’t try this at home.

Face tattoos were so yesterday. Today the new trend in dancehall is eye ball tattoos.

Upcoming dancehall star Alkaline shows the world that a tattoo can be done on any part of the body including the eye ball.

The disturbing new trend is not only dangerous, but its scary looking. Perhaps someone is taking this whole demonic trend in dancehall a bit too serious.

See this photo of the tattoo needle touching the eye ball gives you the chills.

To make matters worse Alkaline look like he is 12 years old and check out his single “Church Folks” below.

who are we to judge....the man is a DANCEHALL ATRIST....not a REGGAE artist...all a dem do and say things that corrupt this nation ...if hunnu naw like it..don't buy, listen or attend they show....who-so-ever throw the bottle should be charge and lock up.....bloody fools

Ilike him as a artist. Just the same amount as delivery as Kartel.

Only TIME will TELL.

He Is Straight Up Boule (Greek Def.) Oh My Goodness He Has An Owl On His Chest, Skull And Bones He Is Down Gone. To become Who he Is He Had To bend Over And catch Many penises. Straight Up Bati Boy. It Is So Sad....Wow He Must Hate Himself Deeply.

What the world is this s*** about? Where is this okay?

Wow he look so good when hes darkskin

Looking demonic? thats the point. Well the devel welcome another fool into him gang.