Folks let me share with you about what happened on Sunday, if any of you listened to the Al Sharpton radio show on WBLS NY you already know what I am talking about, I had to prove to the Black Voters who supports Hillary how they are being condition and sold by their so call leaders. Al Sharpton said in his radio show he did not care about what Bernie Sanders did 40 years ago that he is more concern about what he is doing Now, well ladies and gentlemen the last time we checked Mr. Sanders is still a Senator so his record is pretty much open to everyone if Sharpton is a civil rights activist why can’t he find out? Now that would be the question, so I did my part by calling the radio station, my questions to Mr. Sharpton were: if he does not care about what Bernie Sanders did 40 years ago, why are we still marching, why he is still a civil rights activist, why do we still celebrate Black history Month, why do we still talk about Slavery, than I went on by asking him, why don’t you educate your listeners about Hillary Clinton? Tell them that she was A Barry Goldwater worker and campaign organizer, ladies and gentlemen as soon as I mention that name he cut the line the phone hung up than he was running his mouth on the show, Now that prove to show you how they are all are being paid from the Black Pastors to the political leaders in the community those are little niggers with greed they do everything for a check. 4 years from now every black voters who voted for Hillary Clinton will feel sorry fi she becomes president, I sat and watched her came at the Apollo and I shook my head to see that majority of her black supporters are just idiots, now I am talking to the black voters I don’t care about the white voters it don’t matter who they vote for they will be okay, their community is not in a crisis, but you are a bunch of retards, blind and idiots not one of you ask Hillary Clinton questions about serious issues instead she tells you what she want to tells you, fill you with a bunch of lies just like the slave masters used to do on Sunday morning telling the slaves about God from their own Bibles. Hillary Clinton said she earned 9 million votes well let me help you out it’s a bunch of lies, before the Primaries she was at the super delegates stores buying and purchasing with is illegal so she paid for every one of them it’s all about money, that is why so many super delegates said they will back her down, not Bernie sanders, it’s not about the voters, it’s not about the campaign it’s about money, open up Hillary Clinton’s campaign book, who are her donors everyone from wall streets and also for profit prisons, people do your homework, its 2016 it’s too late to still be dumb, all her donations are coming from big corporations, not from regular voters, Bernie Sanders call out on people like me and you for donations, every $3 to $20 support that campaign, Hillary Clinton was the senator of NY for 8 years what has she done for the black community, so many innocent black men were getting killed by police and guns violence she walked away and became secretary of states when many were being bombed as she covered them up. The Bernie Sanders movement did not happen overnight it took hard work, social media and word of mouth to make sure he packed the St Mary’s park with 30,000 people on March 31, 2016, I stood out there and see young people and older people who are catching up day by day to push this revolution forward, this is a future to believe and a fight that is worth fighting for, there is no difference between Hillary Clinton and a republican in office. I will challenge any black supporters of Hillary Clinton any black leaders who are backing her up in public or national TV where people can ask questions and I guaranty after that you will all look like idiots she just like her, don’t be shy any black supporters of Hillary who feels they want to have a debate to defend her record call the place and time I will drop anything I’m doing and debate you 1 on 1 with facts. For the next few days I will post lots of information about Hillary and you people will not have any more excuses, it will be up for everyone to read and the truth will be with you, if you are concern about your future and your kids future it’s time for you to get and stand with Bernie Sanders in 2016.

Check out the New blog, information you may need before you vote:

The things they dont tell you, this is what they refuse to show you on TV 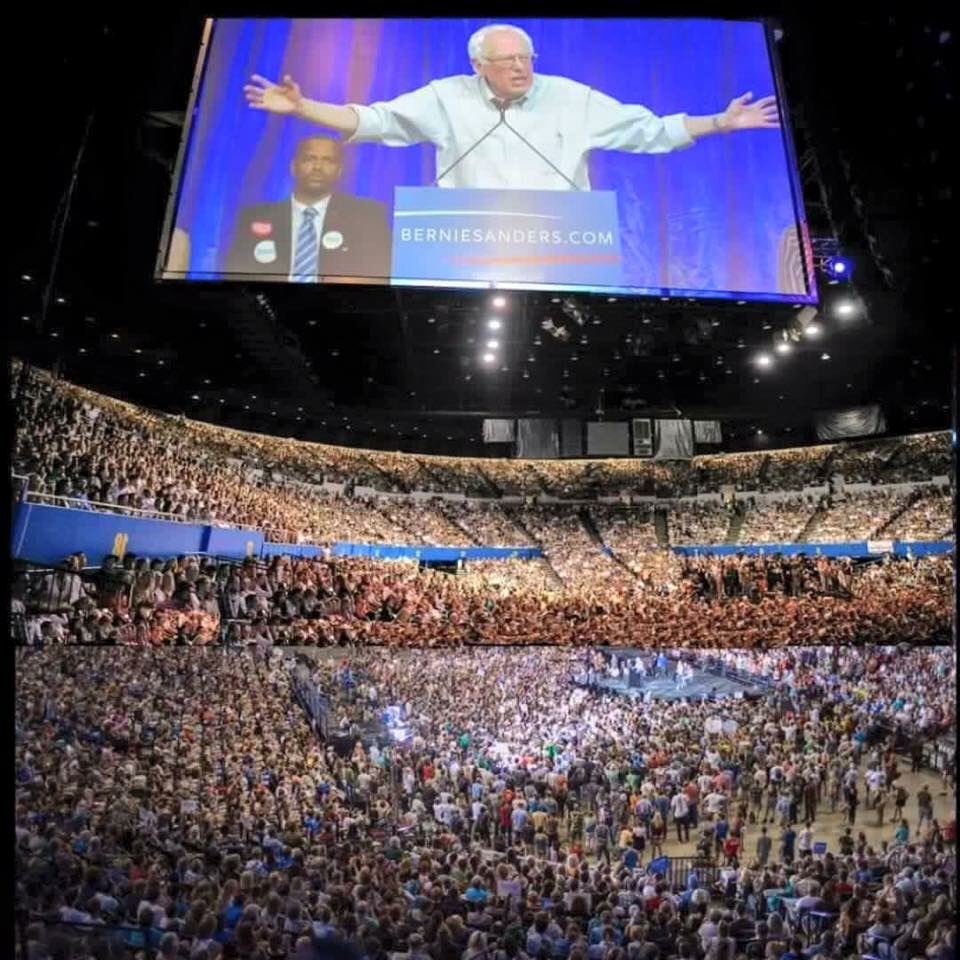 Comment by mr1stroke on April 2, 2016 at 12:00am
Old negro here is another blog I'm working on Since you can't see the agenda of the establishment Hillary is getting all type of favors and special treatments so read


WASHINGTON (Reuters) - The U.S. State Department has suspended plans for an internal review of whether classified information was properly handled in former Secretary of State Hillary Clinton's emails at the request of the FBI, a spokeswoman said on Friday.

by the way you sound like an old negro who suffers from the syndrome of Donald trump such serious topic you want to come with insults, i ignore old negro like you go back to the cave let the new generation takes care of this, if you have fact and information that can help us why not state it, i put facts in my blog google is a beautiful thing these days, use it, by the way explain why Hillary and her campaign refuse to debate. how in the hell the candidates are still campaigning but only limited to 6 debates, why cant they have more debates explain that, unless you can provide facts or answer questions you are not exists state your comments and keep it moving this is for the public

Ron Williams well MR smart negro and dance for the master thanks for coming, now why will Sanders not win, well because old negros like you too busy singing and dancing for Hillary, just the like plantation days, so if you are condition thats exactly what you will do, but you can see the revolution that is taking place, so far you are the only one I know who donates to hillary, otherwise they are all big corporations, well you said she made bad decisions well please tell me where was she in 1972-1988 when Sanders was supporting Jesse jackson, okay every one knows Goldwater was a republican when did hillary become a democrat, when she was secretary of states and senator what exactly did she do for the black community, please share with us, tell us exactly and also where we can find these information, what exactly did her and her husband did for the black community when they were investing in the prison industry so many of black men were wrongfully incarcerated under Clinton, well how about the speeches she is delivering in private to wall street and getting paid from 250k-500k how come the public never heard those speeches, Bill Clinton collected about a billion dollars from the world leaders for the earth quake of haiti, yet they are building fancy hotels for those companies, yet the people have yet to have medical assistance, schools, houses and jobs, where are all that money, for the new few days i will post information about hillary and her husband and will also release the sources, i welcome anyone who stands with hillary only dumb negros sit in front a tv and do as they are told 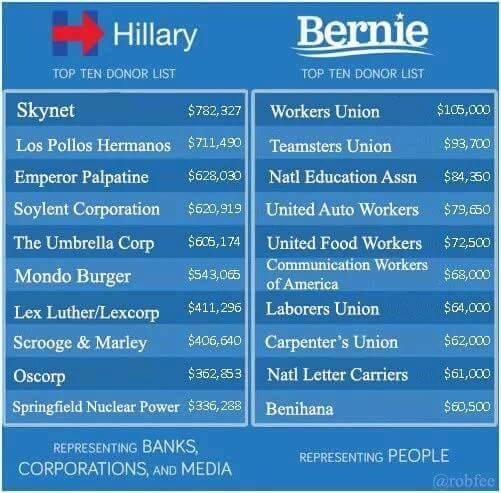 Comment by Ron Williams on April 1, 2016 at 5:11pm
There you go again Mr. Getting it ALL wrong! Sure, Sanders has some great arguments and good policies for the country. The question is can he win in the general election? Sanders is about to start his own SuperPac..don't you follow the news? Wrong AGAIN..she also has millions of small donators..I'm one if them. Campaigns are expensive. Every presidential candidate since the '60's has taken "big money"! Yes, she worked for Goldwater, so what? We all make bad decisions just like Sanders has in the past. You learn and move on... She and Bill did more for "us" in eight years than most of ALL the former residents of the White House did put together. Check your facts, Bro! ...check you facts about Libya too....and her NY State Senator record...facts NOT BS counts. She's no angel but she's tough and she and her husband are the Demorcrats strongest weapons too secure another 4 if not 8 years of Demorcatic control of the presidency. Wake up Mr. 1Stroke....stroke that brain of yours before you post.

Bombahdrop it so sad i watched that lady came at the Appollo all she did was talk to those people tell them what she wanted them to hear, but no one asked questions that had concerned, they did sing and dance for her, so she conditioned them and tell them what she wanted them to hear she do know she is dealing with uneducated people may be half of them cannot read, so she just tell them any lies, after all how will they know, since they wont research or read?